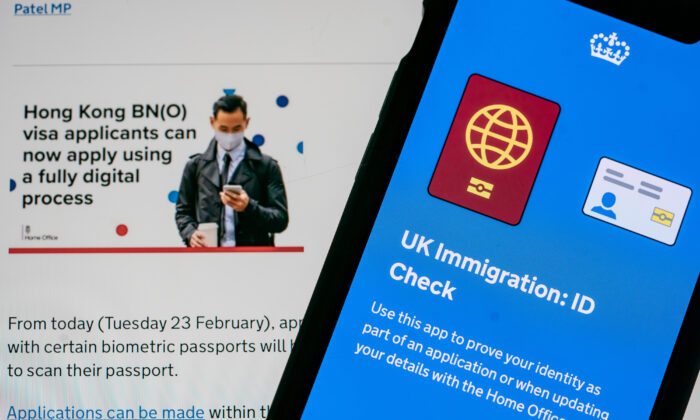 The Hong Kong government introduced the Consumption Voucher Scheme hoping to boost consumer demand, and to save its economy, which has been shaken by the Chinese Communist Party’s zero-Covid policy that Hong Kong followed.

Financial Secretary Paul Chan Mo-po announced Phase II of the scheme on June 13. Hong Kong permanent residents aged 18 or above and non-permanent residents living in Hong Kong for work or study are eligible to receive $10,000 or $5,000 worth of vouchers, in installments, respectively.

However, people who have permanently departed Hong Kong or have the intention to leave, are not eligible for the scheme. Some commentators say that the government singling out this group of people will not help retain talent, and others think that this announcement will create social conflicts.

The criteria for eligibility include whether one has left Hong Kong for two years between June 18, 2019 and June 12, 2022 without a special reason, such as for study or business; whether one has made a valid application for early withdrawal of Mandatory Provident Funds (MPF) before the age of 65 because they are permanently leaving Hong Kong; whether one holds a locally issued Hong Kong Permanent Identity Card; and whether there is evidence or information that leads the government to believe that the person concerned has no intention of returning to Hong Kong in the foreseeable future. Eligibility assessments are conducted based on information collected in the past.

Paul Chan Mo-po, the financial secretary, said that he received queries on why people who have already emigrated can still receive vouchers and therefore decided to exclude emigrants or those intending to leave Hong Kong permanently from the scheme.

Democratic Party spokesperson Poming Chan said, “the Government is targeting people who want to leave Hong Kong, but this will not help to retain talent.”

The Democratic Party’s Facebook page quoted Poming Chan, who suggested that the government should try to attract people who are currently in Hong Kong to stay, and should further think about how to attract those who have already left to return.

According to a recent survey conducted by the organizer of the International Immigration and Property Expo, 79 percent of Hong Kongers surveyed plan to emigrate within two years, and 19 percent intend to leave Hong Kong within six months, with the majority being middle class and wealthy families.

The survey also revealed that 66 percent of the respondents had assets of over HK$8 million (about $1.02 million), with 17 percent of them exceeding HK$50 million (about $6.37 million). As for those with a monthly household income of over HK$150,000 (about $20,000). Of all those who plan to emigrate, 30 percent are in the high income group with a monthly household income over HK$150,000 (about $20,000), suggesting that wealthy families are more likely to consider emigration.

Wai-Kwok Benson Wong, former assistant professor of Government and International Studies at Hong Kong Baptist University, told The Epoch Times that the government issues vouchers because it is their responsibility to boost demand during times of economic difficulties.

“As a Hong Kong resident abroad, he is still a Hong Kong citizen and may return back home. The government has no reason to exclude those who do not live in Hong Kong’s right to have vouchers.”

He said that the government’s action is irrational. One would only speculate on people’s thoughts and even introduce “ridiculous policies or measures” if one sees them as enemies or people against oneself.

Academic: The Government is Stirring up Social Tensions to Create Division

The Mandatory Provident Fund (MPF) is a compulsory retirement savings scheme for Hong Kong people. In order to withdraw from an MPF before the age of 65, certain circumstances must be met, including early retirement, permanent departure from Hong Kong, total incapacity, terminal illness, small balance, and death. After the UK government provided Hong Kong BNO holders with access to the UK for settlement and naturalization, the MPFA announced in March last year that BNO visas could not be used as evidence of permanent departure from Hong Kong or early withdrawal of MPF.

Academic and host of the show “Summit” Jacky Fung asks “So those who are labelled by the government as intending to leave Hong Kong permanently can get their MPF back?” He thinks that Hong Kongers abroad can obtain government verified proof of “permanent departure from Hong Kong” and thus, be able to get their MPF deposits back.

He further commented that the government’s action is self-contradictory, as it does not do anything to attract Hong Kong emigrants to come back but instead created divisions. “I think it is absurd.”