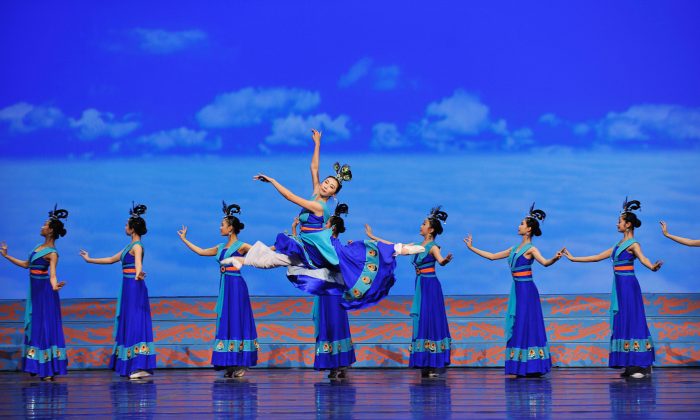 The Chinese regime hasn’t allowed Shen Yun, a show that has dazzled and moved millions of theatergoers, to perform in the country because the show includes acts that portray the persecution of Falun Dafa. Practitioners of Falun Dafa, or Falun Gong, have been brutally persecuted in China for the past 17 years, on the orders of former Communist Party leader Jiang Zemin.

Each year, the communist regime tries various means to disrupt Shen Yun performances around the world. In 2010, Shen Yun was forced to make a last-minute cancellation in Hong Kong, a semiautonomous Chinese city, after its government withdrew visas from six key production techs with just under a week to go before the company’s debut.

Six years later, the Hong Kong branch of New Tang Dynasty Television (NTD), an independent Chinese-language station and member of the Epoch Media Group, is encouraging the Hong Kong government to bring the world’s premier classical Chinese dance company to the city in 2017.

The odds of Shen Yun being allowed to perform one step away from Mainland China have become somewhat promising.

Chinese leader Xi Jinping has been public about his love and reverence for traditional Chinese culture. Xi also appears to be distancing his administration from Jiang’s persecution of Falun Gong.

Xi has closed the labor camp system, where hundreds of thousands of practitioners were incarcerated at any time; he made what appear to be reconciliatory gestures on the anniversaries of key persecution dates; and investigators for his anti-corruption campaign recently criticized the 610 Office, an extralegal security force that oversees the persecution.

The ball is now in the Hong Kong government’s court.

Below is a translation of the letter that NTD sent to the Hong Kong government’s cultural department.

Founded in 2006 in New York, Shen Yun Performing Arts is a cultural miracle appearing on stages throughout the world.

Comprised mainly of elite Chinese-American artists, Shen Yun’s performances of dance and music have over the past decade become a global phenomenon. Each year, Shen Yun brings several hundred shows to the world’s top venues. The mostly sold-out performances are attended by Western audiences in North America, South America, Europe, and Oceania, as well as Asian audiences in Japan, South Korea, and Taiwan.

Shen Yun revives and celebrates China’s glorious 5,000-year-old culture and history. Around the world, Shen Yun receives high accolades from elites in the arts and culture community, and substantially raises the cultural recognition and confidence of Chinese people around the world.

Below are testimonies from high-profile individuals:

“I have come to this theater for over 45 years.” said David H. Koch, executive vice president of Koch Industries, after he saw Shen Yun Performing Arts in 2013 in the theater at Lincoln Center named for him. “I love the costumes, the athletic dancing, the combination of classical Western music with Chinese music. That’s very soothing, pleasing. And the athletic skill of the dancers is quite something. I love the backdrops, the beautiful painted scenes of China. … I certainly loved this tonight.”

Academy Award-winner Robert Zemeckis is a celebrated director, producer, and screenwriter. His list of film credits includes “Forrest Gump,” for which he won an Oscar for best director; the “Back to the Future” series; and the “Polar Express.” Of Shen Yun, he said: “It’s exciting and moving—moving in a compelling way. It makes you want to watch. … It’s very good, and the story lines are very interesting.”

The last king of Egypt and the Sudan, His Majesty King Fuad II, said of Shen Yun: “I congratulate the wonderful [performance] company I saw tonight, [with its] costumes, exceptional dancers, [and] the music. … I spent a wonderful evening and I thank them from my heart.”

International songwriter, composer, lyricist, and publisher Franceska Aeschlimann said of Shen Yun: “It is very touching to see such a giving—because they are giving so much—this is a lot of work to arrive to this point to do such a dance and to be able to present such a fantastic piece of art.”

Italian film actress Alessandra Sabet said of Shen Yun: “I could not imagine the perfection in dance, it is magnificent! I found it very, very beautiful.”

Shen Yun performances are always met with overwhelming acclaim and heartfelt praise from audiences from different countries around the world. They praise the authentic Chinese culture and arts showcased by Shen Yun, and express great admiration for traditional Chinese civilization. The achievements of Shen Yun highlight the profoundness and inclusiveness of Chinese civilization, as well as the depth of its history and culture.

In recent years, China has been gradually returning to the center stage of the world. However, restoring the Chinese people to the center of civilization will take a cultural renaissance. In this process, the power of art is an irreplaceable force. In fact, world history has demonstrated that the rise and prosperity of a nation is preceded by a rise in spirituality, often heralded by an artistic renaissance.

On one hand, this kind of innovation is one of the key elements of Shen Yun’s success. On the other hand, Shen Yun’s success is vivid proof that humanity shares a yearning for traditional Chinese virtues such as kindness, sincerity, and tolerance—virtues recognized by various countries and civilizations throughout history. As a matter of fact, Shen Yun performances in many major cities around the world win the hearts of people of all nationalities and create an unsurpassed theatrical experience.

As the starting point of the modern Silk Road, Hong Kong is a unique city which introduces China to the West. It is also the city’s responsibility to showcase Chinese civilization to the world. Situated at the junction of East and West, and North and South, Hong Kong should do more to promote Chinese culture and art, truly connecting China to the world, as well as presenting to the world these artistic masterpieces that combine the best of East and West.

The Hong Kong Leisure and Cultural Services Department has invited world-renowned performing arts companies to Hong Kong, such as Berliner Philharmoniker and other top orchestras, as well as the production of “La Traviata” by San Carlo Theatre, Naples, and the Wells Cathedral Choir. Their performances in Hong Kong were met with enthusiasm and critical acclaim.

We earnestly encourage the Hong Kong Leisure and Cultural Services Department to invite the world-renowned Shen Yun Performing Arts to perform in Hong Kong. Not only will it be an artistic phenomenon in Hong Kong, it will also facilitate China’s further integration into the world.