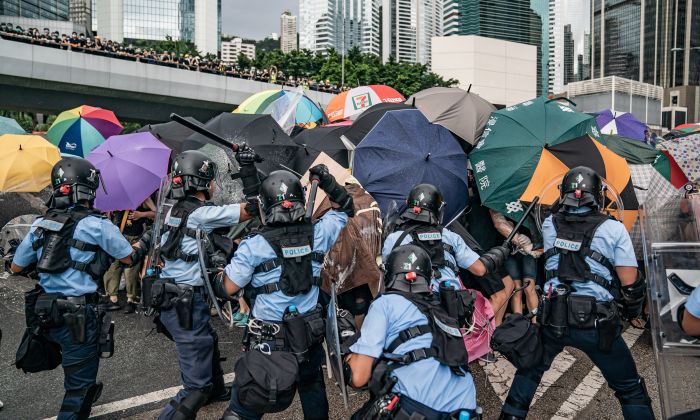 “In light of the widespread public concerns, the IPCC will proactively make a detailed study of the POEs [Public Order Events],” the IPCC said in a July 2 press release.

The study, to be completed within six months, will have a particular focus on the events of June 10, June 12, and July 1, when clashes occurred with police. It would be published at a later date, according to the release, though it did not specify when.

Protesters have previously expressed skepticism about the agency’s ability to conduct an impartial investigation, calling on the government to instead establish an independent committee to probe the police use of force.

Over the past few weeks, millions of people have taken to the city’s streets to protest a proposed extradition bill that would allow people to be transferred to mainland China for trial. Opponents say that given the Chinese regime’s disregard for rule of law, the proposals would enable Beijing to seek the extradition of its critics in Hong Kong with impunity.

In the early hours of June 10, swarms of protesters gathered outside the city’s Legislative Council (LegCo) building. The day before, roughly a million Hongkongers turned out for a march calling for the bill to be scrapped. In the evening, the government announced that it would proceed with the legislative process nonetheless. Clashes occurred after midnight when protesters tried to charge the building, with police using pepper spray and wielding batons to disperse crowds.

On June 12, tensions flared when police used rubber bullets, bean bags, and tear gas to disperse the largely unarmed crowds demanding the bill’s full withdrawal outside the LegCo. The police’s use of force caused 81 civilian injuries.

Public outcry against the police’s actions pressured the city’s leader Carrie Lam to announce on June 15 that the bill would be indefinitely suspended and all proceedings canceled. But many Hongkongers remained unsatisfied, demanding a full withdrawal and Lam’s resignation.

On July 1, protesters gathered outside the same building, using different implements to shatter the reinforced glass doors. Police engaged in a standoff with protesters throughout the day, but retreated when they broke through security gates and stormed into the building. Police later used tear gas near midnight to disperse remaining crowds outside.

The study aims to deal with public complaints received so far, and the “fact-find work” would allow “all stakeholders … to tell their side of the story,” according to IPCC.

According to the IPCC website, all police complaints are first forwarded to the police force’s internal complaints department, the Complaints Against Police Office (CAPO). The IPCC then reviews the results of CAPO’s investigations. The agency does not conduct its own investigations from scratch.

According to the latest records on the IPCC website, as of June 28, the agency has received 110 cases of public complaints against police actions during recent anti-extradition-bill protests. Eleven among the complaints filed accused police of “assault,” 28 of “unnecessary use of authority,” and 54 of “misconduct.”

After the police use of force on June 12, protesters have continually demanded that an independent inquiry be established to ensure a fair and comprehensive investigation.

The human rights group Amnesty International has issued an analysis of verified footage from the scene on June 12, calling the use of force “unlawful,” “unnecessary,” and “excessive.”

Groups such as the pan-democratic Civil Human Rights Front (CHRF) have said it is skeptical of the IPCC’s effectiveness, as the agency is “basically the police force investigating its own people … thus imposes zero deterrence on the police,” said CHRF convenor Jimmy Sham. Other critics have said they have no faith in the IPCC because it is made up of mostly pro-government or conservative figures.

However, city officials, including Lam, have objected to establishing an independent committee to investigate the incident, saying that the existing police complaints system would sufficiently address the public’s concerns.