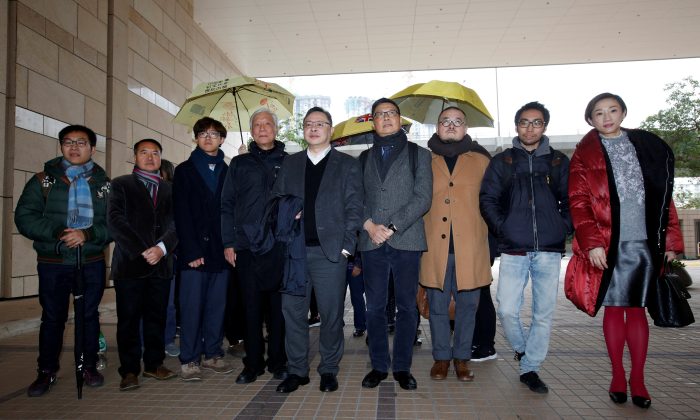 The nine leaders include law professor Benny Tai, 54, sociologist Chan Kin-man, 59, and Reverend Chu Yiu-ming, 74, who face three charges related to public nuisance, including conspiracy and incitement, during street protests which brought much of the former British colony’s Central business district to a halt.

This case could be the most consequential against the pro-democracy movement, with repercussions for hundreds of other protesters who were arrested in 2014 and are not sure if they will face trial. The nine defendants, who have all pleaded not guilty, face a maximum seven years in jail on each charge.

“We will be given an opportunity to retell the story [of the Occupy movement], hoping that people will see the real spirit and relate it to what’s really happening now, and think what they can do,” said Tai, a professor at the University of Hong Kong.

“We want to reboot the spirit of the people.”

Hong Kong returned to Chinese rule in 1997 under a “one country, two systems” formula, with the guarantee of a high degree of autonomy and freedoms denied citizens in mainland China, including freedom of speech and the right to protest.

Critics say, however, that the guarantee is ringing increasingly hollow, with perceived meddling by Chinese Communist Party rulers in the territory’s affairs.

The 2014 “Umbrella Movement” blocked major roads for 79 days in a push for full democracy, presenting Beijing with one of its biggest political challenges in decades.

The protest tents were eventually cleared away by police with no democratic concessions.

Since then, authorities have pursued more than 40 criminal cases against more than 100 protesters, including two dozen or so pro-democracy leaders. Critics say these moves have scuppered the momentum of Hong Kong’s youth-driven democracy movement, and substantially raised the stakes for future protests.

For the trial beginning on Nov. 19, the defendants said they had initially expected to face unauthorized assembly charges, but were charged with the graver offenses of conspiracy and public nuisance. One charge, “incitement to incite public nuisance,” has rarely been used before.

Hong Kong’s Solicitor General, Wesley Wong, said in a statement in July that the case was so large in terms of evidence and people involved that “substantial” time was needed to prepare for it.

He also said prosecutors would not be influenced by “political” considerations.

Last week, a senior Financial Times journalist, Victor Mallet, was barred from the city after he helped host an independence activist at the Foreign Correspondents’ Club, in what critics said was an attack on freedom of speech.

Hong Kong leader Carrie Lam has repeatedly stressed Hong Kong respects media and other freedoms, but has so far refused to give an explanation for Mallet’s de facto expulsion.

“The crackdown by the regime is more than I expected in that it’s so brazen, so shameless,” said Chan, who will take early retirement from the Chinese University of Hong Kong to avoid the risk of being fired should he be jailed.

“It’s a very frustrating, difficult moment for Hong Kong…they [the Hong Kong government] want to become another Singapore,” he added, referring to the city state’s tight grip on civil society and political discourse.

Some senior Western diplomats have privately expressed concerns that Hong Kong’s liberal latitude will continue to shrink, despite objections from the international and business communities.