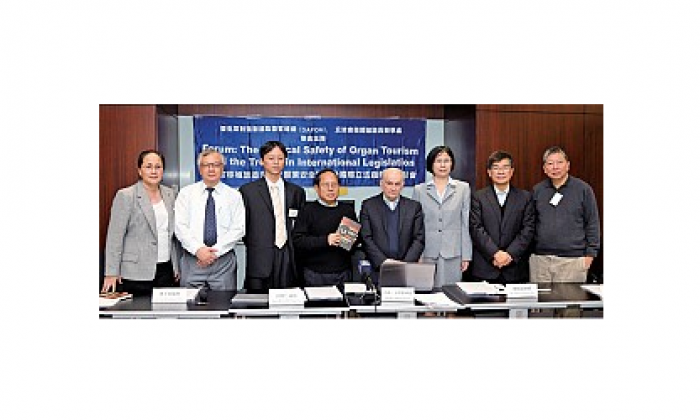 HONG KONG—Doctors, lawyers, and politicians gathered to discuss effective responses to the practice of forced, live organ harvesting in China at a forum in the Hong Kong Legislative Council (LegCo) building on Nov. 28.

The forum on “Medical Safety and the International Legislation Trend of Organ Tourism” was held by Doctors Against Forced Organ Harvesting (DAFOH), an international human rights group headquartered in Washington, D.C.

Canadian human rights lawyer and Nobel Peace Prize nominee Mr. David Matas flew into Hong Kong to speak at the forum. Members of LegCo and pan-democrats (pro-democracy politicians who agree not to field candidates against one another) also attended, and democratic LegCo members considered motioning for a restriction of live organ harvesting from Falun Gong practitioners.

Matas appealed to Hong Kong and Taiwan to join hands to stop the crime of forced organ harvesting from live Falun Gong practitioners and other prisoners of conscience.

Matas was nominated for the Nobel Peace Prize in 2010 for his unrelenting joint efforts with former Canadian Secretary of State (Asia-Pacific) David Kilgour in investigating, exposing, and attempting to stop the Chinese Communist Party’s (CCP) practice of organ harvesting. At the forum, he shared his years of investigation and analysis and supplied solid proof of the CCP’s crime.

He pointed out that in July 2005, then-Deputy Health Minister Huang Jiefu admitted for the first time that 95 percent of organ transplants in China came from executed prisoners. However, the use of the death penalty has decreased in recent years while the number of organ transplants remained the same.

According to Matas, this means that more organs are being taken from Falun Gong practitioners and other prisoners of conscience.

He added that the CCP’s organ harvesting is a global problem.

Matas arrived in Hong Kong after attending a similar event in Taiwan. He said that there are many common points between Taiwan and Hong Kong, which means they could play leading roles in stopping live organ harvesting.

Matas said that Hong Kong is in a unique position, partly because of its legislative power and partly because it holds the key to break the CCP’s cover-up for its organ harvesting crime—Hong Kong’s registration list of liver transplants.

Every hospital in China has to report cases of liver transplants to Hong Kong’s Queen Mary Hospital, he explained. This data was open to the public in the past, but when Matas and other researchers started to use it as references, the database was closed.

Matas asked LegCo member Albert Ho whether the Legco and its members could investigate the topic.

Appealing to the International Community

Lee Cheuk-yan, one of several pan-democrat LegCo members who attended the forum, appealed to the whole world to stop this inhuman crime of the CCP.

“They use cruel methods to harvest live organs to supply their business,” Lee said. “I think this is a very shameful act.”

DAFOH Asian legal consultant Theresa Zhu said that those who want to cover up the truth are the murderers and the accomplices. She appealed to everyone to spread the truth and expose the culprits.

Lee, who sat next to her at the forum, said they would consider it.

Another pan-democrat, Legco member Sin Chung-kai, was shocked to learn that the CCP army participated in organ harvesting.

“If it were not happening in the military hospitals, other organizations simply would not dare to do this,” Sin said, adding that international communities should work together to stem illegal organ transplants.

“Each country has to set up legislation to prohibit such activity,” Sin said. “Actually I think Hong Kong has to do some serious work in this respect.”

“We have conducted such a forum in a legislative institute to let others see that in this Council, some members are expressing their discontent for live organ harvesting, whether from criminals or death penalty prisoners.”

“This must be investigated to the end,” he added. “When you are not yet dead, the CCP will snatch your organs alive.”

Moderator and LegCo member Albert Ho said he learned from the seminar that 90 percent of illegal organ harvesting took place in mainland China, and it was organized and manipulated by officials. He condemned the crime as extremely cruel and inhuman and said that international communities need to exert further pressure to demand that the CCP disclose the truth.

“Such crimes are being done to many prisoners of conscience, including Falun Gong practitioners,” he said. “We hope that in the future there are more solid international agreements demanding that China increase absolute transparency.”

“They have to be absolutely transparent in the registration of the sources of organs,” Ho said.