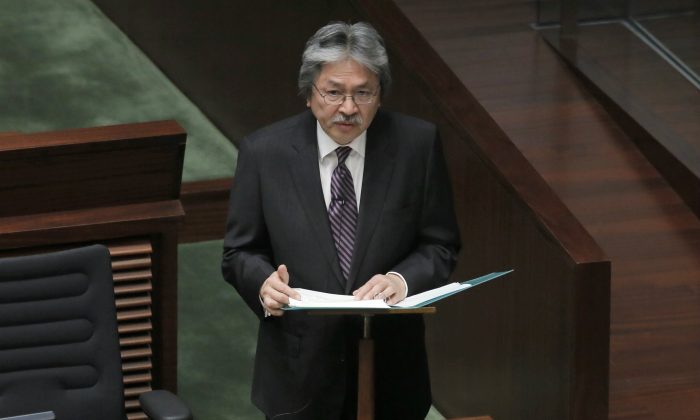 On the back of a substantial budget surplus, Hong Kong Finance Secretary John Tsang rolled out handouts and tax cuts for businesses and residents affected by street demonstrations last year in a bid to restore confidence in the city.

Students and pro-democracy supporters held key roads in Hong Kong for 11 weeks in what is known as the Occupy protests to reject a very restrictive political reform package imposed by Beijing. Hong Kong officials, Tsang included, repeatedly warned protesters that the prolonged seat-in would adversely affect the city’s economy.

On Wednesday, Tsang told legislators in his annual budget speech that city’s budget surplus is expected to hit HK$63.8 billion for the year ending Mar. 31, a sixfold increase over the predicted HK$9.1 billion.

The license fees of thousands of travel agencies, hotels, and restaurants would be waived for half a year, said Tsang. Vehicle exam fees for bus and taxi operators would also be waived once. About a third of the amount budgeted would be given to the tourism board for promotional activities.

While official figures from the Hong Kong Tourism Board in November show that hotels lost more than a thousand bookings since the start of the protests end September, the numbers for December were comparable with the previous year. Visitors to the city also increased year-on-year in the last three months of the year when the occupation was in full swing.

And in October and November, the height of the protests, retail sales actually went up from one year ago.

The Hong Kong police force, which came under fire during the Occupy protests for violent behavior and lacking discipline when dealing with protesters, journalists, and even the public, also got a sweetener, according to the Wall Street Journal.

The police, who aim to preserve “public order and safety during major security and crowd management events” in 2015, have received an extra HK$390 million. From this sum, the force will use HK$27 million to purchase three “specialized crowd management vehicles.”

Meanwhile, the public seems satisfied with the budget, according to a survey conducted by the University of Hong Kong. About 45 percent of 529 Hongkongers polled said they are happy with the budget, while 18 percent are against it.