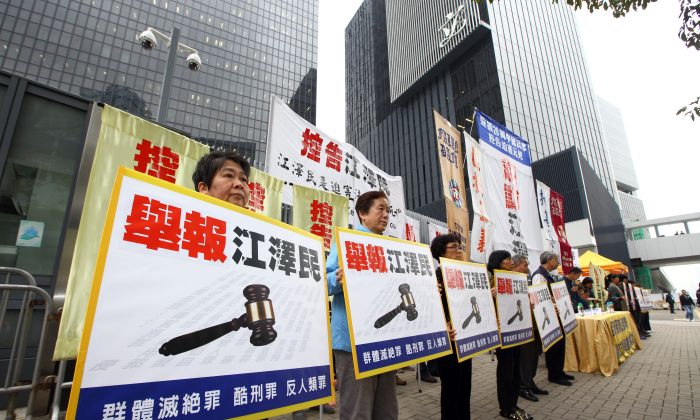 HONG KONG—Falun Gong practitioners held a rally in Hong Kong to support a campaign of lawsuits against former Chinese dictator Jiang Zemin, who started the persecution against Falun Gong in 1999.
The rally took place on Dec. 10, International Human Rights Day, which commemorates the proclamation of the Universal Declaration of Human Rights on Dec. 10, 1948.

On July 1 this year, civil groups in Taiwan and Hong Kong co-sponsored the activity of collecting signatures to support suing Jiang. Jiang, the former leader of the Chinese Communist Party (CCP), is being sued for launching and sustaining the now 16-year campaign of violence against the Falun Gong spiritual discipline.

Chu said the international community and the Chinese people have gradually come to understand the atrocities Jiang Zemin has committed against humanity.

She indicated that the joint report of more than one million people was exceptional in the history of human rights, both internationally and in China.

“For the first time there are one million people of different nationalities, races, and cultures expressing their appeals to the highest judicial institutes of China in the form of criminal reports against Jiang, asking to bring him to justice. This can be called the greatest accomplishment of the international community in defending universal values since the beginning of this century, which indicates that human rights have no borders.”

Since July, 50,128 signatures have been collected in Hong Kong to support the campaign to sue Jiang.
Chow Wai-tung, the coordinator of suing Jiang in Hong Kong, said that more than 50,000 upright Hong Kong people have expressed their demands to bring Jiang to justice as soon as possible.

“Among the 50,000-plus signatures, 38,514 have been sent to the Supreme People’s Procuratorate in different batches. Of these, more than 20,002 have received acknowledgement of receipt,” Chow said.
Hong Kong Falun Dafa Association spokesperson Kan Hung-cheung said the wave of suing Jiang has been showing a magnificent trend, and that it “continues to have global participation and support, asking to stop the persecution and to bring Jiang to justice.”

He said that bringing the persecutors to justice would not only stop the CCP’s persecution of good people, but also uphold social righteousness and revive the moral conscience of the country.
Several Falun Gong practitioners at the rally shared their experiences of filing complaints against Jiang. Some shared the touching stories of Hong Kong people who enthusiastically signed to support the campaign to sue Jiang.

Several members of the Legislative Council of Hong Kong (LegCo) attended the rally and showed their support for the lawsuits.

He criticized the CCP’s inhuman suppression of Falun Gong. “Live organ harvesting is one of the crimes against humanity that absolutely cannot be accepted at all,” he said.

LegCo member Wu Chi-wai said, “The fact that so many mainland people have participated in the reports against Jiang reflects the seriousness of the crime committed by Jiang. It also indicates the commendable courage of the public in the course of pursuit of justice.”

“No matter what type of autocracy, you cannot stop people’s efforts to pursue righteousness and justice. This will encourage more mainland people to step forward,” Wu said.

LegCo member Leung Yiu-chung said one million signatures is a very large number, and it takes courage to bring accusations against the CCP’s former leader. Leung said the CCP has been using high-pressure methods on people, especially religious suppression.

Leung said that so many mainland Chinese people have come forward to sue with a spirit of sacrifice; it is a good inspiration to others.