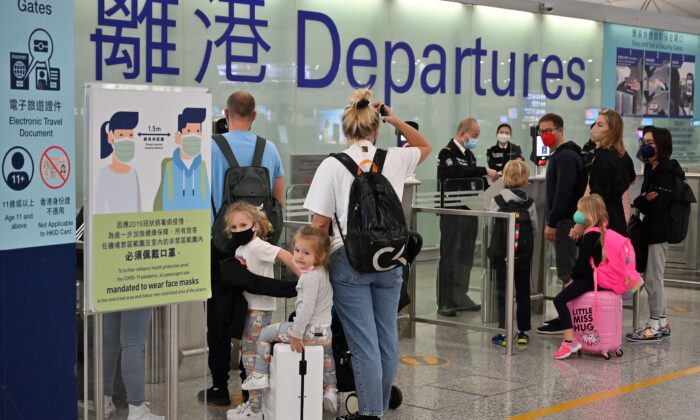 With the implementation of the National Security Law and two-year-long harsh anti-COVID measures, more and more expatriates working in Hong Kong say they are considering leaving the city.

Some are planning to leave permanently, said Ms. Lee, who works for a foreign company in Hong Kong, “Many of them are looking for jobs outside Hong Kong.”

“They told me, ‘it is so good to leave Hong Kong’ when speaking of their latest holiday abroad.” Ms. Lee said most countries have opened up and now coexist with the COVID-19 virus, and people have resumed a free and easy life.

But Hong Kong is still trapped in various isolation restrictions as a result of its adherence to Beijing’s zero-COVID policy.

InterNations, the largest global expat community, recently released a survey listing the world’s 52 most livable cities for expats in 2022. Hong Kong was among the bottom three along with New Zealand and Kuwait, while the top three most livable destinations were Mexico, Indonesia, and Taiwan.

Survey results showed that expatriates living in Hong Kong are not satisfied with personal finances, living costs, and the urban environment.

As for the overseas work destination index, Hong Kong was ranked in the bottom 10, or 41st. Among respondents’ feedback, 68 percent are dissatisfied with the general cost of living, 46 percent feel there is a lack of creativity in local business culture, 56 percent of expats feel they cannot express their opinions openly, and 33 percent are dissatisfied with the urban environment.

“My foreign colleagues’ move makes me aware that Hong Kong is losing its charm for foreigners and getting to be less international, not to mention maintaining its status as a financial center,” Ms. Lee said.

In another ranking of the world’s best cities, Hong Kong fell to 52nd from 20th place last year, lagging behind other Asian cities such as Mumbai, Taipei, and Bangkok.

The public polling, organized by Time Out, a London-based global magazine, collects 20,000 city-dwellers opinions around the world, ranging from entertainment, food, arts, and cultural activities to green living, transportation, and community spirit.

GEP is a Hong Kong recruitment policy that enables local employers to recruit professionals that are not available in Hong Kong to meet their manpower needs.

A May survey conducted by the American Chamber of Commerce in Hong Kong showed that 42 percent of the expatriates surveyed were considering or planning to leave Hong Kong, with more than 49 percent of the respondents citing stringent epidemic prevention measures as one of the reasons for their departure.

Among those who chose to leave, 62 percent said the main reason for leaving Hong Kong was that the implementation of the National Security Law (NSL) made them feel uneasy. More than 36 percent were worried that law enforcement would impact the quality of their children’s education.

One expat wrote in the questionnaire, “Previously, I never had a worry about what I said or wrote when I was in Hong Kong. With the NSL, that has changed. The red lines are vague and seem to be arbitrary. I don’t want to continue to fear saying or writing something that could unknowingly cause me to be arrested.”

Another expat shared a similar opinion, “I think the tolerance towards non-ethnic Chinese and Caucasians in particular, which was a hallmark of post-colonial Hong Kong, is waning. As to the NSL, it’s not just that, but also the rise of illiberal values as Hong Kong becomes more closely integrated into China.”

One respondent said that most of his social circle of friends had left Hong Kong.

Most of the respondents had lived in Hong Kong for a long time, some for as long as 17 years, the survey showed.