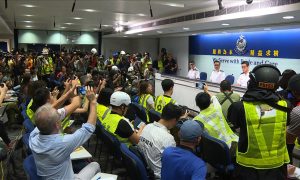 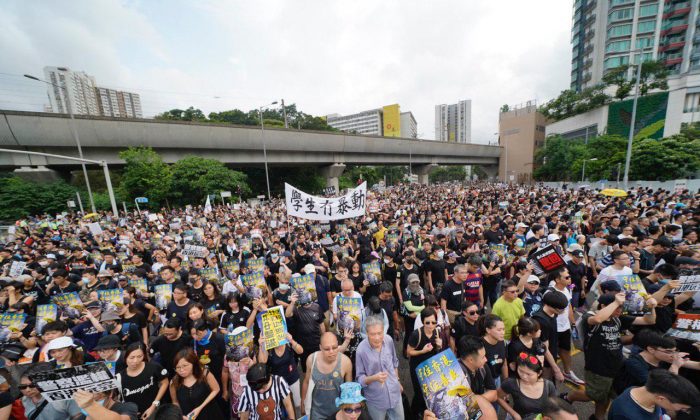 Tens of thousands of people rallied against a proposed extradition bill on July 14 in a Hong Kong town bordering mainland China, before clashes between protesters and riot police broke out in a popular shopping mall following an hours-long standoff.

In the sweltering heat of about 90 degrees Fahrenheit, tens of thousands of Hongkongers spilled into the streets of Sha Tin, a northern town that borders the mainland and is popular with Chinese shoppers, to oppose the legislation, which would allow people to be transferred to mainland China for trial by courts controlled by the Communist Party.

Millions of people have joined demonstrations in Hong Kong over the past month to protest the proposal, which critics say will further tighten Beijing’s grip over the city, eroding its autonomy.

Organizers of the march in Sha Tin said 115,000 took part in the protest, while police estimated 28,000 at the rally’s peak.

While embattled city leader Carrie Lam has suspended the bill, and on July 9 described it as effectively “dead,” demonstrators have continued to insist upon its full withdrawal. Rallies have recently spread from the city’s downtown area to the suburbs, amid growing public anger over the government’s handling of the bill.

Protesters of the Sha Tin march carried banners that read: “Retract the vicious bill,” “Students aren’t rioters,” “Against police brutality,” and “You [the government] might forever refuse to listen, but we will forever make our voices be heard.”

Among the participants was award-winning local singer and actress Deanie Ip, who told the Hong Kong bureau of The Epoch Times that she was “tremendously saddened” after seeing the police’s use of excessive force against protesters over the past few weeks.

Ip further condemned the city government for refusing to listen to the public’s peaceful demands: “This ruling body is rotten. They follow the chief executive [Lam] without daring to say a word against it, even when they know it’s something harmful to our Hong Kong.”

At around 5 p.m., scuffles broke out at an intersection near the endpoint of the parade, as protesters threw objects including traffic cones and umbrellas at police, who struck back with pepper spray. About 50 riot police carrying shields formed a line, leading to a stand-off against protesters in helmets and carrying umbrellas.

The stand-off continued through 8 p.m., as hundreds of protesters set up barricades using umbrellas, cardboard, and railings removed from elsewhere, while police in full riot gear pushed forward, using a loudspeaker to warn the crowd to leave immediately or face arrest.

As police closed in, protesters started dispersing and many retreated into New Town Plaza, the most popular shopping mall in the area, where clashes then broke out.

Protesters hurled objects including umbrellas, helmets, and bottles at charging police. Meanwhile, officers in riot gear charged up escalators to the various floors of the mall, wielding batons and shields and using pepper spray, as a running battle ensued with the hundreds of protesters inside the mall.

Inside the mall, some protesters were injured and had to be treated by medics, while several were subdued by police and detained.

At least 40 people were arrested from the night’s clash, Hong Kong Police Commissioner Stephen Lo confirmed on the night of July 14, adding that at least 10 police officers were injured and were taken to the hospital.

Lo also called protesters from the clash “rioters,” and said police would “pursue them to the end.”

Several pro-democracy lawmakers criticized the police for abusing power by storming into the mall in full riot gear and chasing protesters, saying such violence had caused panic among shoppers.

The clash happened a day after scuffles broke out between protesters and police following a largely peaceful rally on July 13 in Sheung Shui, another border town with mainland China.

The July 13 protest, which according to organizers attracted more than 30,000 people, while focused around the extradition bill, included community concerns to widen support among locals.

Protesters also voiced opposition to parallel traders from the mainland, who swarm the border town to bulk buy products such as skincare goods and baby formula, to be resold in the mainland, causing price increases and shortages for local residents.

Organizers said at least 1,500 attended the rally, which went from Admiralty to police headquarters in Wan Chai. The police estimated 1,100 in attendance at that rally’s peak.

Dozens of media workers claim to have been assaulted or harassed by police officers while covering recent protests, including being verbally insulted, pushed away with shields, and beaten with batons.

The Hong Kong Journalists Association has received 29 such complaints from journalists and filed 27 of them with the Independent Police Complaints Council (IPCC), the city’s police watchdog.

“Time and again, journalists have been struggling to keep themselves safe. The irony is that the major source of the threat came from the law-enforcing police officers on the spot. How can the media fully serve the role of the fourth estate, especially in monitoring the exercise of public powers?” the protesters read in a joint statement outside of the Office of the Chief Executive.

In addition, Civil Human Rights Front (CHRF), the organizer behind recent mass protests that were joined by millions, is planning another rally on July 21 in Admiralty to demand the full withdrawal of the extradition bill, among its other demands.

The Hong Kong bureau of the Epoch Times contributed to this report.