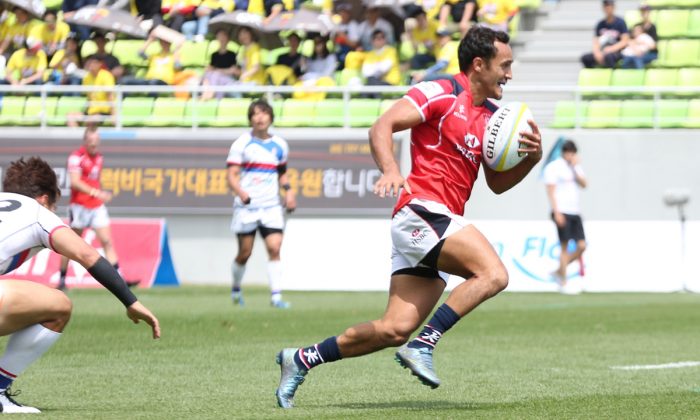 Ben Rimene collects his chip and chase to score the game-winner for Hong Kong in their Asia Rugby Championship match against South Korea on Saturday May 14. (Kenji Demura/RJP)
HK Rugby Union

Hong Kong beat South Korea 34-27 at Incheon on Saturday May 14, with a try in the 77th  minute by Hong Kong fly-half  Ben Rimene, and move to second place in the 2016 Asian Rugby Championship, behind Japan but ahead of Korea.

It was a close contest, decided by three key features of the match: firstly, Rimene’s enterprise in the final minutes; secondly, Hong Kong capitalizing on the sin-binning of Korean centre Kim Jyeon-Hyeok in the second-half, scoring 14 valuable points during the 10 minutes with a man advantage; and thirdly, better overall game management.

Hong Kong began brightly with a try by Alex McQueen after 5 minutes, completing a break by winger Ryan Meacheam, converted by Rimene, giving Hong Kong a 7-0 lead. South Korea replied immediately turning over Hong Kong ball, and full-back Lee Jae-Bok crossed to score. The conversion was unsuccessful, and the score 7-5.

Rimene later added two more penalties from Hong Kong pressure to extend the lead to 13-5. Again, Korea bounced back, pressuring Hong Kong in the set piece with their powerful forwards, and rewarded in the 38th minute when centre Kin Sung-Soo crossed for a try close to the posts, converted by winger Lee Soop-Yeong. The half-time score was 13-12 to Hong Kong, but the match momentum was swinging in favour of Korea.

The Korean pressure, especially their pack, continued at the outset of the second-half, and Korea eventually edged ahead 15-13, with a penalty.

Then came a decisive moment in the match. McQueen was taken in the air by Korean centre Kim Jyeon-Hyeok; his 10 minute sin-binning would prove costly. Hong Kong took full advantage of the extra man. They scored two tries during this period. The first by McQueen, the second by scrum-half Jamie Hood, both converted by Rimene. Hong Kong regained the lead and looked solid at 27-15 with 15 minutes to play.

Korea, back to full-strength, fought back, spurred on by the home crowd. Full-back, Lee Jae-Bok scored his second try, converted by Lee Soop-Yeong, narrowing the score to 27-22; then hooker Na Kwan-Young powered through the Hong Kong defence to level the score at 27-27, but the conversion was missed.

It set-up a tense finish: with Korea in the ascendant and Hong Kong hanging-on. But it was Hong Kong that provided the match-winning magic needed to unlock the game and separate victor from vanquished. A savvy chip-and-chase by Rimene, led to a fine individual try and conversion; it gave Hong Kong the lead and victory, 34-27. And Korea was left to ponder, what might have been.

It was a good victory for Hong Kong. They played a controlled game, absorbed the Korean pressure and were sharp enough to exploit the man advantage in the second half. In Rimene Hong Kong has a match-winning fly-half with a metronomic boot and good rugby brain. For Korea, it was a match poised to go either way, and their lack of discipline and game-management cost them victory. Hong Kong and Korea clearly demonstrate an abundance of rugby talent in Asia beyond Japan.

Next week Korea play Japan in Incheon (May 21), then Japan play in Hong Kong in Tokyo (May 28), and the final match, in Hong Kong, when Hong Kong play Korea (June 4).