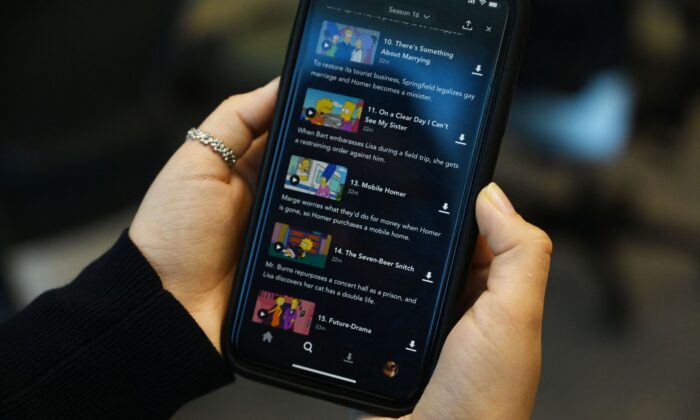 A mobile phone displaying the Disney+ streaming service in Hong Kong shows a list of episodes of popular US cartoon series "The Simpsons" in this photo illustration taken on Nov. 29, 2021. (Peter Parks/AFP via Getty Images)
Hong Kong

An episode of “The Simpsons” that criticizes Chinese Communist Party (CCP) censorship appears to have been removed from Disney’s newly launched streaming channel in Hong Kong.

Disney+, which rolled out in Hong Kong this month, features all episodes of the show apart from season 16, episode 12, which was first broadcast in 2005 and makes reference to the CCP’s 1989 Tiananmen Square massacre.

The events of June 3 and 4, 1989 saw potentially hundreds or even thousands of innocent lives lost after the CCP ordered its troops to open fire on pro-democracy activists at Tiananmen Square in Beijing.

Fans of the show quickly noticed that Disney+ skips from episode 11 to 13, missing out the episode titled “Goo Goo Gai Pan,” which features a joke placard inside Tiananmen Square stating “on this site, in 1989, nothing happened.”

Confirmed this second by a friend in Hong Kong.

S16E12 of The Simpsons is removed from Disney+ in Hong Kong. pic.twitter.com/9QIp2vcOCD

According to Hong Kong Free Press, viewers are able to access the episode when they enable VPN circumvention tools.

The Hong Kong Office of the Communications Authority declined to comment on the matter,  and Disney hasn’t yet responded to The Epoch Times’ request for comment.

It comes amid escalating concerns about censorship in Hong Kong. In June 2020, Beijing imposed its sweeping national security law, which stipulates that offenders, if convicted, could be imprisoned for life. The law gives Beijing sweeping power to target individuals for any acts of secession, subversion, terrorism, and collusion with foreign forces.

On Sept. 15, nine Hong Kong pro-democracy activists were handed jail sentences ranging from six to 10 after pleading guilty to participating in a candlelight vigil in 2020 to commemorate the Tiananmen Square massacre.

Another three people received suspended sentences for the same charge of having participated in the unauthorized assembly in the city’s Victoria Park on June 4, 2020.

The normally annual event was banned in 2020 and 2021 by Hong Kong police, who cited concerns about the spread of the CCP virus, however, thousands of Hongkongers defied the ban last year to gather for the vigil.

Hong Kong’s candlelight vigil has been organized annually since 1990 by the Hong Kong Alliance in Support of Patriotic Democratic Movements of China. It is renowned for being the only large-scale public gathering on Chinese soil to commemorate the Tiananmen Square massacre, and it’s traditionally the largest vigil of its kind in the world.

More recently, in October, the University of Hong Kong (HKU)—the oldest public university in Hong Kong—ordered the removal of a statue from its campus that commemorates the victims of the 1989 Tiananmen Square massacre.