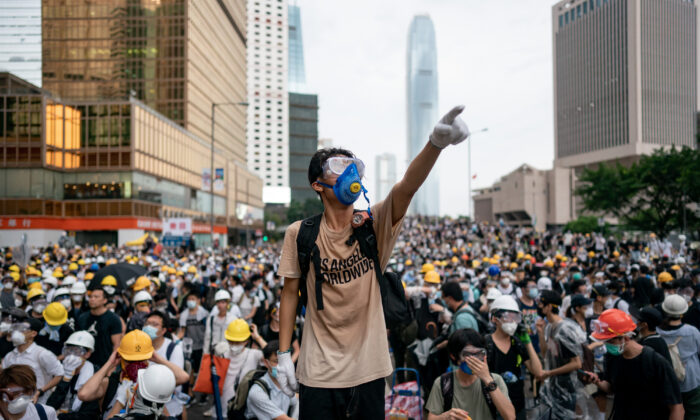 A protester makes a gesture during a protest in Hong Kong, China, on June 12, 2019. Large crowds of protesters gathered in central Hong Kong as the city braced for another mass rally in a show of strength against the government over a divisive plan to allow extraditions to China. (Anthony Kwan/Getty Images)
Thinking About China

These Hong Kongers were the real social justice warriors fighting for something genuine—democracy and freedom—with their lives and futures on the line. They made our homegrown crew seem childish revolutionary wannabes, junior varsity Quixotes tilting at windmills that were non-existent until they invented them.

Steve Yates—the leader of our delegation, a former Deputy National Security Advisor and a longtime Taiwan hand—clearly agreed, telling the Hong Kong “youngsters,” as they called themselves, how much American youth had to learn from them about what were supposedly our values. (The Hong Kongers are well aware of people like Jefferson and Franklin and what they stood for.)

Our small U.S. media contingent, in Taiwan to observe its upcoming presidential election on Jan. 11, was sitting in a conference room in a Taipei Presbyterian church that itself had been associated with the battle for democratic government on Taiwan decades ago, a struggle whose success was underscored by the electoral enthusiasm we were witnessing on the island. (A rally for KMT party presidential candidate Han had an estimated 350,000 people in the streets of Taipei that night. I can’t speak for the accuracy of the number but I was there as it was beginning and there were lot of people.)

The Hong Kong demonstrators were quite open with us, although reluctant to be photographed for obvious reasons. They are tracked continually and contact with Americans would not be helpful to them. I will not identify them by name here.

Young men and women, they came from different sectors of their freedom movement. They also had the look and feel of young people in Europe and the United States. They would have fit in easily having coffee at a Left Bank cafe in the midst of an earnest discussion of art and politics. (Everyone knows everything in this interconnected world—that is, if they want to learn.)

A few were recently elected as district councillors for Hong Kong’s eighteen council districts. To the astonishment and obvious concern of Beijing, eighty percent of the winners in the recent council elections came from the democracy movement. Legislative elections are coming soon.

So these demonstrators were newbie politicians, anxious, as they explained to us, to prove that what the Maoists called the “capitalist road” could be more successful in providing services for their constituents who were described as “pragmatic” and from all social classes.

It’s a balancing act with the question being, what next? Yes, the demonstrations continue, but where will they go ultimately? Can a crackdown be prevented? How can the idealism of the democracy movement be preserved? And what, finally, is the goal?

A couple of the demonstrators in attendance were slightly more extreme than the others. They favored independence for Hong Kong, a more idealistic approach that seemed out of reach to the others, even if they agreed with the intention.

These two were also—let me try to be precise here—more open to taking things at least to the edge of violence, the goal being to expose the communists for what they are.

These were the kind of splits we have seen in revolutionary movements from time immemorial. But this group didn’t seem to be at loggerheads with each other in the slightest. There was a warm camaraderie. You couldn’t help but be awed by them. And to want to help.

Roger L. Simon is a senior political analyst for The Epoch Times. His recent novel is “The GOAT.”