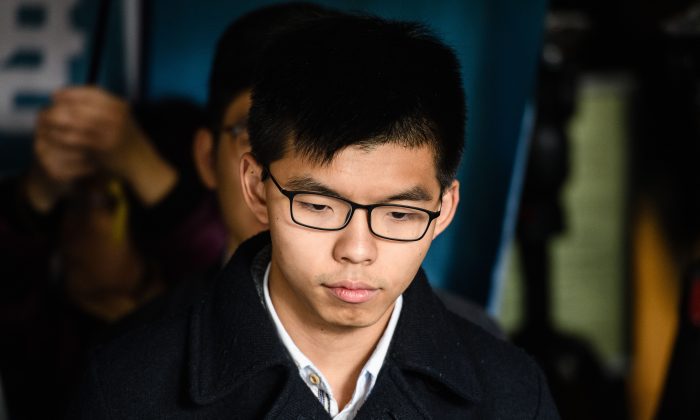 HONG KONG—Hong Kong democracy activist Joshua Wong, 21, was sentenced to a second jail term of three months on Wednesday for what a judge described as his “leading” role during some of the 2014 pro-democracy “Umbrella Movement” street demonstrations.

Wong and 19 other demonstrators were found guilty of criminal contempt of court because they refused to obey a court injunction order to leave a protest zone in late November 2014.

The protest was part of the biggest populist uprising for decades in Hong Kong and posed a spirited challenge to Beijing’s Communist Party leaders in demanding full democracy.

For more than two months, tens of thousands of mostly student and young demonstrators camped out in tents on major highways, defying government, police and Chinese demands to leave. Umbrellas became a symbol of defiance after protesters used them as shields against police pepper spray and batons.

High Court Judge Andrew Chan said that even though Wong only stayed in the protest area for 90 minutes on the day in question, “his involvement in obstructing the clearance operation was deep and extensive. He played a leading role on that day”.

“In view of his overall involvement, I am of the view that the only appropriate punishment … will be one of immediate imprisonment,” said Chan.

“Thank you your honor for your ruling. Our determination to fight for genuine universal suffrage will not waver,” stated Raphael Wong in the courtroom before being taken away.

Lawyers for both the Wongs said they would appeal, but they were denied an immediate request for bail.

Hong Kong, a former British colony, returned to Chinese rule in 1997 amid promises that the Asian financial hub would enjoy a high degree of autonomy under a so-called ‘one country, two systems’ arrangement.

A perceived tightening of control by Beijing’s Communist Party leaders in recent years, however, has fueled a groundswell of pro-democracy activism aimed at defending the city’s constitutionally enshrined freedoms.

While a spirited young generation has given Hong Kong’s flagging push for democracy fresh impetus, some 100 key activists have, or could be, jailed in upcoming trials, in what critics say is an attempt to counter the movement’s momentum.

Upon learning about the sentence from his lawyers shortly before the court hearing started, Joshua Wong looked up from behind the dock, squeezed his eyes shut and sighed. Wong chose not to fight the charge in the spirit of civil disobedience.

Wong had begun serving a six-months imprisonment sentence last August for a separate unlawful assembly charge, but he was granted bail by Hong Kong’s highest court, which heard the appeal against the sentence on Tuesday. It would decide upon the case on a later date.