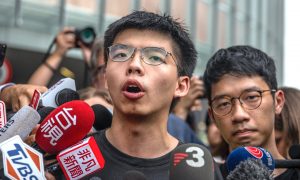 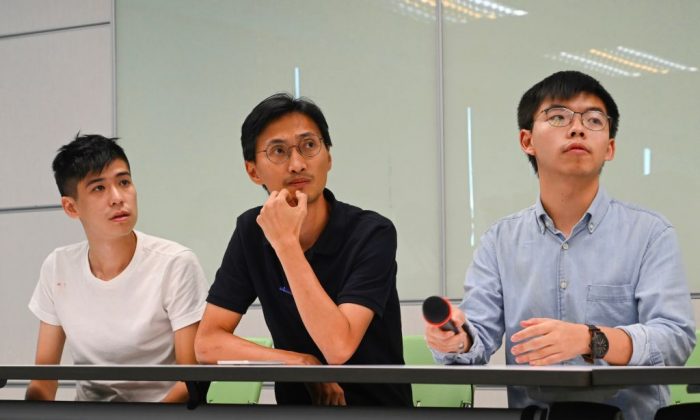 Hong Kong Democracy Activists Appeal to US, Taiwan for Support

Several prominent Hong Kong democracy activists have turned to the United States and Taiwan to seek international support for the ongoing protests in their hometown.

The bill, which was introduced in both the House and Senate in June, proposes making Hong Kong’s special trading status contingent on the issuance of an annual certification of Hong Kong’s autonomy by the U.S. secretary of state.

Currently, the United States views Hong Kong as a separate entity from mainland China in matters of trade, commerce, and investments—owing to the high degree of autonomy granted to the city after it was transferred to Chinese rule from the UK in 1997. The Chinese regime promised that under the “one country, two systems” model, Hong Kong would retain its freedoms. But many locals have complained about the encroaching influence of Beijing since the handover.

“Given the deteriorating situation in Hong Kong, and the worrying developments in the abuse and restriction of human rights, and the continued suppression of democratic developments in Hong Kong, we sincerely implore your good selves and your colleagues for the swift passage of the bill into law as soon as possible,” the letter stated.

Congress is due to be back in session on Sept. 9.

All aforementioned lawmakers have made public statements in support of the Hong Kong protesters. In early August, Pelosi released a statement saying she was committed to working with her colleagues to pass the bill.

The protesters are hoping the bill will apply economic pressure to the Hong Kong government.

The pro-democracy lawmakers argue that the bill “will help safeguard the common values that we all share and uphold, including freedom, rule of law, and democracy,” according to the letter.

Protesters fear that a proposed extradition bill would endanger the city’s autonomy. The bill would allow the Chinese regime to transfer individuals to be trialed in courts controlled by the Chinese Communist Party (CCP)—notorious for an opaque judicial system that silences critics and punishes dissidents. The bill was suspended following widespread public opposition.

Protesters are demanding that the city government headed by Chief Executive Carrie Lam fully withdraw the bill, as well as establish an independent commission to investigate instances of police violence against protesters; and enact reforms that allow for direct, free elections.

Speaking to press in Taipei, Wong said that Hong Kong and Taiwan both face “the same suppression from Beijing,” and that what’s happening in Hong Kong could one day happen to Taiwan.

Taiwan is a de-facto independent country with its own constitution, military, elected officials, and currency, but Beijing considers it a renegade province that will one day be united with the mainland, by military force if necessary.

In January, Chinese leader Xi Jinping suggested that the “one country, two systems” model could be used to bring Taiwan under the reign of Beijing, a suggestion that angered many in Taiwan. Thousands staged a protest in April opposing such a suggestion.

Wong urged Taiwanese people to take to the streets to demonstrate their support for Hong Kong protesters before Oct. 1, when the CCP celebrates the anniversary of its takeover of China.

He added that Hong Kong police have already arrested more than 1,100 people since the start of mass protests in June.

Taiwan has become a top destination for a number of Hong Kong activists seeking refuge, according to Wong. He said he hoped that the Taiwanese government would take measures to ensure their safety.

Radio Free Asia reported on July 18 that more than 10 Hongkongers were seeking asylum in Taiwan. All of them had taken part in storming the Hong Kong Legislative Council building on July 1.

Taiwan President Tsai Ing-wen took to her Facebook page following a security council meeting about the Hong Kong situation on Sept. 3. She wrote that she has instructed the relevant central government agencies including the Ministry of Education to assist Hong Kong students currently studying in Taiwan.

She added that the Taiwanese government would help Hongkongers on humanitarian grounds.

Wong explained that it was also important for Taiwanese politicians to voice their concerns about the Hong Kong government’s recent actions, including possibly declaring a state of emergency to quell the ongoing protests.

Lam hasn’t dismissed the use of the Emergency Regulations Ordinance, which would grant the Hong Kong leader sweeping powers to make arrests, stop communications, and issue punishment during “occasions of emergency or public danger.”