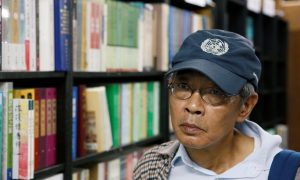 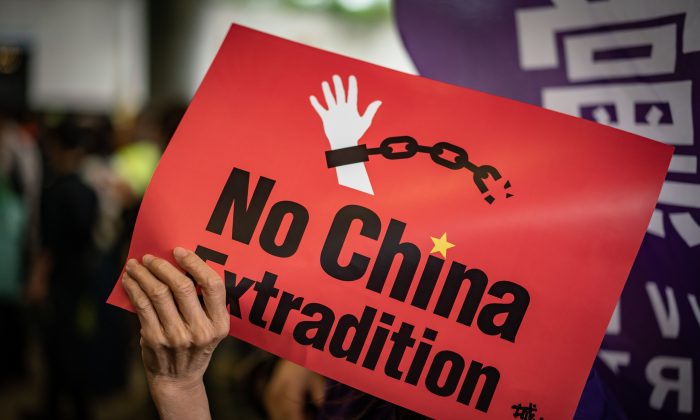 A protester holds a placard during a rally against the extradition law outside the Legislative Council building in Hong Kong, China, on May 4, 2019. (Anthony Kwan/Getty Images)
Canada

OTTAWA—A potential threat to the more than 300,000 Canadians in Hong Kong could become reality unless proposed extradition legislation is defeated. Time is short and a delegation led by Hong Kong’s “father of democracy” Martin Lee is visiting Canada and the United States to try to stop another of Beijing’s attempts to undermine Hong Kong’s autonomy.

At an event hosted by the Macdonald-Laurier Institute think tank on May 7, Lee said China has broken its promises to Hong Kong, whose chief executive Carrie Lam is also effectively shutting down the democracy movement. Lee, a lawyer and founder of the Hong Kong Democratic Party, helped draft Hong Kong’s Basic Law—a mini-constitution.

“We don’t recognize the courts of China,” Lee said. He had to work with Chinese lawyers while drafting the Basic Law and said they’ve acknowledged that their rule of law was not up to Hong Kong’s standards. Those standards are supposed to be based on the British-style legal system until 2047.

Given the abject reputation of China’s legal system, the proposed law would violate the rights to a fair trial for people in Hong Kong who were extradited. Such rights were guaranteed when the city was handed over from British colonial rule to China in 1997.

Hong Kong’s proposed extradition amendment was first announced in February. With support from the Beijing-friendly Lam, China could seek extraditions on a case-by-case basis. China has the death penalty, but Hong Kong does not.

Over 100,000 people in Hong Kong have protested in the streets against the proposed law. Ten Canadian and American organizations relayed deep concerns about the extradition proposal on April 6.

Lee has previously detailed how former Chinese leader Deng Xiaoping wanted to practise capitalism and wished for Hong Kong to guide China forward. Instead, China’s subsequent leaders haven’t followed through and have gradually whittled away at Hong Kong’s freedoms.

Since the December arrest of Huawei executive Meng Wanzhou, which infuriated China, Canada has come to know that Chinese politics gets involved in legal matters and that Beijing will also retaliate with economic pressure in hopes of achieving its goals. China has already detained two Canadians on trumped-up charges, sentenced two other Canadians to death, and restricted trade on canola and pork.

According to an email, Global Affairs Canada has “raised serious questions with the Hong Kong government” over the proposed extradition amendment and is closely monitoring any possible legal changes.

The urgency is palatable, as Gloria Fung, president of the Canada-Hong Kong Link, suggested that the proposed amendment could be passed in as little as a month’s time.

It is a threat to the business sector in the financial hub that is Hong Kong. Fung says Canadian businesses in Hong Kong could be playing a very risky game given that bribery is often involved. That could become a convenient way for business people to be extradited to China if they are ever targeted by business partners or government officials in China.

“I think it’s about time for our business sector to respond strongly to oppose this proposed amendment,” she said in an interview.

Labour leader and former legislator Lee Cheuk Yan says the new amendment could be used by the Chinese for extortion and blackmail against business people in Hong Kong.

There’s a lesson in all of this for Taiwan as well, he said. The “one country, two systems” Hong Kong model as an incentive for Taiwan has been destroyed, says Yan.

“Our fight is also for the Taiwanese,” he added.

Hong Kong youth democracy leader Nathan Law points to the potential silencing of academia. Hong Kong scholars research threats to the democratic system and ways to blunt infiltration via China’s influence-building schemes; they would be in grave danger as prime targets for extradition, he says.

“Hong Kong has always had a firewall—between China and Hong Kong—the authoritarian world and the liberal world,” he said. “You can see how they have retaliated against Canadian citizens after the Huawei incident.”

Lee reiterates that the decision on the extradition amendment resides with the Hong Kong government and that Canada’s diplomatic channels have to speak up.

“Why don’t you get your consulate general in Hong Kong to ask our chief executive Ms. Carrie Lam, ‘What the hell are you doing?’” he said.

Future democracy activists could face trials in communist China. Nine from the 2014 Occupy movement have already been sentenced. These are not the types of actions envisioned when Hong Kong was handed over in 1997.

“She [Lam] said recently trying to move democracy forward is like knocking your head against a wall. To me, even if she is right, she should just knock her head against the wall and get it done,” Lee said in a separate interview.

“I believe she is deliberately helping Beijing destroy Hong Kong as an international city,” he added. “I think Beijing wants Shanghai to take over. That’s my view.”

The analogy Lee gives is that Hong Kong is like a welcoming oasis in the desert that is China. He points to Chinese communist officials moving family and money out of China and ponders how long the communist regime can last.

“We call them ‘naked officials.’ Where can you find another government like this? They don’t believe in their own government.”

Lee is confident freedom and democracy will come to China, but the imminent danger is Beijing’s growing influence over Hong Kong.

“The only right thing to do is to ask China to honour the obligations to Hong Kong before there is reason for you to enter into more treaties with China,” Lee said. China backtracking on the arrangement with the British government and Hong Kong is yet another example of it disrespecting mutual agreements, such as those under the World Trade Organization.

“There is, of course, at least a moral obligation on the part of the Canadian government to speak up,” Lee said.