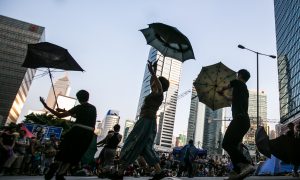 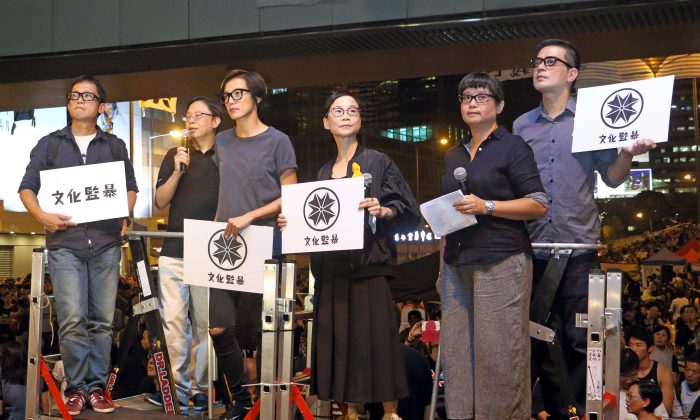 They decided to form the group on Oct. 9, after Hong Kong’s chief secretary for administration Carrie Lam abruptly cancelled the talks with protesters scheduled for Oct. 10, blaming the student leaders for undermining the talks.

Following the cancellation of the talks, tens of thousands of pro-democracy protesters gathered at the Pacific Place in Hong Kong on Oct. 10, calling for Leung to step down.

The leaders of Hong Kong Shield participated in that protest and Mr. Shu Kei read a statement on behalf of the new group condemning the government’s refusal to meet with the protesters and use of violence.

“The government canceled the talks scheduled today with a ridiculous reason. The glimmer of hope to solve current predicament is destroyed again under the government’s evasive attitude,” Shu said.

“We are with you all until we reach the goal of genuine universal suffrage,” Shu said. Excited demonstrators gave the speech warm applause.

Award-winning Hong Kong film director Adam Wong said during the rally, “We have lots of true hearts to support you to seek democracy—such a simple truth.”

Wong said he was very disappointed when he watched police fire tear gas at protesters on the evening of Sept. 28 through an Internet feed.

The tear gas didn’t scare the protesters away, but drew more and more citizens to participate in the movement, giving great inspiration and hope, Wong said.

“I saw hope. I don’t know how the movement is going to develop,” Wong said. “But I believe that our hearts are not dead.”

Many protesters have set up tents to camp overnight for long-term demonstrations in business districts of Hong Kong, including Admiralty, Mong Kok, and Causeway Bay.

Demonstrators even set up tables as a “study corner” so that students who came to participate in the gatherings after school can do their homework. The protesters in Hong Kong have kept activities organized and streets clean.

With additional research and translation by Lu Chen.