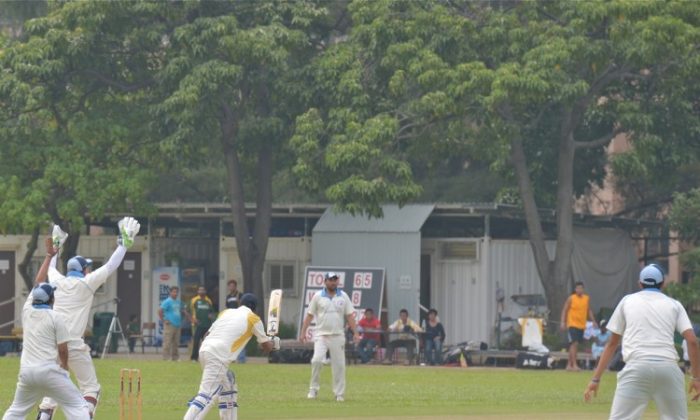 Oops ... missed catch. But this did not affect the result as the Vagabonds defeated SLCC by 22 runs last Sunday Sept. 30 at Mission Road, Hong Kong. (Bill Cox/The Epoch Times)
News

As might be expected from its colonial past and strong ex-pat community, cricket in Hong Kong is well developed, with many teams covering quite a range of abilities, age groups and gender.

The Hong Kong men’s team has been a member of the International Cricket Council (ICC) since 1969 and have played in ACC (Asian Cricket Council) Trophy competitions since 1982. The team has had some good performances over the last 12 years, reaching the final of the ACC Trophy in 2000 and 2006, and contesting the Asia Cup in 2004 and 2008, where they went on to defeat UAE to win the Asia Cup Elite in 2008.

After hosting and winning the ICC World League Div 3 in January 2011, they were promoted to play in ICC World League Div 2 in Dubai in April 2011, where they finished fourth. They were ranked 20th in the world in Twenty20 (T20) Cup cricket and reached the final against Afghanistan in the ACC T20 Cup in 2011, which qualified them for a place in the ICC World T20 Qualifier in 2012 where they finished 11th out of 16.

The national team is currently playing in the ACC Trophy Elite at various venues in the United Arab Emirates from Oct. 1 to Oct. 13 and later on this month, Hong Kong will welcome teams from many of the leading cricket nations to the KARP Group Hong Kong Cricket Sixes to be played on Oct. 27 and Oct. 28.

Domestically, the Hong Kong Cricket Association runs men’s Premier Leagues (Premier 1-Day, 2-Day and T20), below that there are the Sunday League and two divisions of Saturday League. In addition, there are knock-out cup competitions, women’s T20 and cricket league, plus junior leagues at U11, U13, U15 and U17 levels.

Women’s cricket was started in Hong Kong in 2001 and the HKCA Women’s Cricket League was formed in 2004-2005. This year, the HKCA Women’s League, which starts on Nov 3, has six teams competing. The same six teams are in the T20 Cup, which is ongoing and continues until April 2013. The first Hong Kong team played a match against Shanghai in 2006 and played a 3-match series against the Pakistan Women’s Cricket Team in Lahore in 2009.The high-spot for the team so far was their win in the inaugural ACC T20 series in Malaysia, a feat they repeated in 2011 in Kuwait.

“This is good news, I have been requesting for some time for the Association to include such a team in the upper echelon of Hong Kong cricket,” Chandrin Dissanayake told The Epoch Times.

“We were informed that the HKCA Executive Committee accepted our proposal a couple of days ago,” he added.

Premier League 1-Day matches are played in five rounds between September and April and the first round of four matches saw wins for KCC and HKCC against Pakistan Association AMSUA and LSW Prism, respectively. The next round of this competition is not until mid-November.

The Premier 2-Day series does not start until mid-December and the Premier T20 competition starts Nov. 24 and finishes on Jan. 6, 2013.

At the next lower level are the Sunday League 50 overs 1-Day games, followed by the Saturday League 35 overs matches. The 2012-2013 season of the Saturday League, which has 10 teams in each of two divisions, started at the beginning of September and they have now finished five rounds of matches.

The Sunday League has only just started its 2012-2013 season, with HKCC Optimists defeating USRC Millennium in the opening match of the season on Sept. 23.

In the match last weekend, Sunday Sept 30, Shaffi’s Vagabonds defeated SLCC by 22 runs in a low scoring match at the Mission Road ground.

The Vagabonds batted first and were all out for 90 runs in 30.2 overs, but Headwin SLCC could only muster 68 runs and were dismissed in 28.5 overs. The grass was a little long and lush making it rather difficult to hit boundaries along the ground, but the game was played with great enthusiasm and with one good innings the match could have gone either way. But on this occasion, the Vagabond’s bowling and good fielding won the day.

Sher Lama of Shaffi’s Vagabonds summed up their performance.

“Our bowlers did very well and they stuck to the plan, we had to get them out for less than 91 runs. We have two very good bowlers. The ball was keeping a little low, so I told them just bowl straight and we had a number of LBW’s by hitting the pads,” Lama explained to The Epoch Times.