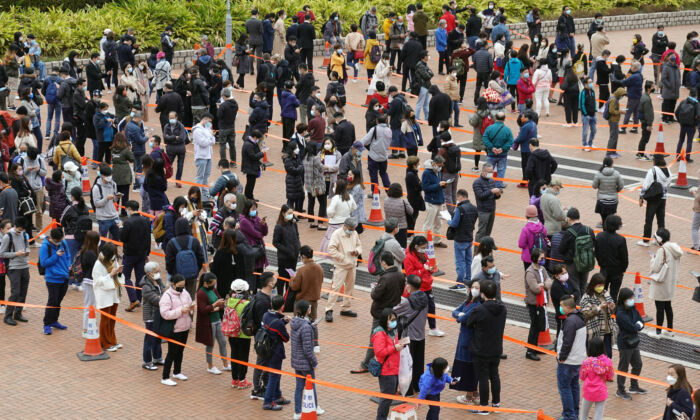 Hong Kong reported 986 new coronavirus infections on Thursday as authorities scramble to contain an outbreak which medical experts warn could see 28,000 daily cases by the end of March.

The rise in cases, up 10-fold since Feb. 1, is proving to be the biggest test for the global financial hub’s “dynamic zero” policy of virus suppression.

Leader Carrie Lam said she was “deeply sorry and anxious” as residents, including elderly and children, queued for hours at testing centers and to enter isolation facilities after daily infections doubled to a record 1,161 cases on Wednesday.

Writing on her official Facebook page, Lam said the government was working hard to enhance capacity and that the fast-spreading infections, hitting places like elderly care homes, were the last thing she wanted to see.

“Citizens have to wait for a long time to receive testing and a large number of people who have tested positive have been waiting for a long time for isolation facilities,” she said.

Three elderly people have died this week from coronavirus, authorities said on Thursday.

Hong Kong has reported more than 4,000 infections over the past two weeks, versus just two in December, taking its tally to more than 18,000 since the outbreak began in 2020, with 216 deaths, figures that are much lower than those seen in other major cities around the world.

The city could see 28,000 new cases a day by the end of March with its tally of deaths rising to 1,000 by June, health experts from the University of Hong Kong said this week.

The experts modeled scenarios that they said indicated Hong Kong could only return to a “zero-COVID” state if the entire city was locked down for two to three months.

Authorities have responded to the latest surge with the toughest suppression measures yet, despite an increasing social and economic toll on the city’s 7.5 million residents.

Public gatherings of more than two people are banned from Thursday while gatherings in homes have also been restricted. The rules add to already strict measures that have forced restaurants to close from 6 p.m. and shut most churches to schools, gyms, and cinemas.

About 200,000 people in the Discovery Bay residential area, where many foreigners live, have been ordered to get tested after the government said it detected coronavirus in sewage.

Typically, people are mandated to test if they have been in an area where infections are detected, and tens of thousands have thronged testing centers across the city in recent days.