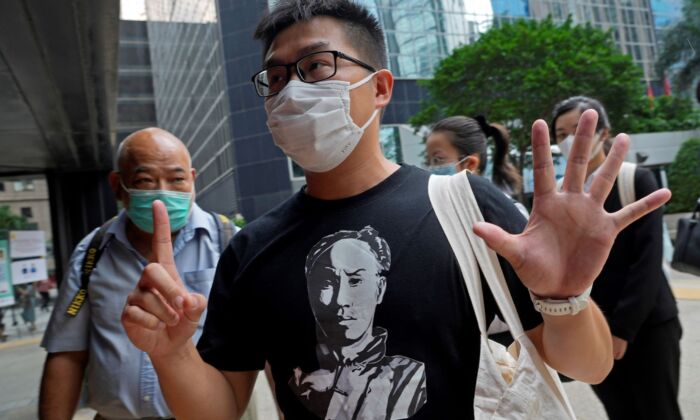 Hong Kong District Court handed down sentences on Sep. 1 to seven democracy activists for their involvement in an unauthorized rally during mass anti-government protests in 2019.

Last month, the seven activists pleaded guilty to charges of organizing and inciting others to participate in an assembly on Oct. 20, 2019, when tens of thousands took to the streets to protest the Chinese Communist Party’s (CCP) encroachment on Hong Kong’s freedoms.

Mass protests were triggered in mid-2019 after the city government announced plans to allow extradition to mainland China, but the protests later morphed into a broader movement demanding greater democracy and freedoms in the face of the CCP’s growing control over Hong Kong. Over several months, millions of people went to the streets to protest, where they were often met with riot police who fired tear gas and water cannons to disperse them.

Three activists were given the heaviest sentence of 16 months in prison, including Figo Chan, a former convenor of the now-dissolved Civil Human Rights Front; Leung Kwok-hung, who is known in Hong Kong as “Long Hair”; and Albert Ho, former chairman of the Democratic Party. Other defendants were sentenced to 11 to 14 months.

Six of the seven are currently serving terms in prison for convictions related to other unauthorized rallies. The Sept. 1 sentence will be served concurrently with the previous jail terms.

The only exception is Raphael Wong, former chairman of the League of Social Democrats (LSD) political party, who was sentenced to 14 months in prison.

Judge Amanda Woodcock said that while the city’s mini-constitution guarantees freedom of assembly, procession, and demonstration, those rights are “not absolute.”

Other pro-democracy advocates and political figures came to the courthouse to voice their support for the activists.

“We hope everyone understands that this is a political prosecution,” Chan Po-ying, the chairwoman of LSD, said outside court.

The case marks the latest punishment to be handed down against representatives of the city’s beleaguered pro-democracy movement.

Hong Kong has seen a drastic curtailment of its freedoms since Beijing imposed a draconian national security law last June, a move that has drawn international condemnation. Since then, dozens of pro-democracy figures have been charged under the law or similar offenses.

In July, the local court sentenced Tong Ying-kit, who drove a motorcycle carrying a banner bearing the slogan “Liberate Hong Kong, revolution of our times” in a 2020 protest, to nine years in prison.

Tong was the first person convicted under the national security law. The sweeping law criminalizes four broadly defined categories of offenses, including secession, subversion, and collusion with a foreign country. Persons found guilty of violating this law can face up to life in prison.

More than 100 people have been arrested under the national security law, leading to more than 60 charges, mostly against democratic politicians, activists, journalists, and students.

Since Beijing’s tightening clampdown on the city, many Hongkongers have chosen to leave. Over 89,000 residents left the city in the year that ended in June, according to government data. Its population fell by 1.2 percent, marking the largest drop in at least six decades.