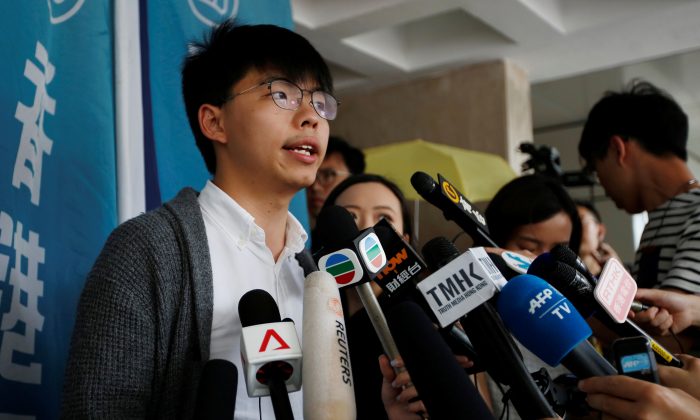 Hong Kong's pro-democracy activist Joshua Wong speaks to members of the media at the High Court in Hong Kong, China, on May 16, 2019. (James Pomfret/Reuters)
Hong Kong

HONG KONG—Hong Kong’s Court of Appeal sent a young leader of the Chinese-ruled city’s 2014 “Umbrella” pro-democracy street protests back to jail on May 16 for contempt of court, ruling out any motive other than ensuring a “deterrent sentence.”

Joshua Wong, 22, was sentenced to three months in jail in January 2018 for disobeying a court order and not leaving a protest zone during the rallies that blocked major roads in the Chinese-ruled city for nearly three months.

The Court of Appeal upheld the conviction but reduced his jail sentence to two months, citing his young age as a reason. He had earlier served six days before being released pending the appeal.

Wong, then just 17, was at the forefront of the broad civil disobedience movement that presented China’s Communist Party rulers in Beijing with one of their biggest political challenges in decades, accused by many of interference in Hong Kong’s affairs.

“It is an affront to the court and must be met with a deterrent sentence,” the three judges said in a written summary.

“Any suggestion that he is punished because of his status or notoriety as a committed social activist or any other reason, whatever it might be, is entirely baseless and misconceived.”

As guards led Wong away, he shouted, “Everyone keep going!” Dozens of supporters in the public gallery cheered back in response.

Dozens more had gathered outside the court building, some waving yellow umbrellas—the symbol of the 2014 protests.

“Even though they can lock up our bodies, they can’t lock up our minds,” Wong said as he entered court to hear the verdict.

Both Wong and his supporters also called for the scrapping of Hong Kong government proposals to remove long-standing blocks on extraditing wanted suspects from Hong Kong to countries with which the city has no extradition agreements—including mainland China.

More than 130,000 people flooded the streets of Hong Kong on April 28 to oppose proposed amendments to the city’s extradition laws.

Britain returned Hong Kong to Chinese rule in 1997 with a guarantee of wide-ranging freedoms, including an independent judiciary and freedom of speech, but critics accuse Beijing of increasing pressure on the freewheeling global financial hub.

Wong’s sentence comes as concerns widen over the extradition amendments, uniting some opposition, business, and legal groups as well as Western governments.

More street protests are expected in coming weeks, with some seeing the extradition plans as the latest sign of Beijing’s interference. China’s main representative “Liaison Office” in Hong Kong said in a statement on May 15 that the extradition law was urgently needed.

In a related case in February 2018, Hong Kong’s highest court freed Wong and two other leaders in a stark reversal of an earlier jail sentence, but warned against future acts of dissent.

By James Pomfret. The Epoch Times contributed to this report.