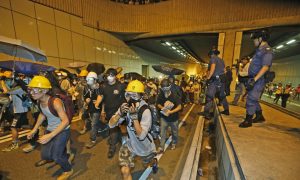 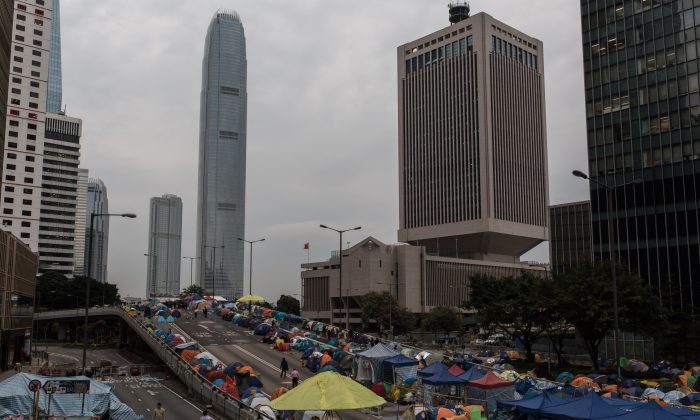 Pedestrians and protesters walk on a section of Harcourt Road, a multi-lane highway through the heart of the financial district currently blocked by pro-democracy protester barricades and hundreds of tents, in the Admiralty district of Hong Kong Kong on December 1, 2014. (Anthony Wallace/AFP/Getty Images)
China

Hong Kong’s high court granted an injunction to clear a main Occupy movement protest site on Monday following a night of violence between the Hong Kong police and pro-democracy protesters.

The bus company All China Express Limited applied for the injunction against protesters occupying Harcourt Road, Connaught Road Central, and most of Cotton Tree Drive in the Admiralty district in Hong Kong.

After hearings on Nov. 11 and Nov. 17, High Court judge Justice Thomas Au agreed with the plaintiffs that the protesters, who have occupied the roads for more than two months, were causing a public nuisance. He approved the interim injunction order on Dec. 1.

Coincidentally, the court issued its decision after a fresh round of clashes between police and protesters outside government offices in Admiralty the previous night.

At about 9:00 p.m. Hong Kong time (8:00 a.m. Eastern time) on Sunday, student leaders from the Hong Kong Federation of Students (HKFS) urged protesters gathered at the Admiralty protest site to surround government offices to stop Chief Executive Leung Chun-ying and the civil service from coming to work in the morning. Thousands rushed to the streets and seized Lung Wo Road, a key artery that protesters briefly occupied in mid-October.

Police soon arrived in force and a night of back-and-forth occupation and seizure ensued. Lung Wo Road was cleared and cleaned by about 2:30 a.m., retaken at 3:30 a.m., and cleared again at 7:30 a.m. During the second clearing, police drove protesters all the way back to their main encampment at Harcourt Road.

According to a police statement, 40 people were arrested and at least 40 were injured, 17 of which were police officers.

HKFS acknowledged that they were unsuccessful in their attempt to escalate the protests, which was recently set back by the loss of the other main protest site in Mong Kok and flagging public support towards continued occupation.

However, Chow noted that “the plan was a failure on the whole, given that even if some places were occupied, they were cleared by the police immediately,” Reuters reports.

Later that night, HKFS and Scholarism student leaders apologized to the Admiralty crowd for their haphazard planning. Scholarism’s Joshua Wong also said that he and two other members were starting a hunger strike to get the government to resume dialogue about protesters’ demands for democratic reform in Hong Kong.

Protesters on the ground are skeptical about Wong’s plan, stressing that despite more than sixty days of occupation and all they have done, the Hong Kong government has refused to engage the students in proper dialogue.

Meanwhile, the Hong Kong government seized the opportunity to pile pressure on the dejected protesters.

After the high court granted the injunction later in the day, embattled Chief Executive Leung Chun-ying hinted at further police action in a press conference.

“I have pointed out before that Occupy Central is not only illegal but it will also be in vain,” Leung said. “Now the [public] demand for police clearance is increasing.

“From now on, police will enforce the law without hesitation,” Leung added. “Some people have mistaken the police’s tolerance for weakness.”

The government also reiterated its desire to stick to the Chinese communist regime’s plans for democratic reform in the region.

In a press statement, the government stressed that “constitutional reform must be guided by the Basic Law and the decision of the National People’s Congress Standing Committee.”

Leung’s government also dismissed the students’ call for fuller democracy as “building castles in the air,” adding that their demands would merely “delay the constitutional and democratic development of Hong Kong.”

Student protesters are asking for true universal suffrage for the 2017 Chief Executive elections. Presently, nominees are chosen by a small, non-representative election committee over which Beijing has strong influence, and that same committee then chooses the chief executive from the small list of candidates it has approved.