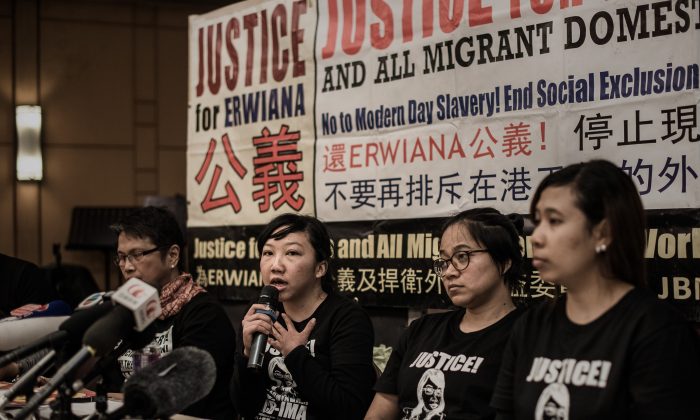 Indonesian former maid Erwiana Sulistyaningsih (C) answers questions during a press conference in Hong Kong on February 10, 2015 after her employer was convicted of beating her in a "torture" case that sparked international outrage and spotlighted the plight of migrant domestic workers in the Middle East and Asia. (Philippe Lopez/AFP/Getty Images)
Asia & Pacific

HONG KONG—A Hong Kong woman was convicted Tuesday of assaulting her Indonesian maid in a case that sparked outrage for the scale of its brutality and highlighted the vulnerabilities of migrants working as domestic staff across Asia and the Middle East.

A judge found Law Wan-tung guilty of 18 charges including grievous bodily harm, criminal intimidation and failure to pay wages or give time off work to Erwiana Sulistyaningsih.

The case gained widespread attention about a year ago after photos of her injuries circulated among Indonesians in Hong Kong. They showed her face, hands and legs covered with scabs and lacerations, and blackened, peeling skin around her feet.

District Court Judge Amanda Woodcock said that based on the testimony by the maid and other witnesses, “I am sure the defendant did assault, wound and threaten (Sulistyaningsih) as charged.”

The court heard that Law punched Sulistyaningsih in the mouth, fracturing some teeth; jammed a metal vacuum cleaner tube in her mouth, cutting her lip; and hit her on the back with a feather duster when she was sleeping. Law also forced Sulistyaningsih to stand naked in the bathroom during winter while she splashed water on her and pointed a fan at her.

Sulistyaningsih, who worked for Law for about eight months starting in June 2013, also wasn’t allowed any days off and was not paid her salary.

Law was found not guilty of two other charges. She was ordered to pay about 28,800 Hong Kong dollars ($3,700) in outstanding wages to Sulistyaningsih. Law was remanded into custody and is scheduled to be sentenced on Feb. 27.

After the verdict, supporters applauded the diminutive Sulistyaningsih, who was in court. She told reporters outside that she was happy “because I will get the justice from Hong Kong.”

There are about 330,000 foreign domestic helpers working in Hong Kong, almost all female and most from the Philippines or Indonesia, earning a minimum wage of about $500 a month.