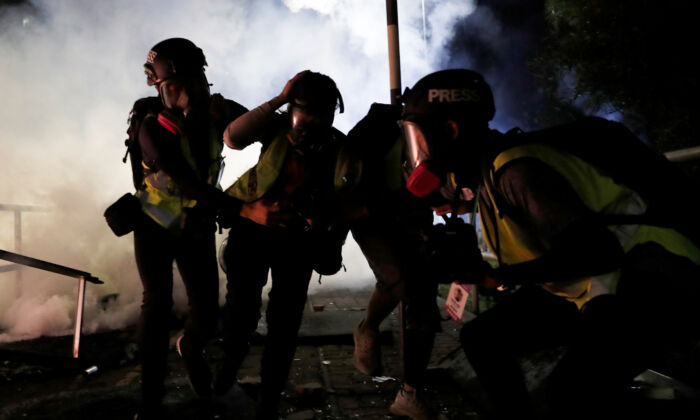 Protesters run during a standoff with riot police at the Chinese University of Hong Kong, in Hong Kong, on Nov. 12, 2019. (Tyrone Siu/Reuters)
HK Current Affairs

A Hong Kong district court convicted five Chinese University (CUHK) students of rioting and breaching a mask-ban during a protest in 2019.

On Sep. 3, the judge charged five students, aged between 20 to 23, with joint counts of rioting and using face covering during an illegal assembly on Nov. 11, 2019.

To quell protests, the city leader Carrie Lam invoked her emergency power to implement a mask ban in public gatherings later in October.

The public anger soon boiled over into violence, and tensions escalated after local police fired live rounds at protesters who were engaged in citywide strike action.

On Nov. 11, 2019, protesters at CUHK threw petrol bombs at police officers, who fired back with rubber bullets and tear gas.

Later that night, anti-riot police arrested the five near the CUHK’s Postgraduate Hall, a location close to a bridge where clashes broke out.

Judge Kathie Cheung said on Friday that the five dressed similar to what other protesters wore and remained at the scene. She said they must have “intended” to participate in the violence or “encouraged” others to take part in it, according to local media, HK01.

One student Cheung ruled of having this intent was Lau Chun-yuk. Lau said in his defense that he was only trapped at the stand-off on that day. He said he had the outfit for months to show his political stance.

Although the West Kowloon Court could not ascertain arrival time, it ruled that Lau could have expected violent acts at the bridge, according to local media.

The judge convicted Foo and Hui of possessing offensive weapons or instruments as the two failed to prove their seized metal hammerhead and a spanner were for schooling purposes.

The five are currently in custody. The court is scheduled to hand down sentences on Oct. 19.

As of February 2021, police have arrested (pdf) over 10,000 people related to the anti-extradition protests, according to the Hong Kong Department of Justice. More than 2,600 are going through or completed the judicial process.

The city also reported fatalities connected to police actions in the continuing pro-democracy movement in 2019. A 22-year-old student died from his injuries after falling one story from a parking garage where police had fired tear gas to disperse protesters in November 2019.