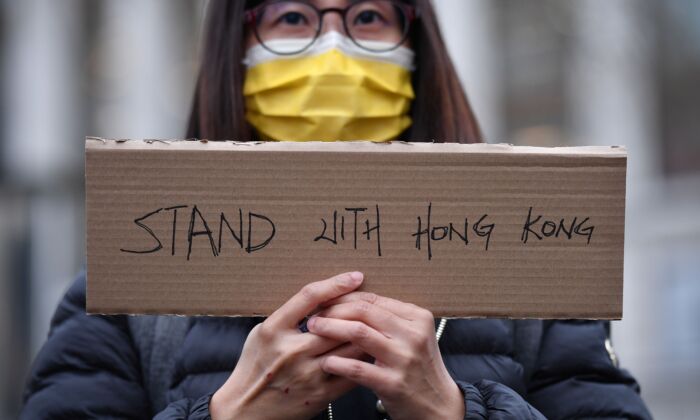 Julia Ye
Julia Ye is an Australian-based reporter who joined The Epoch Times in 2021. She mainly covers China-related issues and has been a reporter since 2003.
View profile
Follow
and Teresa Zhang

The Hong Kong government said it would consider banning the use of overseas communication platforms that expose personal information. According to several pro-communist media, Telegram, a social platform popular during the Anti-Extradition Law Amendment Bill Movement, may be banned. Some data experts pointed out that Russia tried to ban Telegram, but found it wasn’t technically feasible. They also questioned the different law enforcement standards of the Hong Kong government. While targeting Telegram, it ignored the pro-communist websites that expose the personal  information of Hong Kong pro-democracy activists.

Hong Kong Privacy Commissioner for Personal Data Chung Lai-ling said at a meeting of the Legislative Council Panel on Constitutional Affairs on May 16, since the implementation of the newly revised “Privacy Ordinance” six months ago, relevant behaviors are ongoing, and she will consider taking further action against platforms with rampant “privacy revealing” data, including invoking section 66L of the Privacy Ordinance to restrict the use of the relevant overseas platforms by the public.

A number of pro-CCP Hong Kong media quoted sources as saying that the platform the authorities are concerned about, Telegram, is commonly used by Hong Kong citizens. Most of the data exposing personal information involves political or social movements. Those who have had their private information published include officials, legislators, and police officers. The source also said that in recent months, the Office of the Privacy Commissioner for Personal Data, Hong Kong (the PCPD) requested Telegram to delete the “private” information but didn’t receive a direct response. The PCPD may consider restricting citizens from posting messages on Telegram, or even requesting the app be removed from the shelves.

Regarding the relevant reports, the PCPD replied to the media that it would not comment on the enforcement actions of individual cases.

Telegram spokesperson Remi Vaughn responded to the media that he was surprised by the news, emphasizing that Telegram has always strongly opposed the exposure of personal information and prohibits private content. The company regularly removes private content from around the world.

Wong Ho Wa, convener of the Open Data Group of the Internet Society of Hong Kong, told The Epoch Times that it is technically difficult for the government to block Telegram. For example, he said, in 2018, Telegram was banned in Russia by government order after it refused to give Russian authorities access to its encryption keys. The Russian government blocked about 1.8 million IP addresses but failed to fully block Telegram, eventually lifting the ban on Telegram in 2020. Other irrelevant websites were even blocked by mistake in the process. At present, the only thing that can block Telegram seems to be China’s “Great Firewall.”

Wong Ho Wa worries that if the Hong Kong government bans Telegram, other internet companies will also worry about the uncertainty of Hong Kong’s policies and business environment, and gradually transfer their business to other regions.

Wong Ho Wa also questioned the government’s law enforcement standards. The government has not dealt with “Hong Kong Leaks (hkleaks)” and other websites that exposed the personal information of participants in  the 2019 Hong Kong Protest. However, it is rumored that Telegram, which is larger and whose website is in a foreign country, is going to be blocked, which is strange. The PCPD should explain to the public the priority and criteria of law enforcement, and why Telegram is being dealt with before dealing with “Hong Kong Leaks.”

During the anti-extradition movement, the CCP instructed the Hong Kong government to violently suppress the protesters. Some netizens were dissatisfied with the police and pro-Communist factions for their actions and exposed their personal information on social networking sites. The High Court issued an interim injunction in October 2019 forbidding revealing the private information of police officers. Cheng Lai-king, former chairman of the Central and Western District Council, was arrested in 2020 for reprinting information about the police officer who allegedly shot a female reporter in the right eye and caused permanent blindness.

The Hong Kong government also implemented the newly revised “Privacy Ordinance” in October last year, which listed “revealing privacy” as a criminal offence. Those convicted in the indictment process can be fined 1 million yuan (about $150,000) and imprisoned for 5 years. On May 11, the police and the Office of the Privacy Commissioner arrested a 23-year-old man for allegedly disclosing the information of multiple police officers and members of the Legislative Council on social platforms.

Meanwhile, the pro-communist camp has widely released the personal information of Hong Kong pro-democracy activists online. For example, the website “Hong Kong Leaks” has collected data on a large number of pro-democracy ex-congressmen, pro-democracy Apple Daily reporters, and anti-extradition protesters’, including date of birth, photo, address, phone number, and more. The site continued to operate even after the authorities made “revealing privacy” a criminal offense, and the homepage of the website said: “The website will never be closed.”

Telegram, which played an important role in the anti-extradition movement, is a key target of the Hong Kong government. Telegram quickly became popular in 2019 as an important way to exchange information on the scene during the protest. Francis L. F Lee, Dean of the School of Journalism and Communication at the Chinese University of Hong Kong, once wrote that Telegram, together with the online forum Lian Deng, played the role of a “central platform” in this social movement.

After the anti-extradition movement, the Hong Kong government started punishing the activists who were using Telegram and Lian Deng Forum. On May 20, Ng Man-ho, a 26-year-old man accused of being the administrator of the Telegram channel “SUCK Channel,” was sentenced to six and a half years in prison for “conspiracy to incite.”

Elmer Yuen Gong-yi, a Hong Kong-based industrialist, said on the program True Words he expects that all foreign communication programs such as Telegram, Signal, and WhatsApp will be banned in the future, and mainland China’s  “Great Firewall” will definitely come to Hong Kong. It can be seen from the Shanghai lockdown that the CCP no longer takes into account the feelings of foreign businessmen.