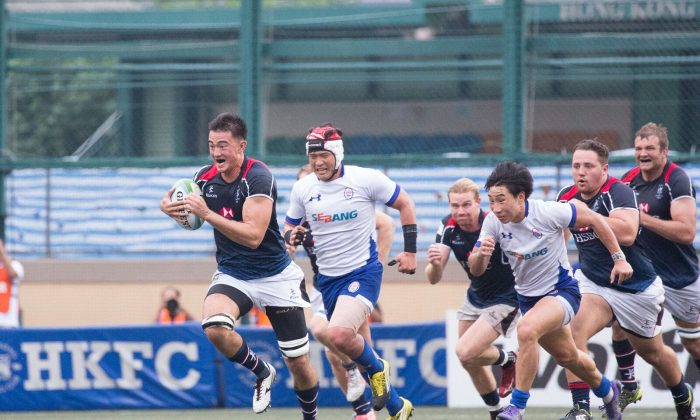 HONG KONG—Hong Kong produced a solid performance to outclass Korea 39-3 in the final match of the 2017 Asian Rugby Championship for 2017, at the Hong Kong Football Club on Saturday June 3.

The victory, Hong Kong’s 5th in row against Korea stretching back to 2015, meant Hong Kong came second in the Championship, with 10 points; Japan won with a maximum of 20 points (4 wins and 4 bonus points), and Korea with a solitary, but creditable bonus point, secured in their opening match against Japan.

The game on Saturday was a slow-burner in the stifling heat, but the Hong Kong substitutes in the second half, gave a much need injection of pace to the game to allow Hong Kong to finish the game strongly, with three well-worked tries.

Korea opened the scoring with a penalty goal in the 9th minute, from flyhalf Yu Jae-hyeok only for Hong Kong fullback Jamie Hood to level the scores 3-3, 2 minutes later. It wasn’t until the 26th minute, after a Korea error at the lineout that Hong Kong flanker Nick Hewson, gathered the loose ball to score Hong Kong’s first try, converted by Hood, to give them a 10-3 lead. A further penalty from Hood, extended the lead to 13-3 at half time.

In the second half the discipline and fitness of Hong Kong began to impact the game. The pack was more dominant giving Hong Kong cleaner ball in both set and loose play. That physical dominance led to a penalty try in the 45 minute, which edged Hong Kong further ahead 20-3.

The final flourish by Hong Kong was testimony to fitness and improved skills, increasingly evident from the professional programme in place by HKRU. The passing and ballhandling, plus the speed of movement, and thought, was evident in all three tries, and marked a distinct separation between Hong Kong and Korea as the game progressed.

Hong Kong will be pleased with their ARC campaign: the home and away victories against Korea were professional: and the losses to Japan closer than previous seasons. The penalty count is still too much: it breaks match continuity and momentum in play, If Hong Kong can reduce these errors progress will be faster. They have another yardstick to measure improvement when they tour Kenya in August, and continue to build on their ambition to qualify for the 2019 Rugby World Cup in Japan.

In Europe at the weekend, Hong Kong Ladies lost to Spain 41-18 in Valladolid, as part of their preparation for the 2017 Women’s Rugby World Cup. Spain ran out to an early 22-0 lead, before Hong Kong clawed back into the match. All Hong Kong’s points were scored by Aggie Poon, who put in a superlative performance.  Hong Kong play Japan next, home and away, in their final matches before the Dublin World Cup.

Grahame Carder is a sports enthusiast, former player and resident in Hong Kong