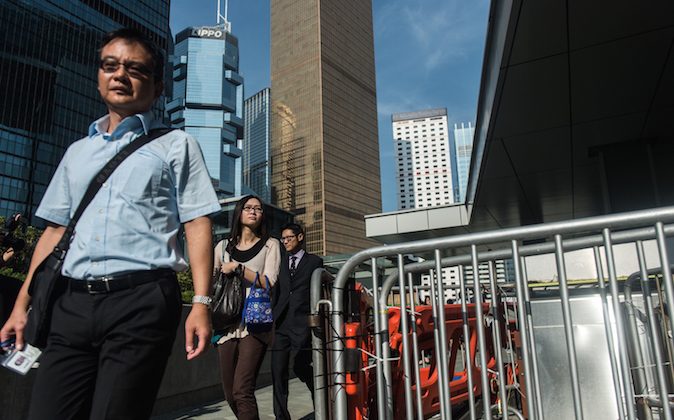 Civil servants walk past a barricade set up and reopened by pro-democracy protestors near the government headquarters as they return to work in Hong Kong on October 6, 2014. Hong Kong has been plunged into the worst political crisis since its 1997 handover as pro-democracy activists take over the streets following China's refusal to grant citizens full universal suffrage. (Anthony Wallace/AFP/Getty Images)
China

On the top of the full-page newspaper ad is an open letter entitled “An Open Letter from Civil Servants to Citizens,” which states: “We understand that if we were to ask the protesters to give up before achieving anything, it would be equivalent to the democracy moving ending in complete failure.”

“We don’t have any proposal for any possible solution. We just hope that the movement will have a happy ending so that people in Hong Kong can enjoy true democracy and social order can be restored to Hong Kong,” the letter states.

At the bottom of the full-page ad are pictures of employment I.D.s taken by the civil servants themselves to show their support.

The open letter was signed by 1,314 civil servants from 65 different departments. And the cost of the full-page ad, 46,200 HK dollars (approximately US$6,000) was paid for by donations by 55 civil servants.

“The struggle for true general election began back in 1988…We are not demanding special privileges, but rather, basic civil rights that are written in the Basic Law,” stated the open letter.

“For people who follow the Umbrella Revolution closely, traditional politicians have been marginalized. They cannot dictate the direction that the movement will go,” states the open letter.

“The activities at Admiralty, Causeway Bay, and Mong Kok on Sept. 28 simply could not have been incited by a single politician or pan-democracy party.”