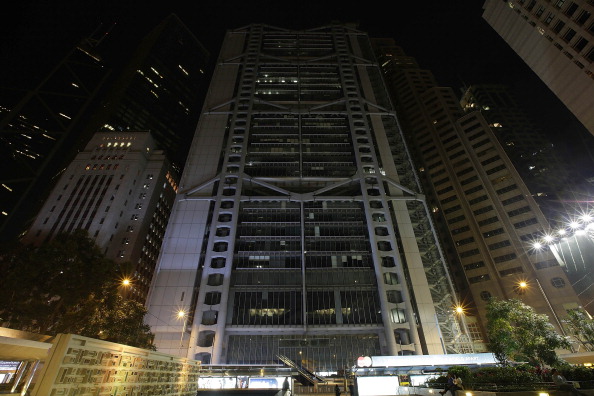 (L-R) The Bank of China Tower, Cheung Kong Centre, The HSBC Building and Standard Charter building are seen in the dark after the lights were switched off to recognize Earth Hour on March 23, 2013 in Hong Kong. Nestled in the 61st floor of the Bank of China Tower, the One Country Two Systems Research Institute rents some of the most expensive office space in the world. (Jessica Hromas/Getty Images)
China

HONG KONG—Nestled in the 61st floor of the Bank of China Tower, the One Country Two Systems Research Institute rents some of the most expensive office space in the world. This is not where one might expect to find a not-for-profit research centre, but a recent magazine article suggests this formerly obscure institute is full of surprises.

Next magazine’s Aug. 8 edition alleges the Institute, which was founded by Hong Kong chief executive Leung Chun-ying, receives public funding and uses that funding in part to pay for a Hong Kong version of the 50-cent Party. First known in mainland China, the members of the 50-cent Party are Internet minders who are said to be paid 50 cents per post to “guide” and monitor public discussion on the web.

According to a leaked Chinese Communist Party (CCP) 16-point directive, the 50-cent Party members practice a very up-to-date form of propaganda that is meant to influence without being detected. They learn how to assume fake identities and to post messages coaxing or inspiring netizens into moving their comments in a direction favorable to the CCP.

The 50-cent Party also uses various tactics to alarm, distract, or confuse netizens in order to interrupt or make incoherent discussions that are not taking what the CCP considers the “correct orientation.”

The Party members also sow discord by starting arguments. Forums that are difficult to control may be attacked with spam.

At the Institute, Hong Kong 50-cent Party members are called “Internet network investigators,” according to a former staffer named Ah Ho, who told his story to Next magazine. The “Internet network investigators,” which are more commonly known at the Institute as “network hatchets,” have to undergo special training for two weeks to learn how to rebut people’s criticisms of the CCP.

According to Ah Ho, working at the Institute is Fu Zhenzhong, a core member of the organization called Voice of Loving Hong Kong, which is widely believed to be a CCP front organization.

Fu Zhenzhong (formerly known as Chan Kongman) was a member of the Voice of Loving Hong Kong who took a prominent role in the protests this summer condemning the primary school teacher Ms. Alpais Lam Wai-sze. Ms. Lam had criticized the Hong Kong police for failing to protect the rights of Falun Gong practitioners.

Fu Zhenzhong, according to Next magazine, works at the Institute as an “Internet network investigator” and as a team leader of the public opinion research team.

Cheung Chi-kong is a non-official member of Hong Kong’s executive council and a writer with strong pro-CCP views. He is the Institute’s current executive director.

Barry Cheung Chun-yuen is also a non-official member of the Hong Kong executive council, a businessman, and formerly the head of the Hong Kong Mercantile Exchange and the Urban Renewal Authority. After coming under police investigation in May 2013, he resigned all of his official positions.

According to Ah Ho, Leung Chun-ying came by to say hello and welcomed everyone before the training of the “Internet Network Investigators” began.

Leung’s acting like he owned the place is not surprising. He founded the One Country Two Systems Economic Research Institute Limited in 1990 (In 1997, the Institute dropped the word “economic” from its name) and served as its director until two months before he assumed office.

Leung used the Institute, according to Next magazine, to aid him in his election campaign.

According to the information on file with the Hong Kong Companies Registry, in 2011 the Institute, which is a not-for-profit and tax-exempt organization, had total revenues of HK$13.26 million (US$1.71 million), comprised of donations at HK$10.4 million and additional research income of HK$2.86 million. Staff costs in 2011 were HK$6.51 million (US$840,000).

The Institute’s website boasts of having completed 13 research projects commissioned or sponsored by outside organizations, including eight projects for the Central Policy Unit of the Hong Kong government. None of these projects appears to have been done in recent years.

Next magazine claims the Institute is receiving funding from the Hong Kong government.

After the Next magazine article appeared, the Institute posted a message on its website saying the report is not true, it never hired a person called either Fu Zhenzhong or Chan Kongman, and it was turning the matter over to its lawyer. Almost two months have passed, and the Institute has not sued, according to sources at the magazine.

A receptionist at the Institute responded to a phone call requesting comment on this story by saying only the Institute’s director could comment and the director was not available.