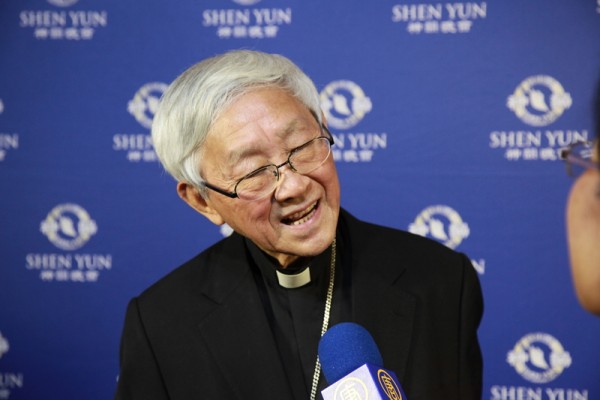 TAOYUAN, Taiwan—For internationally renowned Cardinal Joseph Zen Ze-kiun of the Hong Kong Catholic Church, the Shen Yun Performance at the Taoyuan Arts Center on April 14 was “a beautiful, perfect performance; it was amazing and enjoyable.”

“From the music to the dance to the animated backdrop, they were all gorgeous,” he said. “The traditional culture and the modern technology fused together seamlessly, allowing diversity and change, yet embodying a deep inner essence. It really was a perfect performance.”

Mr. Zen praised Shen Yun for promoting traditional moral values within its performance, saying that these values represented the true meaning of life. “Shen Yun unfolds the truth, the ultimate value of life,” he said. “People need to live by the truth, tell the truth, respect others from one’s true conscience.”

One of the most memorable pieces for Mr. Zen was the dance story Trial by Fire, in which Falun Gong practitioners are persecuted in China yet hold fast to their beliefs. “To be persecuted for telling the truth is not failure; we call this martyrdom,” said Mr. Zen. “Though some may see only what’s in front of them, we look further than that. We know that there is eternal life; we know that the heavens have bestowed them with courage.”

This story, he believed, also taught people the spirit of compassion. “They hold fast to the truth, but do so in a peaceful way. They hope that even those who have done wrong can ultimately understand and turn away from misdeed. This is different from a political power struggle; [Falun Gong practitioners] persevere because of their faith.”

As cardinal of the Catholic church, Mr. Zen connected the story in the dance to the plight of his own people. “We (Catholics) have also been persecuted for our beliefs, yet many people do not know about this. I hope that, by watching this performance, they can see the truth and welcome peace and safety.”

A renowned proponent of human rights, Mr. Zen further remarked on the topic of freedom of belief: “There are people in this world who do not like wisdom and truth because they are afraid. Then, when all they see is their immediate profit, they abandon their principles; they become without standards. I know that now in mainland China, they do not like martyrdom; even worse, they have forced our brothers to betray our religion.”

However, he believed that just like in “Trial by Fire,” those who maintain their beliefs would receive divine protection. “We believe that the heavens will bestow courage upon them; that is why so many people still revere truth and spiritual belief.”

Mr. Zen expressed his amazement of being able to experience China’s 5,000 years of civilization through one night of Shen Yun’s performance. “When our generation was at war, we had to struggle to maintain a basic standard of living,” he said, “But although we did not have the opportunity to learn and appreciate our culture, we knew that it was there and aspired toward it. But when the Chinese Communist Party came about, they abandoned all of this. It is a pity.”

Mr. Zen remarked, “Socialism is not a culture; it is merely a school of thought. When Hong Kong was ‘reunified,’ we hoped that along would come a reunification with our traditional culture. Not only did this fail to happen, Hong Kong was also stripped of the non-traditionally-Chinese yet still universally moralistic culture that it embodied in the years past.”

Mr. Zen stressed the importance of returning to traditional values, saying that without it, people allow themselves to abandon the truth and to live in a society full of lies. “This promotion of atheism has caused traditional culture to disappear; people no longer live by propriety and righteousness and they have no shame; there is no filial piety or family values.”

“China had an invaluable culture that was abandoned by the CCP,” Mr. Zen concluded. “Hopefully one day we can go back, and reclaim our lost tradition.”

Finally, Mr. Zen congratulated Shen Yun on its 10th anniversary since its founding, and added, “I hope that Shen Yun will continue to grow and flourish so that more people are able to see them. Hopefully one day, we will be able to see Shen Yun in Hong Kong.”