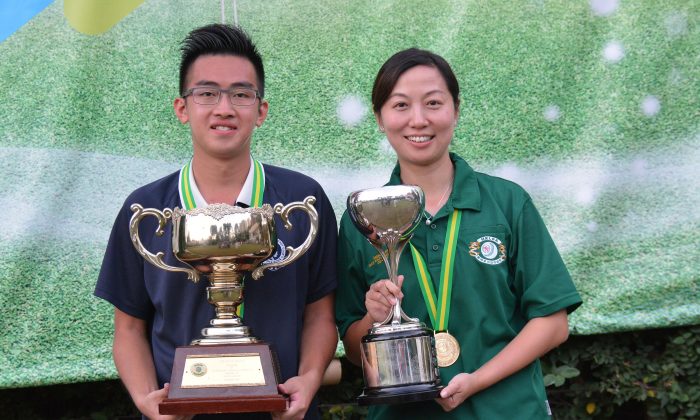 HONG KONG—Hong Kong bowlers made history on Sunday, November 8, by scooping both singles titles at the Hong Kong International Bowls Classic 2015. It is especially brilliant for local lady bowlers as they occupied all four semi-finals places and won the first ever women’s singles title for Hong Kong since its inauguration in 2008.

For the men’s competition, Jordi Lo became only the third Hong Kong bowler to take the singles title in its 30 years of history, and is the first since 1994 when Noel Kennedy won it.

Lo, who represented Craigengower Cricket Club to win the National Pairs and Fours earlier this year, started the Classic journey with an anxiety to prove that he can achieve results on his own. He played in four Classic tournaments before but never got through to the last 16.

His draw was not an easy one as he need to beat five overseas players to clinch the title. He started off in the first round against the defending pairs champion, Christopher Dagpin from the Philippines. In the following rounds he overcame Ronald Wong from Macau, Corey Wedlock from Australia and Mark Wilson from Ireland. He then defeated the defending champion, Robert Grant from Scotland, in the semi-finals to proceed to the final against Andrew Duncan from Ireland.

Duncan started the final well and won the first set 11:3 easily. In the second set Lo regroup himself to pull back a set at 9:3. During the three ends tie-breaker Lo took one shot from the first end and lost the second end by two shots. In the last end Lo pushed away Duncan’s shot and was holding two when Duncan had only the lost bowl to play. Duncan missed with a heavy draw and Lo was champion.

Lo admitted that he was not playing well in the final but still got the results, “There were mistakes throughout but luckily I got away with it. I tried to play more aggressively and fortunately the results were on my side.

“I have been practiced a lot since joining Craigengower Cricket Club two years ago. Playing at two finals this year really help me to get familiar with the atmosphere and taught me how to play under pressure. Keeping my composure is the key to my success today,” said Lo.

In the women’s competition, Hong Kong international and reigning Bowler of the Year Dorothy Yu began her women’s singles journey against Hong Kong team and Hong Kong Football Club teammate Camilla Leung, who also happened to be her skipper in the Premier League competition and was a runner-up in the Classic women’s singles in 2012. Yu started well and took the game 8:3, 7:2.

She then dispatched defending Pairs champion Ainie Knight from the Philippines in the second round, Catherine McMillen from Ireland in the third round and Australian Kristina Krstic in the fourth round.

Yu then beat Hong Kong team teammate and also the reigning Bowler of the Year Rita Tsui in the semi to reach the final against Millicent Lai from Seabird Sports Club.

The two players each took a set to push the game into tie-breaker. Yu won a single shot in the first end and followed with a full house in the second set to lift the title.

Yu said that consistence was the key to her success in the competition, “I have been able to maintain my touch throughout. With this touch, I know I can perform my standard to beat anyone. Despite the fact that I was not very steady in the second set, I got my touch back in the tiebreaker and got the results.

“The regular training with the Hong Kong team and the support from the audience also help me to perform during the final. The win will also boost my confidence ahead of the World Champion of Champions next week,” said a delighted Yu, who is departing to Gold Coast in Australia for the tournament this weekend.

The pairs competition will continue this week and the final will be played at Kowloon Bowling Green Club this Sunday, Nov 15. All finals will be broadcast live on internet and the link is available at the Hong Kong Lawn Bowls Association website of www.hklba.org.