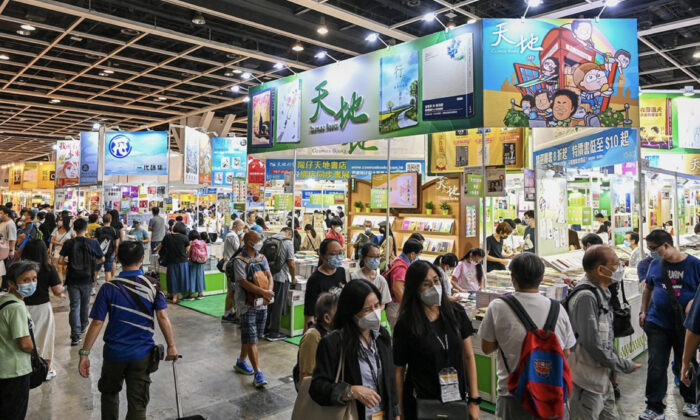 National security wipes out anything political or democratic.
By Connie Yuen

The 2022 Hong Kong Book Fair was held at the Wanchai Convention and Exhibition Centre for seven consecutive days from July 20, but the flow of people was much less than in previous years. The attendance number dropped significantly on the first day of the fair.

When reporters arrived at about 9 o’clock, they did not see the long queue outside the exhibition venue that was common on previous occasions. Instead, everybody could avoid lining up under red hot sunshine and enjoy cool air-conditioning at the fair.

Some attendees came as early as 5 a.m. to be sure of getting their autographed favorites in limited supply.

As part of the current safeguard against the pandemic, every attendant needed to use the “LeaveHomeSafe” app to scan the QR code and show a vaccine pass record before entering the venue. The organizer had pasted yellow banners to remind people to “maintain social distance” while queuing, but only a small number of people followed the advice.

It was a fine day, and the sun was shining brightly. Max, one attendant, arrived at around 7:00 a. m. He pointed out the main reason he came so early was, “I don’t want to sunbathe outside; it’s not good having a sauna there.” He pointed out that the crowd in the morning was “much less” than he expected. He had a budget of around $500 (US$64) to buy books and targeted those DSE-related exercise books to prepare for the upcoming university entrance examination.

The book fair provides many publications in one location for easy browsing and selection. When asked if he wanted to buy political books, Max said frankly, “There is censorship on books this year, and after such screening, those remaining here may not be what I prefer.”

Mr. Wong, another visitor, also arrived around 7 a.m. as he wanted to get an autographed edition. He said, “To come earlier means being able to feel more relaxed.” Mr. Wong believed the number of people was even less than last year. With no summer vacation this year, many young people might be unavailable.

Another attendant, Ms. Yuan, said she was there around 9 a.m. Usually, every year, she would come to the book fair on the opening day. She came not to buy books but to buy stationery. She felt that there were fewer people this year. “It is easier to get in this year; in the past, you would still be queuing under the sunshine at this time.” She also pointed out that although you needed to scan a QR code via the “LeaveHomeSafe” app,“ yet it was more like “machines waiting for people, not vice versa.”

Sparse Crowds and No Embarrassing Incidents

As the attendant count was low, embarrassing situations such as “trolleys’ running over someone’s shoes” were no longer seen.

The exhibition opened at 10:00 a.m., and the first few visitors “crossed the line” and rushed to their chosen booth. As usual, the big publishers occupied the most prominent positions.

An Epoch Times reporter visited several booksellers specializing in exercise books or homework supplements. The flow of people was somewhat sporadic, and it was easy to walk through the different book stalls; I never encountered “people bumping into people” or people stacking trolleys with books, as in the past.

Several publishers were refused participation in the exhibition, and the “Hongkongers’ Book Fair” they planned to hold as a spin-off was also canceled.

Still, the TDC maintained there was no pre-exhibition censorship.

The Epoch Times reporter visited several stalls and found only a minimal number of books deemed “politically sensitive,” but a few were still to be found, such as the former Hong Kong Governor Chris Patten’s new book “The Hong Kong Diaries,” British author George Orwell’s novel, “Animal Farm,” and reporter Guo’s “Hong Kong Lost Voice,” about the social situation in Hong Kong after the anti-extradition movement in 2019.

On the contrary, books related to Xi Jinping or Mao Zedong were placed in prominent locations and occupied quite a bit of space on some major publishers’ stands.

Mrs. Wu and her daughter went to one bookstore selling Mr. Ni’s books. She said she liked the book “Toys” very much, saying that Ni had extraordinary wisdom decades ago, and she admired him very much. Her daughter is also a fan of Ni. She thinks Ni Kuang was an intelligent person who expressed his thoughts directly.

The novels he wrote give people the desire to continue reading, especially the “Blue Blood Being.” Mrs. Wu said that as long as her daughter likes it, “I will buy Ni’s books because I am worried they will not be published anymore in the future.”