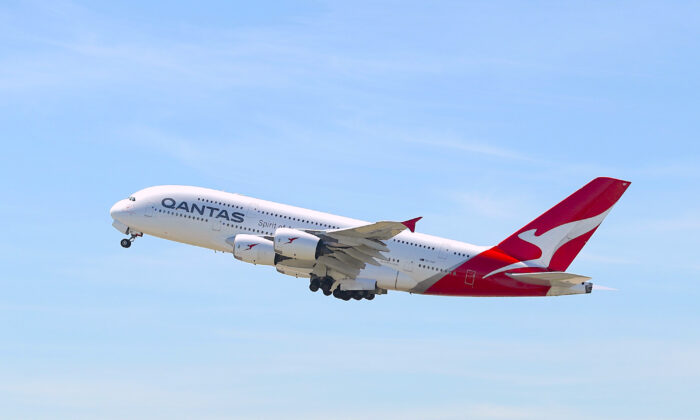 A Qantas aircraft takes off from the international terminal of Sydney Airport on March 19, 2020 in Sydney, Australia. (Mark Metcalfe/Getty Images)
International

Hong Kong authorities have announced a 14-day ban on flights from eight countries, including Australia, amid the latest Omicron outbreak.

Carrie Lam, the Beijing-appointed Hong Kong leader, announced on Jan.5 that incoming flights from Australia, the United Kingdom, the United States, Canada, France, the Philippines, India, and Pakistan will be banned from midnight on Jan. 8 until Jan. 21.

This comes as new clusters of Omicron appeared in the past week, with Hong Kong recording its first local Omicron transmission on the last day of 2021, which was a breach of one of the world’s most rigid COVID-19 restrictions.

The city had recorded 114 Omicron infections as of Tuesday when the first untraceable case emerged in almost three months. A total of 12,690 confirmed cases, including 213 deaths, were reported on the same day.

Lam said the epidemic situation in Hong Kong had worsened sharply in the past 24 hours. As a result, the Hong Kong government has held an emergency internal meeting, believing that the fifth wave of COVID-19 infections is imminent.

“We’re yet to see a fifth wave yet, but we’re on the verge,” she said at a press conference, adding that people are in a race against Omicron and taking timely measures will stop the variant from spreading in Hong Kong.

Major events, non-essential gatherings, and future cruise journeys would also be cancelled from midnight on Friday.

“The measures announced today can be described as decisive in the two-year response to the epidemic,” Lam said. “We have also taken swift, precise, and ruthless measures to cut the chain of transmission in the shortest time possible.”

The past year has seen the international finance hub’s freedom of speech and press further eroding. Over 60 pro-democracy groups, media, and trade unions were shut down by the National Security Law enacted by the Chinese Communist Party in 2020.

On Dec. 29, 2021, about 200 national security police officers raided the office of Stand News and arrested six current and former executives of the media, with Carrie Lam denying that press freedom “faces extinction” in her city.