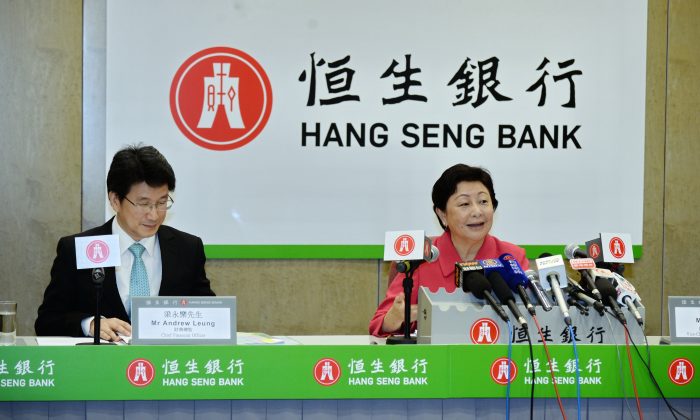 Rose Lee (R), the vice chairman and chief executive of Hang Seng Bank (HSB), on Aug. 5. Lee has expressed concerns that the bad debts of mainland China will start to appear in the second half of the year, so HSB will avoid giving loans to high-risk industries with overcapacity. (Bilong/Epoch Times)
China

Hong Kong has decided to strictly control the short-term capital flow to mainland China, and Hong Kong’s Hang Seng Bank (HSB) is planning to avoid giving loans to high-risk industries with overcapacity. HSB has expressed concern that the mainland’s bad debts will start to appear in the second half of the year.

According to the newest statistics from the China Banking Regulatory Commission, in the first half of the year China’s banking industry had non-performing loans of over one hundred billion dollars, and the holding of non-performing loans showed signs of spreading and rapidly growing.

China’s borrowing spree from Hong Kong has raised concerns over the associated risks. Hong Kong banks’ net claims on China as a percentage of their total claims approached 40 percent by the end of 2013, contrasted with zero percent by 2010 according to data from the Hong Kong Monetary Authority (HKMA).

The HKMA has strengthened its supervision over banks’ loans to mainland Chinese companies. However, HSB vice chairman and chief executive Rose Lee said at a recent press conference that the demand for cross-border loans from the mainland is still on the rise.

Another attractive factor is the relaxed policy of overseas loans under the domestic guarantee, which allows mainland Chinese companies to mortgage their assets in mainland China.

Mainland China’s regulators have been expecting the second half of the year to be full of bad loans due to the economic downturn and the decrease in demand for real estate. Lee said this is a situation everyone can understand.

“Will it affect the loans given by banks? That is hard to say,” Lee said.

However, she said that the loans to mainland China only account for a small portion of the loans to foreign banks, just as a considerable portion of state-owned enterprises and local companies are not HSB’s customers.

Lee said that at present, HSB mainly gives loans to pillar industries in tier-one and tier-two cities in China, such as traditional companies and industries in the Guangdong and Fujian regions. However, the bank will avoid loaning to the steel-manufacturing or shipbuilding industries, those they are not familiar with, or those with the possibility of overcapacity.

In the first half of this year, HSB has set aside funds to cover loans for several companies from mainland China, increasing the rate to 0.42 percent from last year’s 0.35 percent.

Fitch Ratings calculated that Hong Kong’s financial exposure to mainland China had reached US $798 billion, which is twice that of all the banks in the Asia-Pacific countries and regions.

Therefore the HKMA has set a new policy for all banks in Hong Kong, asking the 69 banks that have rising loans to immediately expand their long-term funding sources, such as retail savings. The HKMA advises banks to review information from borrowers in detail, especially for companies with annual loan increases of over 20 percent.

Many financial institutions in Hong Kong have expressed concern about the surge of Hong Kong loans to the mainland. Moody’s Corporation stated that in 2013, Hong Kong’s loans to mainland China have increased by 29 percent to about HK$2.3 trillion (US$297 billion), accounting for 20 percent of the local banks’ total assets.

HSB currently needs to reach the mainland Chinese market through Industrial Bank in China, and HSB has been asked many times whether it will sell its shares in Industrial Bank. Lee said that Industrial Bank is a long-term business partner, and they will flexibly examine various assets.

Translation by Veronica Wong. Written in English by Sally Appert.