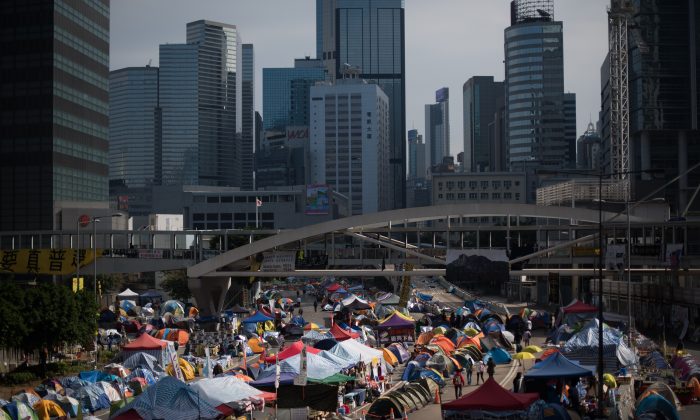 A general view shows tents on an occupied road at the movement's main protest site in the Admiralty district of Hong Kong on December 6, 2014. (Johannes Eisele/AFP/Getty Images)
China

For the first time in over two months of Umbrella protests, there’s a sense that the end is near. Authorities are expected to move in this week to clear out the last two protest sites in Admiralty, the seat of the Hong Kong government, and Causeway Bay, a retail neighborhood.

Only 300 protesters remain in the Admiralty tent city, according to Radio Television Hong Kong (RTHK), while the sliver of occupied ground in Causeway Bay has less than 50 protesters, the South China Morning Post (SCMP) reports.

Perhaps perceiving weakness, the authorities recently suggested strongly that the time has come to quell the illegal street occupations.

Hong Kong’s Legislative Council president Jasper Tsang suggested on Monday that the LegCo may secure injunctions to remove the protesters outside the legislature building. Tsang says that a decision will be made after all legislators have been consulted. Some pan-democratic lawmakers have already voiced opposition to the plan.

The same day, Hong Kong’s high court granted the All China Express bus company an injunction for the clearing of areas just outside the “Umbrella Square” main protest site in Admiralty. All China Express will publish the court orders in local newspapers and meet the bailiffs and Hong Kong police to discuss clearance details on Tuesday. Police are expected to officially announce the clearing date after the meeting.

Unlike the earlier Admiralty and Mong Kok injunction clearings, police won’t only stick to the areas stated in the injunctions. Citing a police source, SCMP reports that 3,000 police will be deployed on Thursday to wipe out the entire Admiralty protest site and the Causeway Bay encampment. Officers will remain in the protest sites after the clearing to prevent reoccupation attempts.

News that police are planning to end their occupation shouldn’t shock the student protesters.

On Sunday, Chief Executive Leung Chun-ying announced at a press conference that Admiralty and Causeway Bay would be cleared “in due course.” Leung added that he expects “fierce resistance” from the protesters when the police move in, and predicts that those who stay would be “increasingly radical.”

At least one student group could prove Leung right.

The newly formed Student Front group says that they will defend the protest sites with their shields instead of surrendering. The group feels that the protests cannot be limited to nonviolent acts, Reuters reports.

Speaking from a podium in “Umbrella Square,” a Student Front member announced that the group won’t initiate attacks, but is organized for action and will try higher-risk activities.

Other prominent student groups insist that they will remain at the protest sites, stick to their nonviolent principles, and turn themselves in.

“No retreat at this stage is our decision now,” said Yvonne Leung, the Hong Kong Federation of Students’ spokesperson, according to the Wall Street Journal. HKFS had earlier considered pulling out of the protests.

Oscar Lai, Scholarism’s spokesperson, tells protesters not to “fight hard against police” because it would give the police “an excuse to clear the whole area.”

Scholarism leader Joshua Wong says that his group will remain peaceful during the Admiralty clearing, and will ask all secondary school students and elderly protesters to leave the occupied areas if police move in, according to RTHK.

Wong, who was nabbed during the Mong Kok clearing on Nov. 26, added that protesters should “prepare to be arrested, not beaten.”