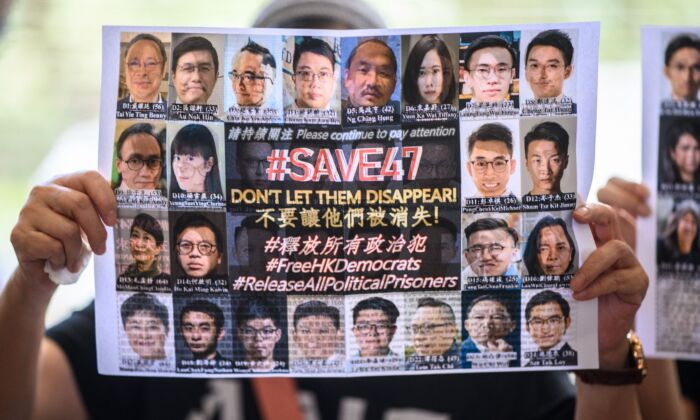 A supporter holds a poster showing some of the 47 pro-democracy activists on trial at the West Kowloon Court in Hong Kong on July 8, 2021, on charges of conspiracy to commit subversion under the National Security Law for taking part in unauthorized pro-democracy primaries in July 2020. (Anthony Kwan/AFP via Getty Images)
UK

After resigning from her position as Wan Chai District Councillor in Hong Kong, art curator Clara Chueng and her family moved to the UK last July. They also moved C&G Artpartment, the art space she co-founded with her husband Gum to the UK. After six months, they curated their first art exhibition in the UK “The 24901-Mile-Wide Red Line.”

Explaining the number 24,901 in the exhibition title, Ms. Cheung said: “24,901 miles is the equatorial circumference of the earth, and the ‘red line’ is the censorship line extended by the Chinese Communist Party (CCP) to the world. In addition to exhibiting works that are no longer possible to show in Hong Kong, artists from Myanmar and Thailand are also invited to participate. I want to continue to explore whether the power of the ‘Milk Tea Alliance’ can be extended.”

A year ago, Ms. Cheung, who was still serving as a district councilor, and another district councilor artist, were interviewed about the political “red line” issues triggered by the Hong Kong National Security Law through the issue of the M+ Museum’s art exhibits. In the following year, freedom of speech in the media was restricted, and Hong Kong artists faced the most severe political censorship in decades. Ms. Cheung, who had never considered leaving Hong Kong had no choice but to join the tide of immigration from her home country. “Everyone knows that the current political environment no longer allows everyone to join together to make changes. I quit my job and went to the UK to try to open up different spaces and opportunities, and continue with art curation and creation.”

She realized that the CCP’s red line of censorship targeted not only Hong Kong, but has extended to all parts of the world. She hopes to dispel the fear in people’s hearts as artists can speak through the platform of their exhibitions and continue to cry for freedom where there is still a voice.

After coming to the UK, Ms. Cheung contacted some artists from different countries, such as Mayo Naing, Sai and Min Ma Naing from Myanmar. She said: “It was sad to learn about their stories, some of them left their countries one or two years earlier to escape the regime’s suppression, and it was difficult for their creations to be exhibited publicly in their country or region. I realized that the CCP uses the economic ‘Belt and Road Initiative’ to control the resources of Southeast Asian countries, as well as control their cultures. Many of these countries have to obey the CCP [to maintain] their interests and it threatens their people with a censorship ‘red line.’”

Inspired by the experiences of Burmese and Thai artists, the current C&G Artpartment’s exhibition includes Hong Kong and international artists.

Although some of the artworks in this exhibition are from Hong Kong, they cannot be exhibited there. Ms. Cheung believes that they don’t violate the Hong Kong National Security Law, and there is no so-called “incitement,” but in the current environment of Hong Kong, she has no idea when a piece of art will touch the “red line.”

She gave an example of a piece that reflected the housing problem in Hong Kong. It was a film by non-profit organizations, and was banned after the Hong Kong National Security Law was implemented. It wasn’t banned because of the overall content, but because there were some street scenes with protest slogans, and some scenes showing people fighting for democratic rights and human rights at the end of the film.

Under the current environment, she plans to have some discussions through this exhibition: “Actually, under the National Security Law, it is not the direct suppression or control of creative content that raises problems, it is because this law created the problems and filled [people] with white terror. It is really sad. You can imagine that if Hong Kong continues like this, the content of creation will be narrowed all the way. If art really wants to be promoted, it must be given space for creations, it must have multiple voices to be creative.”

When Ms. Cheung invited artists to participate in the exhibition, she felt that they participated with the mindset of going all out: “Everyone is in the same boat to keep it up, we are going all out and connect together. I hope that through this art exhibition, with the participation of different artists, we can show works that cannot be exhibited in our own country. This is a link and gives us more opportunities to understand the enemy we are facing together.”

She said that what the CCP is doing now is spreading white terror around the world to silence everyone through self-censorship. It would be the saddest thing if people just obeyed the CCP. What she can do is create a platform in the limited space she has. First,  she must psychologically get rid of the white terror produced by the CCP and give artists opportunities to create freely.

The Inspiring Story of Lo Ting

Ms. Cheung did not have her own art works for the exhibitions in Manchester and Sheffield, but she will continue to create a series of works about Lo Ting, a character from Hong Kong mythology. Lo Ting was a tribe of  half-man half-fish who walked on land and swam in the sea. Lo Ting was a member of the Lo Ting tribe.

After Ms. Cheung immigrated to Sheffield, England, she still spontaneously set up street stands to unite Hong Kong people and locals with art forms such as street calligraphy, sculpture exhibitions, and the construction of “Lennon Wall.” This idea was also inspired by the Story of Lo Ting: “Recently, I have been doing street stands and cultural activities with other Hong Kong friends. I think this is the first step for us new immigrants from Hong Kong. Everyone should join together and unite the separated Hong Kong ethnic groups. We need to have a foundation of community before we can take the next step.”

She also mentioned the film “Revolution of Our Times” recently released in the UK, and said she was deeply impressed by a pair of gloves used by a protester in the film: “He used this pair of gloves during the Umbrella Movement in 2014, and went on the streets all the way to 2019. I think this is a warning to us from the directors and creators. After 2019, we still have to wear these gloves, don’t throw them away, we’re waiting for the next opportunity.”

Whether it’s an art exhibition about political censorship or a street stand to continue telling the story of Hong Kong, Ms. Cheung believes that everything she does is trying to send a message to Western society: “Hong Kong is not China.” She explained, the difference between Hong Kong and mainland China is that Hong Kong people still have the spirit of upholding democracy and are not enslaved by the CCP.

She said she understands that now, it is difficult to speak as freely in Hong Kong as people could before. There are a lot of restrictions and the atmosphere is full of white terror. But she could speak up when she came to Britain, a free country. She believes that “the story is not over” and she cannot give up. She wants to tell the international community that there is still a group of conscientious people in Hong Kong who are silently enduring and waiting for the dawn.

Ms. Cheung lives in Britain now but says she still cares about the prisoners of Hong Kong: “I also appeal to some people living in the UK to sign joint signature to the British Parliament, asking the Hong Kong government to release all political prisoners, they have no freedom of speech or creation. I also hope that Hong Kong people who come to the UK will use their votes to ask the British government to respond to Hong Kong affairs. The UK and Hong Kong have a long history. Don’t give up and continue to uphold our beliefs.”

Click here for details about the upcoming exhibits in Manchester and Sheffield.