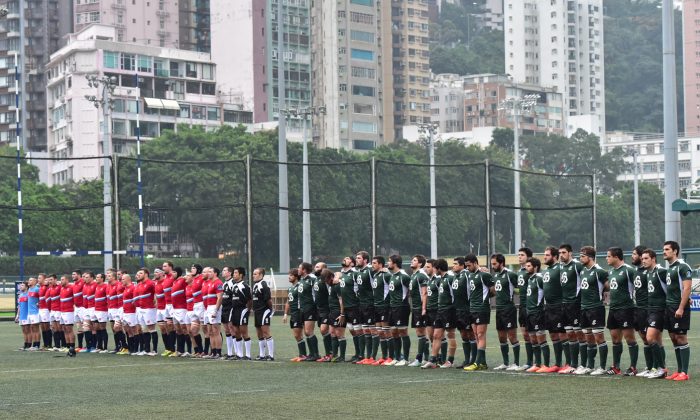 Portugal (green) and Russia (red) line up before the start of their match in the 2015 Cup of Nations in Hong Kong on Friday Nov 13, 2015. (Bill Cox/Epoch Times)
HK Rugby Union

HONG KONG─On an inclement Friday Nov 13 evening in Hong Kong the first matches of the Cup of Nations 2015 resulted in Hong Kong and Russia both coming away with wins to take them to the top of the table but Hong Kong have a slender, one point lead after scoring a late bonus point try. In the early match Russia beat Portugal 23-12 while Hong Kong ran out 30-11 winners over Zimbabwe.

In the afternoon European confrontation between Portugal and Russia both teams took time to settle in the heavy rain at the start of the match with handling errors spoiling game continuity. With both teams concentrating on forwards play, Portugal showed strength in their pack causing disruption and errors by Russia at the scrums and pushing toward the Russian line. But on most occasions handling errors halted progress.

Portugal took early advantage of kickable penalties moving the score to 6-0 after 30minutes of play. But a penalty opportunity close to the Portugal 22 enabled Russia’s fly half, Sergey Yanyushkin to notch up their first points. Russia leveled the score on 38minutes with a second penalty from 30metres making the score 6-6 at half time.

Portugal pushed ahead to 12-6 as the similarly disruptive play continued into the second half but then Russia suddenly opened up the game with some fast handling and good movement across the field, resulting in their fullback and captain Vasily Artemyev surging through after 60 minutes of play to score Russia’s first try. This was converted by Yanyushkin to push Russia into a 13-12 lead. A similar move 8-minutyes later produced a similar result with their No 13, Igor Galinovsky scoring in the corner. This try were also converted by Yanyushkin from a wide position near their left touch line. A final penalty for Russia in the 77th minute took the score to 23-12.

In the later match between Hong Kong and Zimbabwe, watched by a good size crowd, Hong Kong attacked immediately from the kick off surging towards the Zimbabwe line but this was effectively countered with both teams showing intent on fast open rugby.

Hong Kong continued to attack and was rewarded in the 5th minute with a long kickable penalty with was effectively dispatched by fly half Ben Rimene to put 3-points on the board.

Play ebbed and flowed with many good attacking moves but crucial final errors reversed the direction of play. But after 20 minutes of play Hong Kong set up several attacking movements near the Zimbabwe tryline with scrum half Tom Marshall going over to make the score 8-0. Rimene just missed out with the conversion with it hitting the upright.

After further good attacking play Charles Higson-Smith made a surging run up the centre-left of the field, breaking through several tackles before reaching the tryline to score in the 27 minute. Again the conversion was missed leaving the score at 13-0. Following several attacks near the Zimbabwe line, Hong Kong were finally awarded a penalty try on the 35th minute for Zimbabwe intentionally kicking a ball from within a 5-metre scrum. Rimeme converted to take the score to 20-0.

A yellow card against Hong Kong new cap Cunningham in the 38th minute changed the balance of play but the score remained 20-0 at half time.

Zimbabwe regrouped at the interval and after Matt Lamming was yellow carded 8-minutes into the second half, they clawed back points with penalties against Hong Kong on the 48th and 52nd minutes. Zimbabwe changed their game and instead of trying to run ball out of their 22 they started place kicking effectively moving the attack up field. Much of the second half was in Hong Kong territory with Zimbabwe’s Sanele Sibanda scored in the 63rd minute to take the score to 20-11. The conversion to put them within one score was missed.

Hong Kong then made several changes bringing on Jamie Tsang, Paul Dwyer, Jamie Pincott, Toby Fenn, James Robinson, Charles Cheung at Scrum half and Niall Rowark at flyhalf. The new line-up made progress gaining a penalty on 73 minutes push the score to 23-11 and a final last gasp try by Brad Raper with conversion by Rowak took the score 30-11.

Points and Next Matches

After the first day of matches Hong Kong lead with 5-points, Russia is lying second on 4-points and Portugal and Zimbabwe have yet to score.

Next matches are on Tuesday on Nov 17 with Russia against Zimbabwe at 4:00pm and Hong Kong against Portugal at 7:00pm both matches will be at the Hong Kong Football Club.