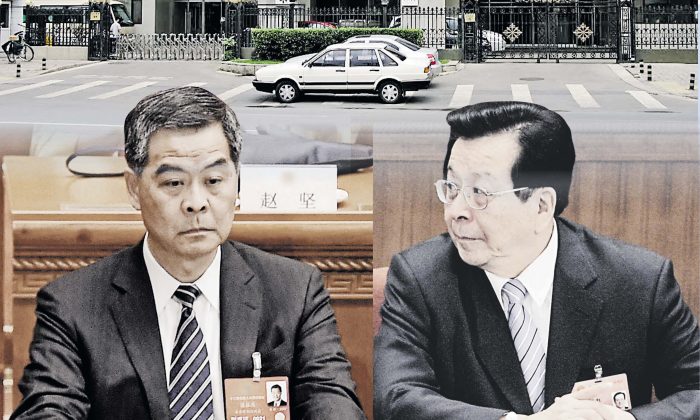 The upcoming inspection of the Hong Kong and Macau Affairs Office is believed to be aimed at cleaning up the remaining influences of Jiang Zemin and former vice-chairman Zeng Qinghong in Hong Kong. (Compilation by Epoch Times)
HK Current Affairs

The upcoming inspection of the Chinese Communist Party’s political organ in Hong Kong could spell the downfall of a former top Party official in charge of the city’s affairs—and even impact Hong Kong’s political future.

On June 22, the Party’s anti-corruption agency announced that 32 state and Party organisations, and 4 provinces and cities will be probed in the latest round of anti-corruption inspections.

Making the inspection list for the first time is the Hong Kong and Macau Affairs Office (HKMAO), the administrative arm of the Chinese regime in charge of the affairs of the semi-autonomous region of Hong Kong.

In January, the anti-corruption agency assigned inspection team leader Li Qiufang to the Office, and made her responsible for discipline inspection work. Less than a week into her new posting, Li was swamped with complaint letters, according to reports in the Hong Kong media.

Analysts believe that the recent anti-corruption activity in Hong Kong is closely related to Party leader Xi Jinping’s efforts at dismantling the political network of Jiang Zemin, and consolidating his own position.

Hong Kong and Macau Affairs Office was established in 1978, and belongs to the State Council of the People’s Republic of China, the regime’s highest administrative body. After the British handover of Hong Kong in 1997, Beijing established a HKMAO branch in the city.

While the HKMAO came under the purview of the anti-corruption agency in 2014, discipline inspections were delegated to the inspection team stationed in the General Office of the State Council.

Current affairs commentator Li Linyi told Epoch Times that the HKMAO had escaped inspection previously on grounds of its “national security” roles of intelligence gathering and overseeing communist united front work. Now, however, a dedicated anti-corruption investigation team with important political “ammunition” is running the inspections—and the results of the probe could be announced by the year’s end.

Hong Kong has long been under the purview of the political faction headed by former Party leader Jiang Zemin. Since the handover, Hong Kong has become a haven for Party officials and their families to generate profits, immigrate, launder money, and transfer assets out of China.

The inspections in Hong Kong appear to be aimed at the removing a formerly powerful Party cadre who was once very influential in the city.

Xin Ziling, a former director of the editorial desk at China National Defense Univer­sity, told Epoch Times that Jiang Zemin’s family and supporters in his powerbase in Shanghai are currently being investigated, and the main target in Hong Kong is former Chinese vice-chairman and Jiang loyalist Zeng Qinghong.

“When Zeng Qinghong was vice-chairman, he was also in charge of Hong Kong and Macau, and was able to develop a group of supporters. Some of these supporters had access to state secrets, and were rather powerful. Zeng Qinghuai, the brother of Zeng Qinghong, also happened to be more prominent in Hong Kong than in mainland China.”

Xin stressed: “Hong Kong has long been under the control of Jiang Zemin and Zeng Qinghong. Zeng Qinghong also made his brother Zeng Qinghuai chief of the spy agency in Hong Kong and Macau, Xi Jinping is now cleaning out their influence in Hong Kong.”

Since corrupt Party officials are bound to be removed in Hong Kong and the mainland in the impending anti-corruption inspections, Xin Ziling the former defense official feels that the inspections are vital because they will directly affect Hong Kong’s political future.