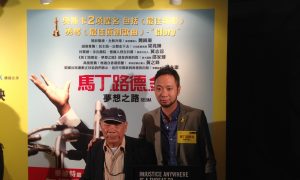 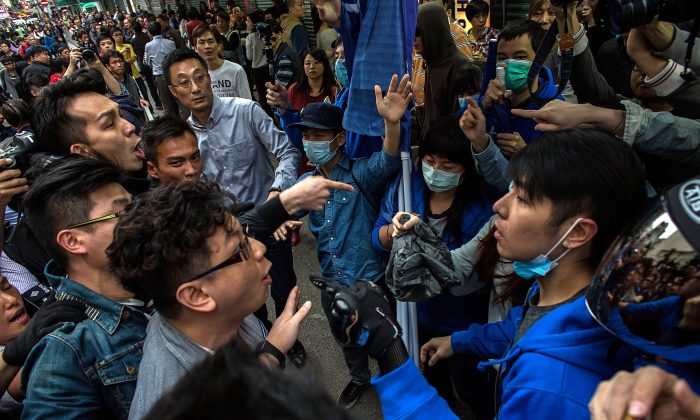 HONG KONG—There are better ways to spend a Sunday in Hong Kong than standing on cramped sidewalks, shouting at shoppers dragging suitcases, and dodging police pepper spray and handcuffs.

But since early February, hundreds of Hongkongers have been doing just that, with weekly demonstrations against so-called parallel traders, the throngs of mainland Chinese from just across the border who travel in and out of Hong Kong to scoop up milk powder, diapers, cosmetics, and electronics for resale in the mainland.

“Hong Kong people are venting their anger,” said Kel, one of the protesters, during a police-approved rally in the border town of Yuen Long in March. “We are pressuring the government to fix the issue.” The influx of Chinese traders has changed the makeup of retail spaces in Hong Kong’s border districts, and residents complain that it’s affecting their daily lives.

Frustrated at both the local and Chinese authorities’ lack of interest in the issue, locals are forming so-called nativist protest groups, aimed at “protecting” the way of life they’re used to, by heckling mainland traders and blocking off their favorite stores.

Stroll through Hong Kong’s border towns—Sheung Shui, Yuen Long, and Tuen Mun in particular—and the signs of parallel trading are hard to miss.

More than 50 pharmacies—literally one every fourth shop—are found along rows of cramped shophouses near main and side streets. These “pharmacies” don’t actually sell pharmaceuticals, though. Instead, cans of infant formula and boxes of chocolates are stacked high near entrances. One “pharmacy” on Sau Fu Street in Yuen Long simply calls itself “Milk Powder Wholesale City.”

Milk powder manufactured outside China is highly sought after by mainlanders, after domestic supplies were found to be poisoned with chemicals in 2008. Mainlanders’ insatiable demand for unsullied powdered milk around the globe has led to a raft of laws limiting the quantity people can purchase and take out of the country—in Hong Kong, it’s just under four pounds, or roughly two cans.

Parallel trading arose because goods from Hong Kong can be sold at a markup in China, where they’re consider safer and better quality, and having individuals buy goods in small quantities and schlep them just across the border beats import taxes.

The  proliferation of pharmacies, or milk powder retail outlets, has changed the cityscape of northern Hong Kong.

Decades-old shops and restaurants that “sell affordable local fare” are forced to fold because they “simply can’t afford” the skyrocketing rent, said Ms. Fong, a Yuen Long resident who joined the recent protests.

Some restaurants in Yuen Long are paying over $3,200 in rental now, up from $1,675 merely two months back, according to local district councilor Johnny Mak.

Indeed, shop rental in the border districts has shot up by as much as three times over the past five years, Hong Kong newspaper Apple Daily reports. Some “pharmacies” in Sheung Shui are even paying more rent than shops in the Tsim Sha Tsui luxury retail district.

Ah Ming (not his real name), a Shenzhen resident, said that it is common for mainlanders who do their weekend shopping in Hong Kong to engage in some lucrative trading on the side.

The father of two adds that a trader making two day-trips can expect to make about $1,300 a month. And with cheap and fast public transportation—it takes about 20 minutes to get to Shenzhen by bus—traders can be back before sunset for another trip.

It’s easy for mainlanders to enter Hong Kong. Since 2009, Shenzhen residents have been allowed yearlong, multiple-entry permits, and an estimated 47 million mainland tourists visited the city in 2014, according to the Hong Kong Tourism Board. Nearly 28 million were day-trippers.

After making their purchases, shoppers make for nearby parks and public spaces to repack the goods into large suitcases, backpacks, and even baby strollers. Empty cardboard boxes or plastic foam packages are left to blow through the streets.

While parallel trading is perfectly legal, Hongkongers are annoyed with being crowded off their already narrow sidewalks, and they chafe at what they often consider the loud, obnoxious sounds of Mandarin, the Chinese language spoken in the mainland, but which is practically foreign to the Cantonese-speaking Hongkongers.

Ronald Leung, a warehouse supervisor, is a co-founder of the North District Parallel Imports Concern Group, which speaks out against parallel trading in Sheung Shui, a town bordering Shenzhen, which gets much of the foot traffic.

“A mainlander told me ‘Hong Kong is our warehouse,'” said Leung. “We have to let them know that Sheung Shui is not a shop for them.”

From 2012 to 2013, Leung’s group videoed traders in action and shared the clips on Facebook, staged six protests at the Sheung Shui train station, and petitioned the Hong Kong government.

But the local and central governments declined to address the issue. No laws are being violated, after all.

The traders retreated when police stepped up patrols in the area following complaints, but returned soon after the police left.

Given the lack of policy aimed at addressing the issue, radical localist groups like HK Indigenous and Civic Passion have stepped into the breach this year, organizing loud crowds to confront border traders.

Protests are usually announced via a Facebook event page, both by localist groups and anonymous individuals.

“Being unable to reflect their unhappiness to Beijing, Hongkongers are instead directing their frustration toward mainland shoppers,” said district councilor Johnny Mak, who led some Yuen Long residents to join a March 1 anti-parallel trade rally.

While there were complaints that the protesters clogged sidewalks, forced shops to close early, and were just as raucous as the traders, Mak felt that the inconvenience should be overlooked.

Hong Kong is split on the matter.

While some residents are supportive of the protests, reflexively sympathetic to those who complain that their own spaces have been invaded by outsiders, democratic lawmakers—usually concerned with Hong Kong’s autonomy from the mainland—are growing increasingly uncomfortable with the rhetoric and dashes of violence.

When demonstrators kicked two elderly men at a demonstration in Tuen Mun on March 11, Claudia Mo from Hong Kong’s Civic Party, one of the largest in the legislature, said in a press conference: “Hongkongers won’t accept violent protests … In fact, it’ll only harm the entire pro-democracy movement.” (The violence took place after one mainlander allegedly molested a female protester.)

But localist groups and their supporters hold that police aggression—pepper spray, swinging batons, and forceful arrests—is what the public should be concerned about. They also accuse the police of being biased toward the shoppers and lenient on pro-Beijing provocateurs who often run up to protesters and yell obscenities in their faces, which often sparks a new cycle of shouting and jostling.

Moderate democracy advocates, seeing the localist agitators, worry that Beijing will overreact to the protests and take the opportunity to further clamp down on the city’s entire pro-democracy movement. Hong Kong’s pan-democrats typically only demand that the spirit of “one country, two systems”—the basis for the tenuous coexistence between a free Hong Kong and the Communist Party-controlled mainland—be maintained. But if the democratic camp is lumped in with nativist hostility toward mainlanders, and the fringe cries for an independent Hong Kong free of Chinese rule, then democrats will find themselves in a highly uncomfortable position.

Hong Kong’s chief executive, the pro-Beijing C.Y. Leung, and chairman of the PRC’s National People’s Congress Zhang Dejiang, have each recently denounced the idea of Hong Kong ever breaking away from the mainland.

HK Indigenous, too, is wary of being perceived to hold this view. Ray Wong says his group is “not for an independent Hong Kong,” but only wishes to “protect Hongkongers.”