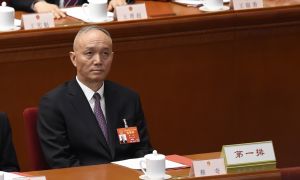 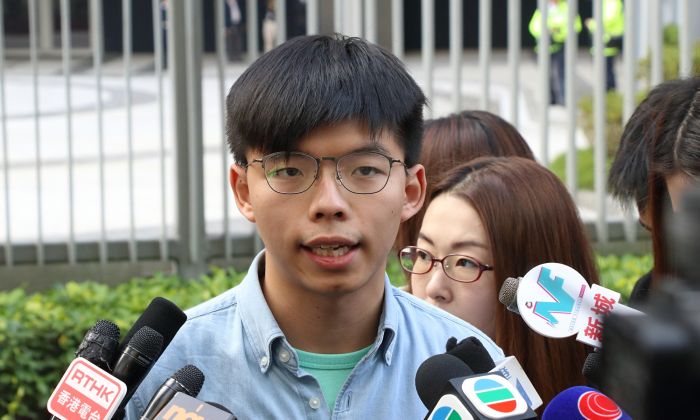 He will then head to Washington DC to testify at Capitol Hill together with Hong Kong singer-activist Denise Ho.

Wong, 22, first rose to international prominence during the 2014 pro-democracy Umbrella Movement, which called for universal suffrage in Hong Kong elections. In 2016, Wong founded a local political party Demosisto, together with other young activists, including Nathan Law and Agnes Ting Chow.

On the morning of Sept. 8 local time, Wong was arrested at the Hong Kong airport before he could board his flight to Germany. Local police said Wong had violated his bail conditions.

Wong, who is active in the anti-extradition-bill protests, was previously arrested on Aug. 30 morning on charges of inciting and participating in an unauthorized assembly. He was released that afternoon after paying bail of 10,000 HK Dollars ($1,275). As part of his bail conditions, he was given a nighttime curfew, but was allowed to travel to Taiwan, Germany, and the United States for already-scheduled events.

Since early June, millions of Hongkongers have protested an extradition bill that proposed allowing people to be transferred to mainland China for trial. The protests have since morphed into wider calls for democracy and an independent investigation into police use of force.

Wong was detained for 24 hours. During a court hearing on Sept. 9 morning, the judge acknowledged that Wong’s bail document had marked the wrong date for permitting him to leave Hong Kong. The judge released him and allowed him to continue on to Berlin.

“The overnight detention was completely unacceptable and inappropriate as it undermined my freedom of movement just because of groundless speculation,” Wong told German media Bild before he boarded his plane to Germany on Sept. 9 morning.

Wong was invited to attend an event sponsored by Bild celebrating human rights activists around the world.

He made the event in time, telling the audience that his city was now a bulwark between the free world and the “dictatorship of China.”

“If we are in a new Cold War, Hong Kong is the new Berlin,” he said in a reception space on the roof of Germany’s parliament building—just a stone’s throw from the Berlin Wall, which for decades occupied the no-man’s land between Communist East Berlin and the city’s capitalist western half.

Wong pledged that his hometown’s protesters would not be lulled into complacency by the decision of the city’s government to formally withdraw the extradition bill, announced on Sept. 4. He also called for international governments to continue supporting the protesters.

“We urge the free world to stand together with us in resisting the Chinese autocratic regime,” he said.

In the following days, Wong is scheduled to meet with German lawmakers and foreign affairs officials. He is also scheduled to deliver a speech at the Humboldt University of Berlin. On Sept. 12, Wong will leave Germany and fly to New York, where he said he will lobby for support for the Hong Kong Human Rights and Democracy Act.

The Hong Kong Human Rights and Democracy Act, which has been introduced in both chambers of Congress in June, proposes requiring the U.S. Secretary of State to certify annually that the city is sufficiently autonomous from mainland China to justify the special treatment currently afforded to it.

Since Hong Kong’s handover from British to Chinese rule in 1997, the United States has dealt with Hong Kong as a separate entity distinct from the mainland in matters of economics and trade. For example, Hong Kong doesn’t face the tariffs that the United States is currently imposing on Chinese imports.

Wong will testify on Sept. 17 before the U.S. Congressional-Executive Commission on China, when the Congress-mandated committee will “examine developments in Hong Kong and the future of U.S.-Hong Kong relations in light of the ongoing demonstrations and the escalating tensions caused by police violence and threats by the Chinese government against Hong Kong’s autonomy,” according to a press release. Wong will join a panel of Hong Kong experts and activists who will speak on the subject.