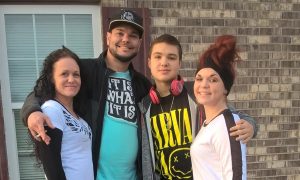 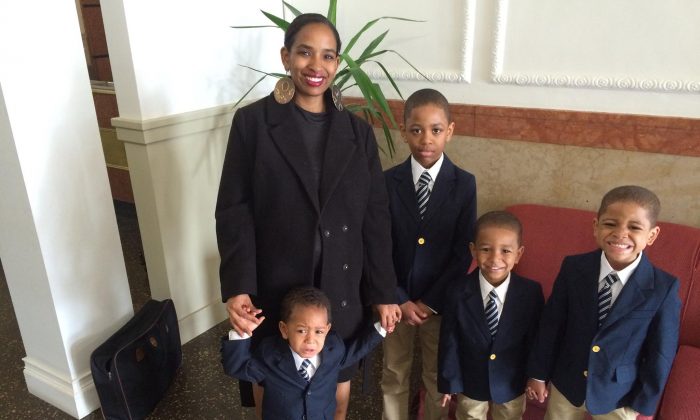 Autumn King with her four children, expecting her fifth. (Autumn King)
US News

Hemerd King hasn’t seen his five children for two years. The New York City government broke up his family due to a string of allegations that, upon basic scrutiny, appear unsubstantiated.

The Epoch Times previously explored the twisted incentives in the system that keeps more than 400,000 children in foster homes and shelters, and de facto encourages social workers and administrators to keep families apart.

Homeschooling families like the Kings are especially at risk. The nonprofit Home School Legal Defense Association (HSLDA) has defended thousands of such families that have faced investigations by Child Protective Services (CPS).

“The number of investigations initiated solely because a family has chosen to homeschool has significantly declined over the past 30 years,” the HSLDA says on its website. “However, many innocent families are still wrongly reported.”

For the Kings, the nightmare started in December 2015 when a social worker from the Administration for Children’s Services (ACS), the New York City’s CPS agency, came to the door of their apartment.

Hemerd couldn’t believe the ACS would have anything to complain about when it came to his family. He let the worker in and, it appeared, she found everything was in order.

It was not until much later he was told that a building contractor tipped off the ACS, which is required to probe each and every report it receives. In hindsight, Hemerd concluded that the building management was behind the tip-off as a retaliation for his complaints about lacking repairs.

The Kings’ case appeared to follow the pattern of a textbook case of abuse in the CPS system.

“When homeschooling families are reported for abuse or neglect, the allegations often include a mention of school attendance as well as other accusations, and in most cases, they are unfounded,” the HSLDA says. “Unfortunately, allegations are often made by family members, neighbors, or acquaintances who are upset with the family and use the child welfare system for retaliation.”

The case appeared to be over, but just being on the CPS radar is already dangerous.

In March, Hemerd went to complain to an older lady who lived in the apartment above his. Her washing machine was leaking into his kitchen—a long-known issue, he said.

She didn’t take to his criticism kindly and called police on him, accusing him of threatening her with an ax and a machete, he said.

Hemerd is a 6-foot-4-inch tall bald black man of athletic build. He would have hardly needed a machete to intimidate a 5-foot woman if he really wanted to, which would also run counter to perhaps every aspect of his persona.

A tailor by profession, Hemerd speaks in a calm articulate manner. His wife, Autumn, studied at New York University, Stanford, and Harvard. As devoted Christians, they boasted a good reputation among neighbors and have no criminal history.

“I haven’t grown up being violent, this is not what I grew up doing,” he said in a phone call. “I understand what some of the stereotypical perceptions are of black men who live in urban centers, but I would rather enjoy a good meal and listen to Wagner or Rachmaninoff and read a good book or study my patterns, cut a suit for someone.”

The responding police officer decided to arrest Hemerd. The issue would likely have been resolved after a few court hearings, but then the ACS stepped in. He said he later found out that the police officer had said she found Hemerd’s children sitting naked “in urine and feces” on sheets of paper on the floor with “knives and scissors everywhere.”

The horror movie-like portrayal of his family would have dissolved under a hint of scrutiny: The children, ages 1 to 8, were actually in their underwear (one in a diaper); the father asked them to put sheets of newspaper on the kitchen floor because of the leak from upstairs; and the knives and scissors? After a thorough search of his apartment, the officers found the tailor indeed owned a set of scissors as well as an ax from the Home Depot and a kukri—a knife with a forward-bent blade that could perhaps be misconstrued as a tiny machete. The woman upstairs likely knew he had these, Hemerd said, since her son saw them in his apartment a few months earlier.

The family decided to move out of the city after the incident, but that made things even worse.

At his third court hearing, Hemerd was jailed and his wife was told he would remain detained unless she handed their children over to the ACS, which accused the family of absconding.

1) Educational neglect. The ACS said (pdf) the family failed to provide homeschooling paperwork, which isn’t uncommon since New York City is known to mismanage and lose the records. The HSLDA even filed a lawsuit in 2016 to force the city to correct the “systematic mistreatment” of families by the “understaffed and underfunded” office that manages homeschooling paperwork for the whole city.

2) Lack of guardianship. Hemerd allegedly left the children alone when he went upstairs to complain to the neighbor, though he said he actually took the children with him.

4) Inadequate nutrition. The children were actually healthy and showed no sign of malnutrition, as proven by several medical exams, Hemerd said.

As for the “knives and scissors everywhere,” the children had no cuts or bruises, he said.

Facing a choice of life on the run with five children, one of them just seven weeks old, Autumn decided to hand the children over instead. She brought them to the Bronx courthouse and saw them taken away right at the entrance. She was put in a cell for a while and then released. Hemerd was released a while later.

If the family asked a family court lawyer for advice at that point, they would have likely learned that the only way for them to ever see their children again was to play along with the ACS.

Social workers wield massive power over families. They can perhaps be reasoned with, but can hardly ever be fought. The laws differ from state to state, but in general, the worker can simply write an affidavit to the family court—no further evidence needed—and get the judge to issue an order to remove the children. Theoretically, the system is set up this way to put children’s needs first. But, as the CPS seems to see it, children, first and foremost, need government services.

The CPS would usually set up a case plan that the family needs to painstakingly follow to get their children back. The plan may include a plethora of “services,” like parenting classes, substance abuse treatment, homemaking services, psychological evaluations, anger management classes, and more. The system differs from state to state—sometimes the family pays for the services, sometimes the taxpayer does. Needless to say, the “services” industry is a booming business. In New York City, the sole services provider under contract with the ACS is the Graham-Windham charity, which was paid nearly $35 million in fiscal 2018.

The family, of course, can challenge the removal order in the family court, but then the justice system is inverted—the parents are, in a sense, considered guilty unless they prove themselves innocent.

When Hemerd saw that their case plan would involve a mental health exam, he reeled. He worried the psychiatrist would fabricate a diagnosis against him in order to create a “record of mental health issues” that would then stay with him for the rest of his life.

He and Autumn decided to fight the ACS in court. That fight is still ongoing.

After going through a few foster homes, their children were placed with their grandmother on Autumn’s side. But that’s been little consolation as she lives in California and hasn’t been particularly close to the family, Hemerd said.

After the court denied them visitations on weekends, the parents haven’t been able to see their children at all. To keep pace with all the court appointments, they both lost jobs before and their work schedule now doesn’t allow them to travel to California in the middle of the week.

After children are in the CPS system for at least 15 of the last 22 months, the agency can start a process to terminate parental rights and offer the children for adoption. The federal government offers cash bonuses for children adopted out of the foster care system, creating an incentive to keep them in more than 15 months for adoption.

This hasn’t happened to the Kings—at least not yet. Hemerd said it’s perhaps because the case against them is so weak that the agency hasn’t yet tried to open the case.

With no end to their case in sight, the Kings have begun to offer help to other families in similar situations. Far from dispirited, they appear galvanized.

“I have no intention of stopping,” Hemerd said.