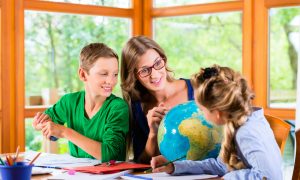 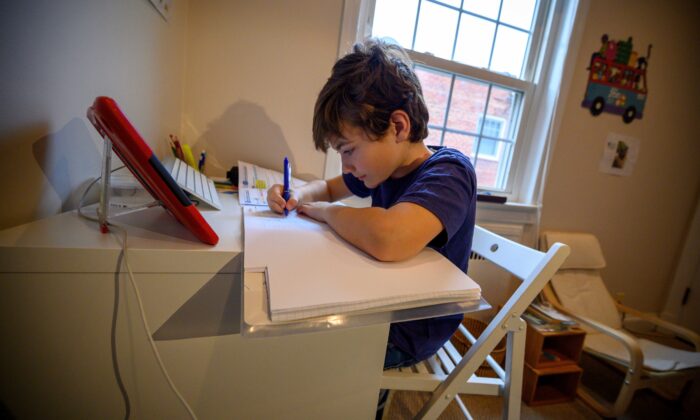 Colin, 10, whose school was closed following the CCP virus outbreak, does school exercises at home in Washington on March 20, 2020. (Eric Baradat/AFP via Getty Images)
US News

The number of American households homeschooling their children has seen a 100 percent increase amid the COVID-19 pandemic, according to a report recently released by the U.S. Census Bureau.

The report is part of the federal agency’s mass-scale online Household Pulse Survey, which asks American families about how the pandemic has affected their lives from education to employment, to food security and household spending, in order to better support the nation’s recovery.

Specifically, the Bureau compared survey results from two seven-day periods in the spring and fall of 2020 to offer a glimpse of the pandemic’s impact on homeschooling.

Last spring (April 23-May 5), about 5.4 percent of U.S. households with school-aged children reported homeschooling, according to the report. By the fall (Sept. 30-Oct. 12), the percentage more than doubled to 11.1. The Bureau noted that household homeschooling rates had remained steady at around 3.3 percent since 2012, citing previous survey results.

The Bureau said the survey purposefully asked the question in a way to ensure households were reporting “true homeschooling,” and not just remote learning at home through a public or private school.

“It’s clear that in an unprecedented environment, families are seeking solutions that will reliably meet their health and safety needs, their childcare needs and the learning and socio-emotional needs of their children,” the report stated. “From the much-discussed ‘pandemic pods,’ to a reported influx of parent inquiries about stand-alone virtual schools, private schools and homeschooling organizations, American parents are increasingly open to options beyond the neighborhood school.”

Among 15 of the nation’s largest metropolitan areas, Detroit (12.0), Phoenix (10.6), and Boston (8.0) saw the most significant increase in homeschooling rates.

While homeschooling rates increased in every racial and ethnic group, the report noted that the change was the most dramatic among black households. The percentage of black families who reported they were homeschooling their children jumped from 3.3 percent in the spring to 16.1 percent in the fall. For Hispanic households, the rate jumped from 6.2 percent to 12.1 percent, and 4.9 percent to 8.8 percent for Asian households, and from 5.7 percent to 9.7 percent for non-Hispanic white households.

The Bureau cited a number of factors that could have been driven American families to homeschool their children, including local homeschooling variation that predated the pandemic, local rates of CCP (Chinese Communist Party) virus infections, and local decisions about how schools are being conducted during the pandemic.

The Household Pulse Survey is currently conducting its third survey, which began Oct. 28, 2020, and is expected to continue through March 2021. Only those whose addresses have been selected by the Bureau to participate can participate the survey.