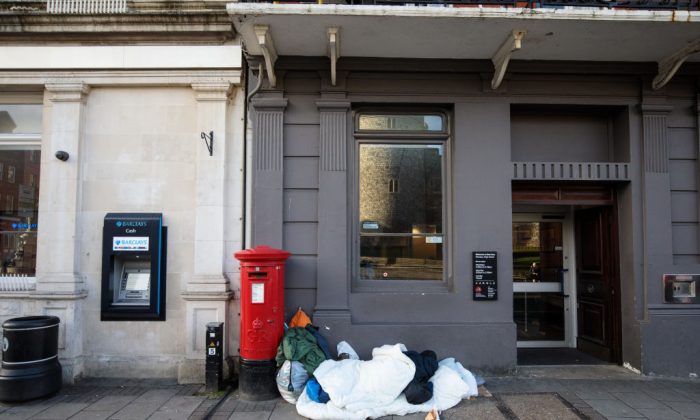 In this file photo a person (not featured in the story) sleeps rough in front of a bank on Jan. 5, 2018 in Windsor, England. (Jack Taylor/Getty Images)
UK

His sleeping bag had been thrown away by local authorities, the homeless man known only as ‘Kev’ told the man who had befriended him on his daily commute.

Two weeks later, he was found dead in a car park.

The body of the 66-year-old was discovered near the town hall by Adam, a local man who had befriended him during his daily commute, in the town of Bournemouth in the south of England.

Adam, who did not give his full name, told the Bournemouth Echo that he fears Kev’s body may have been there for two days.

The local council completely deny the allegation they removed Kev’s sleeping bag—an allegation that is, however, consistent with other stories about homeless people in the local area having their belongings cleared away.

“A couple of weeks ago he said the council took his sleeping bag,”  Adam told the Echo. “They see it as rubbish but they don’t realise these are homeless people; sleeping bags are the stuff that keeps them warm.”

Adam had noticed Kev sitting on a wall at the corner of the road every day on his commute through the town.

“That’s what made me pull over the first time—I stopped to ask him if he was OK and we got talking.”

On discovering that Kev’s daily routine involved a walk up a hill, Adam began to give him a lift in his car instead, believing Kev found the walk difficult.

“I wondered, if I gave him some money, would it go on drugs and alcohol but to be honest he never did any of that, just smoked roll-ups,” said Adam.

He said he would buy Kev food, occasionally give him £10, and even bought him a winter coat.

But he said that Kev “never, ever asked for anything from me.”

On Monday morning, when Kev didn’t appear as per their routine, Adam thought he might still be sleeping and walked over to his spot.

“I said ‘Kev’, put my hand on him to shake him, and that’s when I knew something was wrong and my heart sank.”

Adam thinks his body could have been there for two days.

The head of a local charity, set up after three homeless deaths in the town five years ago, confirmed that there were reports of the local authorities removing sleeping bags.

“Kevin was a lovely man, he came to the soup kitchen four days a week, never asked for anything and was always grateful for what he got,” Claire Matthews, founder of Hope For Food told the Metro.

“We give out sleeping bags to homeless people and we’ve been told by some of them the council has removed them to clean up the streets.”

Police confirmed that a homeless man had been found dead on the morning of Monday, Jan. 22 in Braidley Road car park, according to reports. “It is not believed there are any suspicious circumstances and the coroner has been informed.”

According to the Guardian, Kev been unwell prior to his death and his final words to a soup kitchen volunteer were, “If I wake up, I wake up. If I don’t, I don’t.”

Councillor Robert Lawton told the Guardian, “To be clear, we can confirm that the council did not remove his bedding and belongings and we have been attempting to engage with him for the last 10 years.”

A council spokesperson told the paper said that they do have a protocol for removing “unattended items” but give due consideration to rough sleepers.

“Our staff will, providing the item is non-hazardous, give a period of time for people to return for their belongings”.