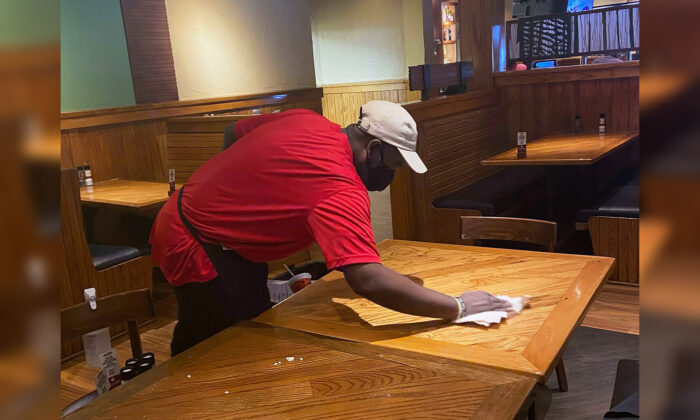 A Texas community came through for a homeless man in need after a social media post shared his story.

Kenneth Smith went from sitting outside an Outback Steakhouse to busing tables for the same restaurant—but most importantly, he found hope.

It all started with a gift card.

A concerned customer saw Smith dozing in a chair outside the eatery, approached him, and asked if he was OK. Smith admitted he wasn’t.

“I’ve been homeless for a good four years,” he later told NBC. He’d been left wondering, “How am I going to get a meal? Who am I going to turn to? Who can I ask?”

The sympathetic customer handed him a $100 gift card for the restaurant.

Thus, swapping his chair outside for a booth inside, Smith got to chatting with the venue’s partner, Laura Hodges, a mother of three, who was moved by his story. She said she didn’t want him to go hungry.

Hodges gave him continued sustenance for close to five months—until he got an idea and asked Hodges for a job. When one became available, she didn’t hesitate.

Since early March, Smith has been busing tables six days a week.

It’s a chance, he said, to change his life for the better. “This is a whole new beginning that God has blessed me with,” he told ABC, “so I’m trying to get on this right good track that He wants me to stay on.”

Knowing Smith’s need to be still greater, Hodges took to social media and posted on the Fort Worth Foodies Facebook page, querying about affordable lodging.

“I’ve recently employed a homeless gentleman,” she posted. “He is wonderful and works very hard … He is just trying to get a fresh start.”

Netizens responded and surpassed her expectations, donating cash, a bicycle, and clothes for Smith. They even paid for six weeks at an extended-stay hotel close to the steakhouse, along with groceries and kitchen supplies.

“All they wanted to do was throw assistance out there and resources in any way that they possibly could,” Hodges said. “I’m blown away by the generosity of people. It’s absolutely amazing.”

Smith’s new job has since sparked a dream: He hopes to run his own food service one day. For now, though, he is saving for a car and, eventually, a home.

“I sometimes walk out them doors and glance at the chairs,” said Smith. “I be like, ‘Man, I used to sit in those chairs.’