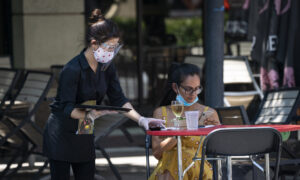 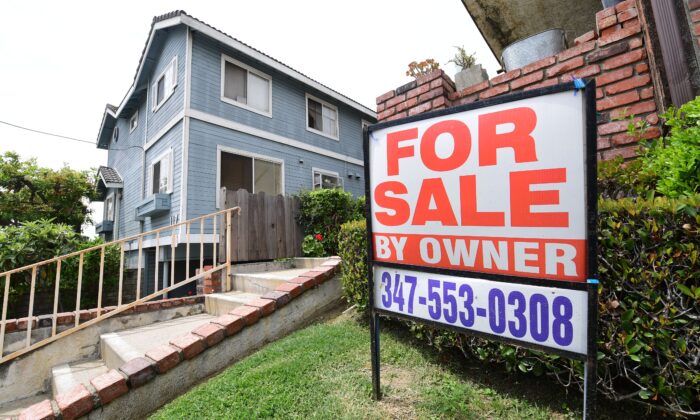 A "For Sale by Owner" sign is posted in front of property in Monterey Park, Calif., on April 29, 2020. (FREDERIC J. BROWN/AFP via Getty Images)
Economy

WASHINGTON—The real estate market is seeing strong signs of a rebound after being hammered by the COVID-19 pandemic and related lockdowns across the United States.

Despite the recession, home purchase demand is strong, as buyers are trying to take advantage of the record low mortgage rates, although the pandemic may result in a weakening market later this year.

Mortgage rates dipped to record low levels after the Federal Reserve cut its benchmark rate to near zero. And robust demand coupled with tightening supply has helped prop up home prices.

“Despite unprecedented job losses in a wide swath of industries across the country since the COVID‐19 pandemic arrived in the United States, home price growth has unexpectedly accelerated,” Scott Anderson, chief economist at Bank of the West wrote in a report.

“The housing market today is not characterized by loose lending standards, low or no down payment mortgages, a preponderance of subprime loans, and highly‐leveraged homeowners like it was in 2008,” Anderson said.

And unlike the pre‐Great Recession era, the housing market entered this downturn undersupplied rather than oversupplied.

Another factor pushing home prices higher is the federal government stimulus program. The income support for small business owners and the enhanced unemployment insurance benefit have boosted the demand for home purchases, according to Lawrence Yun, chief economist at the National Association of Realtors (NAR).

The association reported that pending home sales surged 44 percent in May after two months of decline.

“The demand is exceptionally strong, far higher than what I anticipated,” Yun told the show “NTD Business.”

“2019 was considered a very good, respectable year. But here we are in the midst of the pandemic; sales activity appears to be stronger than last year’s figures.”

According to Yun, home prices are being pushed up across the board with the exception of the New York City area and San Francisco, where the prices were already high.

The CCP virus outbreak has also altered buyers’ preferences about locations and features.

“We are definitely seeing some shift away from the city and toward larger-size homes,” Yun said.

According to a survey conducted by the NAR, 24 percent of realtors said their clients wanted to move away from cities to suburbs, rural areas, and smaller towns. Thirty-five percent of NAR members also indicated that buyers preferred larger homes to accommodate more family members and have a dedicated office space.

Experts say, however, that continued high unemployment could be a drag on purchase activity and home prices after the summer.

“If somehow the job creation pace is slow and the stimulus package is pulled out, then we could run into some complications,” Yun said.

A rise in foreclosures at the end of this year could also increase the number of homes for sale and put downward pressure on home prices next year.

The CARES Act, passed to provide financial relief to those affected by the pandemic, provided stressed homeowners the option to request up to 180 days of forbearance, meaning they can either reduce or pause payments on a federally backed mortgage loan.

According to Black Knight, more than 4.1 million homeowners were in mortgage forbearance plans as of July 7. These mortgages represent nearly $900 billion in unpaid principal, or 7.8 percent of all active mortgages.

“The home price weakness is expected to accelerate once the forbearance window closes later this year,” Anderson stated.

“By early next year, home prices should be on a widespread decline from a year ago, though our baseline forecast is we will not see the magnitude of home declines we saw in 2008 and 2009. We are forecasting, national home price declines of around 4.2 percent year‐on‐year by the second quarter of 2021.”

However, this expected decline could be pushed further into the future if the government provides further support or extends mortgage forbearance, he said.