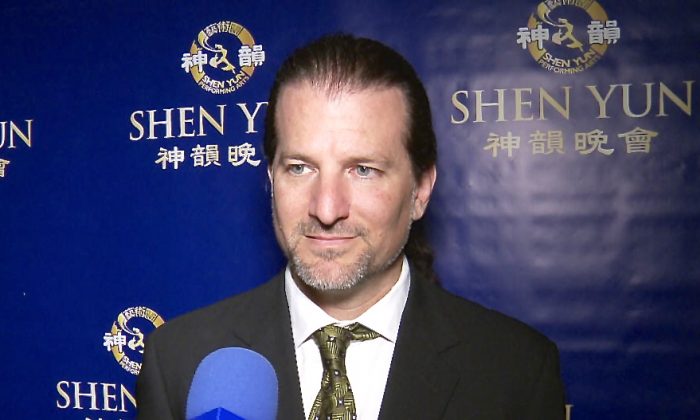 Jim DeCicco shares his Shen Yun experience at the Segerstrom Center for the Arts, on March 12. (Courtesy of NTD Television)

COSTA MESA, Calif.—”The Shen Yun performance was really, really unique. It was mind blowing, really,” said Jim DeCicco after seeing Shen Yun at Segerstrom Center for the Arts, on March 12. He and singer Kim La Chance saw it together.

Ms. La Chance is the creator and host of the Real Healthy Living TV Series, and founder of a health and beauty product line “Bodywork Therapies.” She made her mark in the music industry singing with the rock group “Vixen,” with former Megadeth guitarist Marty Friedman.

Both were amazed, and completely taken by the Shen Yun performance.

Mr. DeCicco said, “Between the colors of all the myriads of costumes, and synchronizing the dance with the music, and the technology with the video and the backdrop, it was really, really, unique, but so elegant too.”

Ms. La Chance, who was a lead singer and stage performer, poured out her enthusiasm. “The athlete dancers basically were just superb. The costumes were so beautiful and colorful and sparkly.” According to the Shen Yun website, “Every costume in a Shen Yun performance is presented with brilliant colors, displaying a splendid spectacle—from the Tang Dynasty’s “Raiment of Rainbows and Feathers” to imperial dragon robes, phoenix coronets, and cloud capes.”

As a musician, Ms. La Chance responded to the orchestra, the erhu soloist and the singers. She said, “I love it, and the music is just phenomenal! What’s the name of that one instrument that she played solo? Erhu? I’d love to learn it. It’s so beautiful! It has such a beautiful voice to it. And the sopranos … they don’t need a microphone, their voice just projects so beautifully across the whole auditorium.”

The Shen Yun Orchestra combines distinctive Chinese sound with the grandeur of the Western Symphony, according to the program.

“It was fabulous and how the video was locked up with what was happening with dancers and how they popped up onto the video screen, that was just genius! Genius! Just phenomenal!” said Ms. La Chance. “The dancers appear to fly into and emerge from the projected digital backdrop.”

Mr. DeCicco spoke as an expert in the arts. He said a great performance goes beyond technical perfection, and Shen Yun did that. He said, “Being a professional and recognizing detail, great performances are ones that transcend that; where you’re so immersed in the actual content that you don’t think about the technical anymore. You don’t’ think about the lights, or the music, or some of the cues, or whatever it is. You’re just truly present, and enjoying the thing. And that’s what this performance did. “

To him, all the details formed a whole, “how well everything worked together between the dancing and the costumes and the details on the costumes as well. To make costumes that are going to work for this type of range of movement and yet such incredible detail and little ornaments, headdresses and all the little details. It was so seamless.”

“Shen Yun’s productions draw their inspiration from China’s 5,000 years of civilization,” according to the program. As the Shen Yun website explains, “Forcing atheism upon society, the Chinese Communist Party has for decades launched various campaigns—most notably the Cultural Revolution—to destroy not only cultural sites, temples, and relics, but also the Chinese people’s belief in virtue and faith in the divine.”

Mr. DeCicco responded to that theme. He said, “You’re watching such brilliant colors and such a light energy, and then when they’re depicting the scenes of where communist China representatives are confronting, you see the dark energy and the skies going cloudy and the attitude that they are, stylized.” He was speaking of the dances The Steadfast Lotus, and Buddha’s Compassion Shines Forth, which are set in contemporary China.

“It becomes such a contrast and it makes you think about how much we maybe take that for granted when we see that in modern day that we think it’s ok, we think it’s normal, when really what’s more normal and what’s more natural to the soul is what’s happening without that.

“It’s more of back to the roots of ancient Chinese philosophy, Chinese wisdom, things that so much of the Western world is seeking to find as a philosophy of life. And it’s good to see that there’s such a movement to get that refreshed in the modern day,” he said.

Ms. La Chance said, “I’m so honored to be here tonight and to be a part of the community that’s coming up in support of these people who are in dire circumstances in China.”