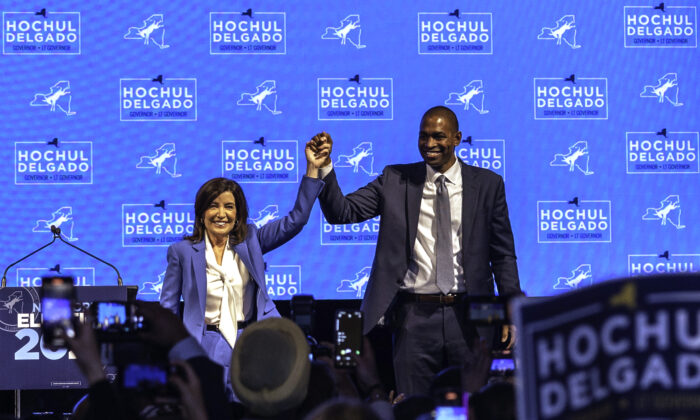 “I’m not here to make history. I’m here to make a difference,” Hochul said shortly after Fox called her the winner. She recalled how her parents “started out married life in a trailer park” but “rose up through hard work.”

“I’ve had the honor of a lifetime becoming the first woman to lead this state,” she said.

During her victory speech, she said, “I have felt a weight on my shoulders to make sure that every little girl and all the women of the state who’ve had to bang up against glass ceilings everywhere they turn, to know that a woman could be elected in her own right and successfully govern a state as rough and tumble as New York.”

The race has proved to be the most competitive statewide contest that the Empire State has seen for nearly three decades since Republican George Pataki pulled off an upset victory in 1994.

Speaking just before midnight, Zeldin did not concede the race. He wished his mother a happy birthday and reminded supporters there were still 1.4 million votes waiting to be counted, which ignited chanting and applause from the crowd.

“We have been crushing the election day overall across the entire state,” he told supporters at a watch party in midtown Manhattan, noting that his margins had been going up as the hours went on.

“New Yorkers are hitting their breaking point,” he said, adding that he’s been bringing out this message “without apology or regret.” “We came to this with a passion to have a debate of ideas for a better direction for New York,” he said.

Hochul secured her win despite being hit hard by her opponent during the final weeks of campaigning on allegedly being soft on crime, an issue of concern for many New York voters.

A native of Buffalo, Hochul stepped in as governor last August after Cuomo resigned amid sexual assault allegations. She had placed a major focus on abortion access and attacked Zeldin’s ties with Trump, but Zeldin’s gains in the polls brought a shift in her messaging.

In recent weeks, she has promised to hire 1,200 transit officers to prevent transit crimes, install cameras on train cars, and keep illegal guns off the streets.

But Janice Lynch, a 63-year-old attorney living in the upper east side and Zeldin supporter, is not convinced that Hochul can deliver.

“Guns off the street is not the answer,” she said. “Criminals are always going to be able to get guns no matter what, so that’s not going to make a difference. She can’t do anything. She can pass all the anti-gun laws she wants.”

She said that she has been taking Uber because she’s “really afraid to get on the subway.”

“It’s really not right. This is not the way the city is supposed to operate,” she told The Epoch Times at Zeldin’s watch night event in midtown Manhattan.

Zeldin, 42, who grew up in Suffolk county and served in the United States Army Reserve, hit the campaign trail about one year and a half ago.

His bid was seen as a longshot. But with a pitch centered on crime, public safety, and rising prices, issues being near the top of issues for voters, Zeldin had steadily closed in on Hochul, narrowing her lead from 24 percent in June to single digits in recent weeks.

In the liberal New York where Democrat enrollment outnumbers Republicans two to one, and where Hochul’s predecessor Andrew Cuomo won the office by 24 points, Zeldin’s momentum had kept the Democrats on edge. On Nov. 4, the Democratic Governors Association created a new super PAC to boost Hochul’s standing.

While significantly outraised by his rival, Zeldin has galvanized support from outside groups who together injected around $20 million into two super PACs backing him. Data from AdImpact show that Zeldin and his allies pumped $8.3 million on ads over the past week compared to about $5.2 million from Hochul’s side.

New York’s crime issue twice hit home for Zeldin during the race. His 16-year-old twin daughters had to hide in the upstairs bathroom and call the police after a drive-by shooting near his front porch in October. In July, Zeldin was attacked on stage in western New York by a man brandishing a keychain with two sharp points. The accused attacker, David Jakubonis, was initially held for hours before being released on his own recognizance under a 2019 state law reform that waives bail for most misdemeanors and non-violent felonies.