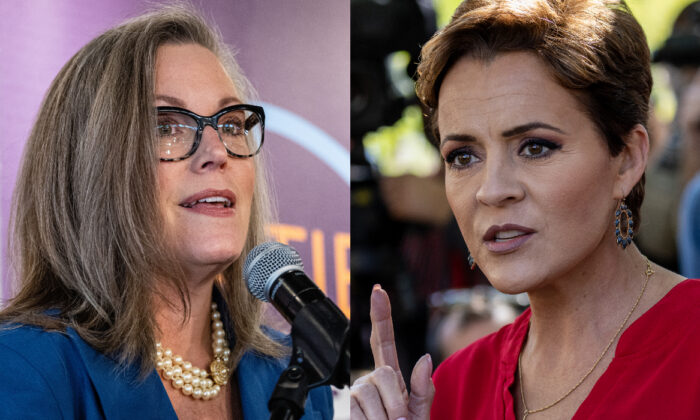 Republican Kari Lake has narrowed Arizona Secretary of State Katie Hobbs’s lead in the state’s race for governor in a Nov. 15 update.

Hobbs’s lead of 19,382 narrowed to 17,249, according to unofficial results from the office of Hobbs, a Democrat, based on new reports from Maricopa County and other jurisdictions. Hobbs gained nearly 9,700 votes in the new tranche, while Lake gained 11,829.

Hobbs now has 1.276 million votes, while Lake now has 1.259 million. The margin between the candidates is about 0.6 percent, close to recount territory.

Under a new Arizona law, a recount is triggered if the margin is at or below 0.5 percent when all the votes are counted.

Some 27,545 uncounted ballots remain, according to the office of Hobbs, who is Arizona’s top election official. That estimate may not be reliable, however—the estimate was 28,033 before the latest count, but more than 20,000 votes were reported.

According to the estimate, 11 Arizona counties have ballots that need counting. Maricopa County, with 12,277, has the most uncounted ballots.

However, according to the Maricopa County election website, 16,830 ballots still need to be counted.

The secretary of state site “only shows votes for the named candidates on the ballot,” a Maricopa County spokesperson told The Epoch Times via email. “Write-ins, undervotes, and overvotes are tallied in our totals.”

A spokesperson for the secretary of state’s office didn’t respond by press time to a request for comment.

Hobbs declared victory this week after media outlets, including The Associated Press, called the race for her. Lake hasn’t conceded.

“I want to thank the voters of Arizona for entrusting me with this immense responsibility. It is truly the honor of a lifetime, and I will do everything in my power to make you proud,” Hobbs said on Nov. 15 at what was described as a victory rally.

“For those Arizonans who didn’t vote for me, know that I will work just as hard for you.”

“Spent hours last night working with Lake team on a continuing war for Arizona. She will not go quietly into the night. She intends to stand and fight,” Brown wrote.

“She knew when she entered this race that it would be tough. Her opponents lack her courage. She is fighting for us.”

The winner will succeed Republican Gov. Doug Ducey, who was prohibited by term limit laws from seeking reelection.