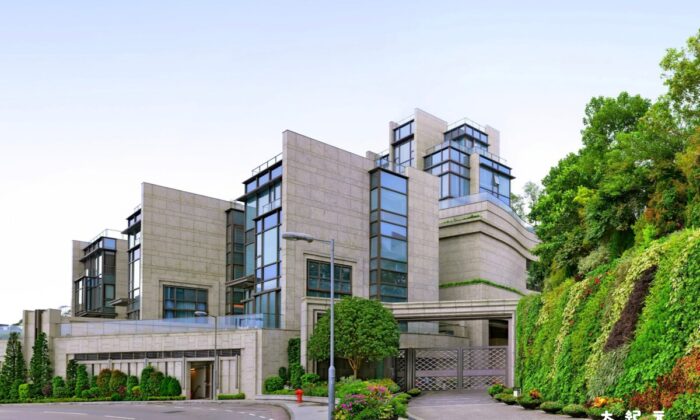 The villa at the Twelve Peaks project at 12 Mount Kellett Road in Hong Kong owned by Chen Feng, chairman of China's HNA Group, has recently been placed up for sale on foreclosure. (The Epoch Times)
HK Current Affairs

The assets of bankrupt HNA Group are being sold off by creditors, including the luxury villa in Hong Kong’s most affluent residential location at Twelve Peak that belonged to Chen Feng, the group’s co-founder and chairman.

According to the Hong Kong Land Registry, house 6 developed by Twelve Peaks was taken over on Oct. 15 by Upper Genius Limited, the immediate lender to HNA, who appointed PricewaterhouseCoopers (PwC), a firm specializing in liquidation, as the receiver of the house.

The Chen family is linked to the former head of the Chinese Communist Party (CCP) Jiang Zemin—a rival to the current head Xi Jinping—through his faction under Zeng Qinghong, said FTV news, a Taiwan media.

Chen Feng was arrested by Hainan police on Sept. 24, after HNA Group declared bankruptcy on Jan. 29.

Assets in Hong Kong Being Sold at a Loss

The house in Twelve Peaks will be sold at public auction, in the same way as the 45th floor duplex in Mid-Levels West, a property previously owned by Chen Feng, which sold by foreclosure in October 2020 for HK$312 million ($40 million). It was devalued by nearly 30 percent or HK$120 million ($15.4 million) compared to the 2015 purchase price.

According to the information in the Hong Kong Land Registry, the Mid-Levels West unit sold in June 2015 for over HK$433 million ($55.3 million). The buyer was Billion Able Corporation Limited, with Chen Feng being the sole director, while HNA Group acted as the property mortgage guarantor at that time.

House 6 in Twelve Peaks has been put up for sale for approximately HK$510 million ($65.5 million), close to the 2015 purchase price of over HK$506 million ($65 million), according to Hong Kong Oriental Daily News.

“If the property is sold at this price, it is expected to incur a loss of over HK$50 million ($6.4 million) after deducting taxes and miscellaneous expenses,” Sammy Po, chief executive officer of Midland Realty’s residential division, told The Epoch Times, adding that some luxury home sellers, when they need capital quickly, their pricing is often relatively flexible.

HNA already sold some plots of land near Hong Kong’s former Kai Tak International Airport for about HK$22.3 billion ($2.8 billion), a huge loss compared to its acquisition price of HK$27 billion ($3.47 billion), according to the BloombergQuint, an Indian financial media.

In addition to Chen Feng, many mainland conglomerates and tycoons are keen to invest in property in Hong Kong, particularly in the luxury residential market.

Fred Hu, the founder of Primavera Capital Group, spent HK$428 million ($55 million) on a luxurious residence located in Tai Tam, a famous area of southern Hong Kong, according to the Hong Kong Land Registry, according to Bloomberg.

Some mainland Chinese tycoons regard their exclusive residential units as collateral for assets or debts in times of need. House 6 in Twelve Peaks has been mortgaged several times to different companies for loans, as in July 2015 to China Everbright Bank, and in 2018 to CSI Finance Limited, then afterward to Upper Genius Limited in 2020, according to Ming Pao.

The Epoch Times consulted with a number of real estate companies and experts in Hong Kong. They said that the massive sales of luxury property have not yet emerged.

However, it is noteworthy that the representatives and brokers kept silent about the mainland Chinese consortium’s property transactions, some saying that they were not at liberty to disclose information.

“What’s more, Hong Kong has a separate system for real estate transactions and mortgage liquidation auctions. So no matter who the seller is, basically the mainland side would not be involved [in the case].”

It is likely that, by investing in the Hong Kong property market, mainland conglomerates can conveniently dispose of their assets and sell them to offset debts at any time, without being restrained or interrupted by mainland China’s severe legal regulations.