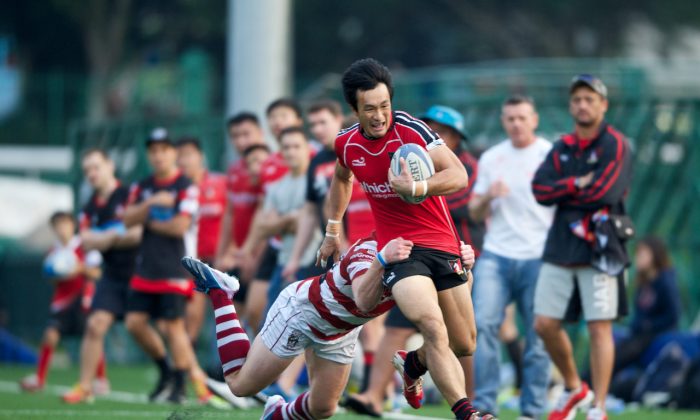 WhichWay Valley and Hong Kong winger Salom Yiu on his way to scoring in their match against Abacus Kowloon in the HKRFU Paul Y Premiership at Happy Valley on Saturday Dec 7, 2013. Valley won the match 26-13 to move them onto 31 points in the league and retain the Broony Quaich trophy. (HKRFU)
International

Leighton Asia Hong Kong Cricket Club won 31-20 against Newedge Club in the Hong Kong Rugby Football Union Premiership on Saturday Dec 7 to give the standing’s leaders their seventh win out of eight games.

Significantly, HKCC are now on 34 points, three ahead of WhichWay Valley (31) as the league takes its Christmas and New Year break.

Valley scored with tries by Lee Jones and Salom Yiu, while Ben Rimene kicked 4-penalties and two conversions to add 16 points. Kowloon were held down to 13 points allowing Valley to retain the Broony Quaich Trophy over the festive period.

With five points the maximum possible outcome from a victory and three points separating them, the HKCC and Valley wins were most important considering that they have a postponed match outstanding.

Next Matches
The Premiership now takes a break for the festive season and will restart with what could be the defining match in the league’s season – the postponed match between Valley and HKCC on Tuesday Jan 7, 2014 (venue not yet decided).

Round 10 of the competition is on Saturday Jan 11.