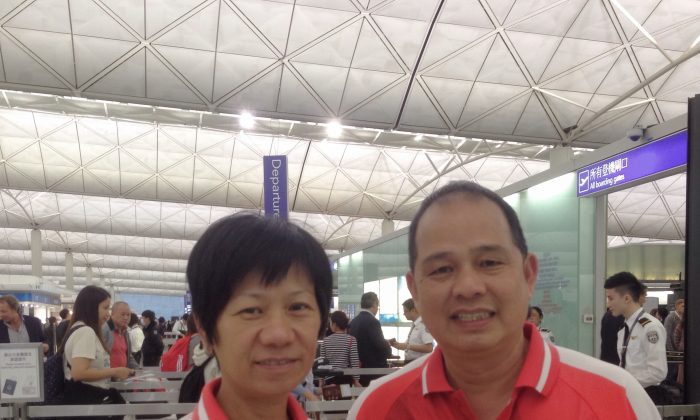 Hong Kong bowlers Celena Kwok (left) and Stephen Chan when they departed for Australia to participate in the 11th World Cup Singles Championship on April 10, 2015. They faced a formidable task with thirty seven elite bowlers from 21 countries taking part in the event from April 15-23. (Herbert Kwok)
HK Lawn Bowls

Hong Kong bowlers realised the gap between themselves and the world on artificial greens for the second year in a row when both the man and woman representatives suffered heavy losses at the World Cup Singles Championship in Australia.

Hong Kong was represented by the National Indoor Singles champions Stephen Chan and Celena Kwok at the competition, which has elite bowlers from 21 countries to participate.

Chan started well, won two of the first three games against Japan and Isle of Men to maintain his push for the play-off. However, it proved that this was the best he can do and he went on to lose the following six games. He finished 8th in a group of 10.

Kwok lost the first five games in a row and restored some pride by beating Macau and Canada in the last two games. She finished 7th at the group of eight.

While the final standing of the bowlers were not released as the competition was still underway, it is believed that the results will be close to the one registered last year, when Hong Kong male bowler CL Fung finished 19th out of 21 and lady bowler Tammy Tham finished 19th out of the 23 contestants.