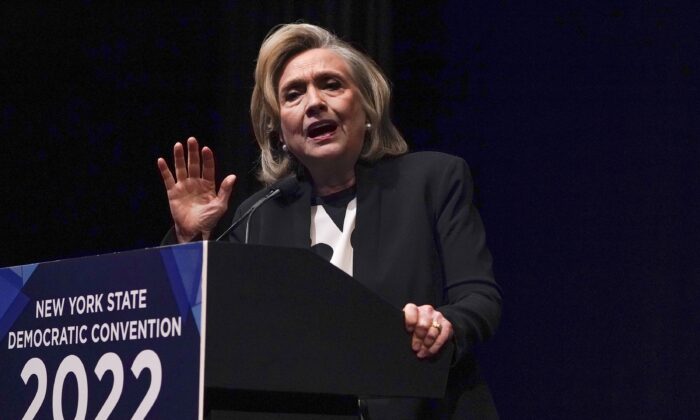 Hillary Clinton’s presidential campaign is moving to intervene in a case brought by special counsel John Durham against Michael Sussmann, a lawyer who represented the campaign when he brought information to the FBI alleging a link between Donald Trump and Russia in 2016.

At the time, Clinton was the Democratic presidential nominee and Trump was the Republican nominee; Trump went on to win the election.

Federal prosecutors are seeking to compel Clinton’s campaign, the Democratic National Committee (DNC), and Fusion GPS, the firm they hired to conduct opposition research on Trump, to produce documents that the government may want to admit during the trial of Sussmann, who has been charged with lying to the FBI for allegedly claiming he wasn’t bringing the derogatory information about Trump on behalf of a client.

The campaign, the DNC, and Fusion have asserted privilege over the documents, which include communications between Perkins Coie, a law firm hired by the Democrats, and Fusion.

However, a claim of privilege, or an assertion that the documents should be withheld because they are attorney-client communications, falls short, Durham’s team alleges in a recent filing.

“The government does not dispute that [Fusion] conducted opposition research regarding Trump’s purported ties to Russia at the behest of the Clinton Campaign and the DNC through a retention agreement with [Perkins],” prosecutors said. “But in doing so, [Fusion] was not primarily providing or supporting expertise relating to legal advice; instead, it appears that the investigative firm’s primary, if not sole, function was to generate opposition research materials that the firm then shared widely with members of the media, the U.S. State Department, the Department of Justice, the Federal Bureau of Investigation (‘FBI’), members of Congress, and others.”

The opposition research resulted in the so-called Steele dossier, which made a series of unsubstantiated claims about Trump and Russia that special counsel Robert Mueller was unable to prove.

One of the claims—about a supposed secret channel between Trump and Russia’s Alfa Bank—was disproven by the CIA in 2017, recent filings in the case revealed.

In the new filings, Clinton’s campaign challenged the portrayal by prosecutors, arguing that the government is trying to obtain materials that are protected.

The campaign “asserts its attorney-client privilege and the attorney-work-product protection with respect to all documents and information under the control of Perkins Coie or any of its consultants, including Fusion GPS” and “is not waiving any of its privileges, and it opposes the government’s motion to compel,” John Podesta, chairman of the campaign, told the court in one filing.

In another filing, Robby Mook, who served as campaign manager, said that one of the topics on which Perkins provided “legal services and legal advice” to the campaign “involved fact-finding and research that the campaign conducted regarding” Trump.

“Although I was not aware during the campaign of any contractors that Perkins Coie engaged to assist it in providing legal services and legal advice regarding this work, I did believe throughout the campaign that whatever work Perkins Coie performed, either through its own professionals or through any contractors it may have engaged to assist it, the work was done for the purpose of providing legal services and legal advice to” the campaign, he added.

The campaign and the DNC in February agreed to pay fines after the Federal Election Commission determined they likely violated federal law by misreporting payments to Perkins.

The campaign had said it paid Perkins Coie for “legal services” while the DNC had described payments to the firm as being for “legal and compliance consulting.”

Because the money actually went to Fusion for the opposition research, the entities failed to follow a law that requires political campaigns and groups to define the purpose of each payment, according to a complaint, which prompted the commission investigation.

Neither the campaign nor the DNC admitted wrongdoing when paying the fines, though Marc Elias, who was with Perkins Coie until 2021, has acknowledged under oath to the House of Representatives that the money to retain Fusion came from the campaign and the DNC.

In a separate declaration that was partially redacted, Elias told the court that Fritsch and Simpson reached out to him in the spring of 2016 and at some point after that, Perkins Coie engaged Fusion.

Elias recalled thinking that Fusion would help him in his work for the campaign, and that on some occasions, the firm’s work “was distilled and incorporated into my judgments about legal issues, while in other instances, I shared the results of Fusion’s work with my clients.”

The campaign said an unredacted version of the Elias declaration could be submitted to the court to review behind closed doors, alleging the redactions were made because the material being hidden was itself subject to privilege claims.